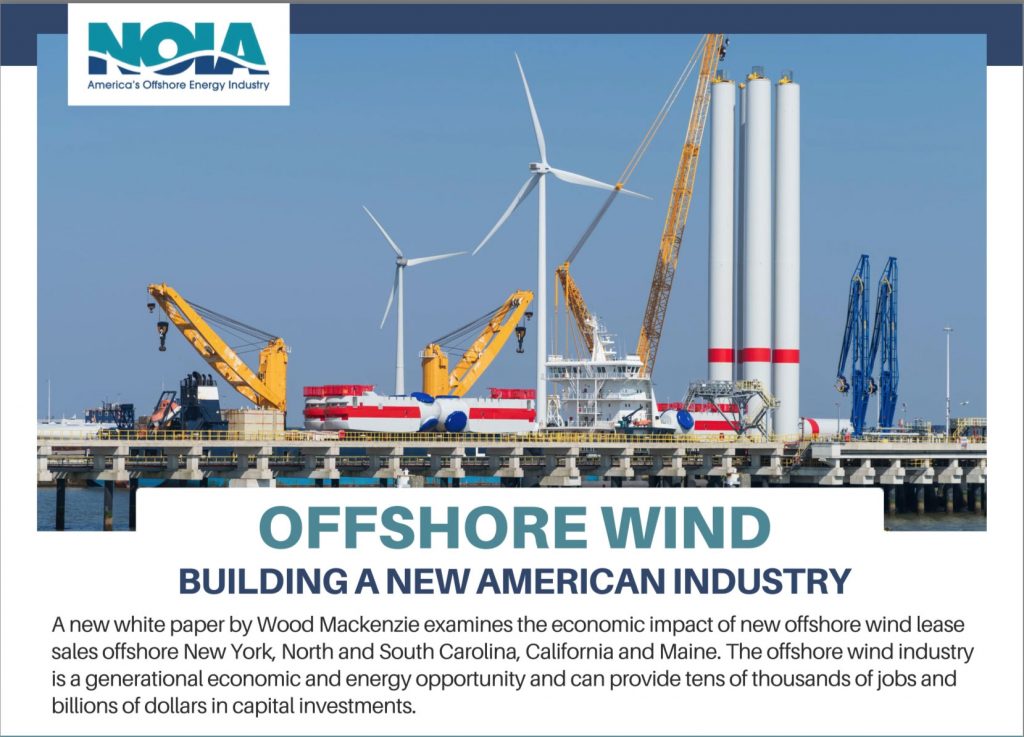 The United States has an opportunity to accelerate offshore wind energy growth and benefit from 28 new GW of clean energy and $1.7 billion in U.S. Treasury revenue by 2022, a recent study released from research group Wood Mackenzie finds.

Findings from this study confirm additional lease areas are needed to meet demand, reduce energy costs, increase competition, and ultimately generate thousands of jobs and billions in investment. Additionally, the findings offer guidance to decision-makers about new offshore wind leases, which can be a short-term solution to jump start recovery from a coronavirus pandemic-driven economic slowdown.

Commissioned by four energy industry groups, American Wind Energy Association (AWEA), National Ocean Industries Association (NOIA), New York Offshore Wind Alliance (NYOWA), and the Special Initiative on Offshore Wind (SIOW) at the University of Delaware, the study dives into the economic impact of offshore wind activities as a result of potential Bureau of Ocean Energy Management (BOEM) lease auctions in 2020, 2021, and 2022. Based on existing activities and policy assumptions for future offshore wind development, 2 million acres of federal waters in the New York Bight, which includes parts of New Jersey, as well as California and the Carolinas, could be auctioned for commercial leases as early as this year into 2021. Such leasing could support 28 GW of offshore wind development and generate $1.2 billion in U.S. Treasury revenue. Other auctions for lease areas in the Gulf of Maine and areas in California could happen in 2022 and would generate an additional $500 million in U.S. Treasury revenue.

“Policymakers at the Federal and State levels right now hold the key to unlocking the full potential of the offshore wind industry that will benefit all Americans,” said Laura Morton, AWEA senior director of Offshore Wind. “We’re on the cusp of a rare opportunity, but the U.S. remains far behind other countries in harnessing offshore wind technology. It’s time for us to unleash this abundant domestic energy source that will deliver tens of thousands of new jobs, revitalize coastal ports, and expand manufacturing opportunities, to reap major economic and environmental benefits.”

In addition to delivering clean energy to millions of households, the offshore wind industry will also contribute a variety of economic benefits to the U.S. economy, including supporting thousands of jobs and billions of dollars in capital investment. If the assumed BOEM auctions in 2021 and 2022 happen, total full time equivalent (FTE) job creation from the resulting offshore wind activities, including development, construction, and operation will be approximately 80,000 jobs annually from 2025 to 2035.