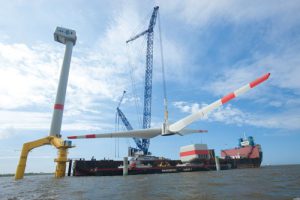 A Terex CC6800-1, owned by MAXIKraft Kran- und Schwerlastlogistik GmbH, recently removed the rotor and nacelle of a 5MW wind turbine at a height of 90 meters. The assignment, which was performed on behalf of wind farm operator BARD, was part of a series of repairs at the Hooksiel offshore wind farm where the turbine was located.

The very start the MAXIKraft team was faced with a series of unique challenges. “To start off with, an offshore lifting operation is obviously much trickier than a land-based assignment, since the wind and sea can act up at any moment and cause a great deal of instability,” says crane operator Raik Hanisch. During the project the heavy-lift pontoon Giant 4 was in charge of bringing the Terex CC6800-1 to the site, just offshore of Hooksiel in the north of Wilhelmshaven. It also became responsible for providing the stability required for a total of four lifting operations. The first operation consisted of removing and lowering the turbine’s 170-tonne rotor, which had a diameter of 127 meters, so that the 280-ton nacelle could be removed during a second lifting operation. Once the repairs were completed the components were lifted and installed back on the tower in the opposite order.

The MAXIKraft team used an LFVL boom configuration to tailor the crawler crane to the job. The combination of a 90-meter main boom and an 18-meter fly jib allowed the unit to easily reach the required working height. Meanwhile, a 250 ton counterweight on the superstructure in addition to a 80 ton central ballast on the carrier and a Superlift ballast weighing 240 tons allowed the crane to operate freely within a working radius of 22 meters, making it possible to complete all work right on schedule. “The way the project moved along smoothly showed that the Terex CC6800-1, with its capacity and its enormous flexibility in the way it can be configured, should be the first choice of anyone who is planning to lift this type of large weight,” says project manager Steffen Lehmann, “and also when working under difficult operating conditions.”

The 1,250-ton Terex CC6800-1 lattice boom crawler crane, featuring a maximum load moment of 13,952 mt, is designed for industrial operations worldwide. Its components, which have been dimensioned for a maximum transportation width of 3 to 3.5 m and feature low transportation weights ranging from 15 to 50 tons, allow for worldwide, cost-effective transportation. More information on Terex can be found at www.terex.com.