Elk City has always been a shining example of “Western Hospitality”. It comes natural when you come from a proud, pioneering history combined with a quality of life that makes Elk City an ideal place to live and work.

Elk City’s history dates back to the days immediately following the opening of all surplus land of the Cherokee Outlet in 1892 when the first men made their appearance. Prior to this time, many early settlers had driven cattle over the “Great Western” trail from Texas going north, through the present town site of Elk City, to Dodge City, Kansas.

Probably the most important day in Elk City’s history is March 20, 1901, the date the first 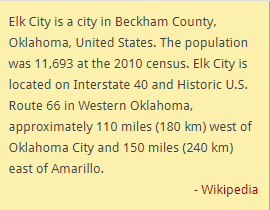 lots were sold by the Choctaw Townsite and Improvement Co., which had a few days earlier purchased the site for the business district from Mr. Allee.

By the date of the sale of the lots, March 20, hundreds of prospective purchasers had built a tent city. A legal document in the county clerk’s office certifies that the city was surveyed and platted into lots, blocks, streets, and alleys on March 18, 1901.

Originally called Crowe, the townspeople, eager for industry, renamed the town Busch, hoping to woo the favor of Adolphus Busch, so that the town might get a brewery. However, when the brewery did not materialize, the name Elk City was officially changed in 1901. Elk City was named after Elk Creek, which in turn had been named after an Indian Chief, Elk River, who lived in this vicinity years before.