With decades of R&D behind it, this company’s two-blade turbines have been carefully crafted for utility-scale community wind projects.

In many ways Nordic Windpower’s approach to harvesting the wind is highly academic in nature, backed by tens of millions invested over decades of research before the company began operations as a commercial entity. “And much of that R&D was conducted by university professors and scientists in Sweden, and funded by that government in the early stages, along with Swedish investors,” according to Tom Carbone, CEO, adding that many technical enhancements and contributions have been made by experts based in the United States and the United Kingdom since that time. “The company’s current owners—an impressive collection of wind power developers, wind technology experts, and clean-tech venture capitalists—eventually decided the time was right to bring this line of turbines to the U.S. market, officially launching the company in 2007.”

Just as Nordic Windpower’s history is somewhat nontraditional, so are its products. While the majority of wind turbines sport three blades, and some four, the company’s units are of the two-blade design, which has led to a number of features making them ideal for utility scale community wind applications. Taking its premier model, the N1000 1MW turbine, as an example, you’ll find an affordable, lightweight unit that can be raised atop a 70 m tower made in two sections—as opposed to the three- and four-section towers that most three-blade turbines require. The turbine nacelle and blades can be lifted by crane in one piece, with the blades assembled on the ground, decreasing installation time and costs and increasing safety. Maintenance is slashed due to a simple, reliable design, which also results in greatly increased service life due to lower loading of critical parts such as the gearbox and drive shaft. One of its most impressive features, however, is a proprietary “damped teeter hub” that provides a tuned flexible connection between the rotor and the gearbox. This flexibility prevents the wear and tear resulting from wind shear, turbulence, and other fatiguing forces on the mechanical drive train so prevalent in rigidly mounted rotor hubs in three-blade designs. The resulting long service life is well documented.

“During our lengthy research phase, which began in 1975, two large, multi-MW, two-bladed wind turbines were erected at two different sites in Sweden,” says Carbone. “One was a 3MW, and the other a 2MW unit. They were both put into operation in 1982 and carefully monitored for six years, until 1988. Neither failed, and both delivered the energy they were designed to deliver, with high reliability and low maintenance for being prototype units.”

Even more impressive was a 3MW two-bladed wind turbine erected in the early eighties at a time when the rest of the industry was manufacturing 150-225 kW machines. “By the time it was dismantled in 2006 it had operated continuously for 26 years and held the world power production record for a single wind turbine,” Carbone says. “While that record is now being challenged by some of today’s larger turbines, it stood as proof of the validity of our basic design.”

Another benefit of its heritage is the fact that many European wind farms are sited closer to populated areas than they are in the United States, increasing community focus on size, appearance, and the noise generated by the turbine blades in particular. According to Carbone, while three-blade turbines of the same rotor diameter may produce less noise at full capacity, Nordic Windpower’s two-blade units have been tuned to comply with the noise-level requirements for utility scale community wind turbines. “While noise may not be an issue with offshore developments, it’s a critical factor in onshore installations,” he says. “Once again, our years of development and testing really paid off.”

That development is ongoing at the company’s operations and assembly facility in Pocatello, Idaho, with marketing, sales, and finance activities based in Berkeley, California, and engineering services in Bristol, England. All told, Carbone and his colleagues believe that Nordic Windpower’s technologies will continue to be met by an increasingly receptive audience throughout North America and around the world.

“If you design a wind turbine that makes the cost of energy competitive with that of fossil fuels, is easy to operate and more affordable, reliable, and acceptable to communities, then you have a winner,” he says. “And that’s exactly what we’ve done.” 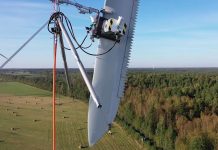