Recognized around the world for its research and testing, the Alternative Energy Institute (AEI) at West Texas A&M University is celebrating its 35th anniversary in education, training and development of renewable energy systems.

Formed in 1977, AEI based in Canyon, Texas, conducts turbine and sensor tests at its Nance Ranch Wind Test Center in partnerships with NRG Systems and the Small Wind Certification Council (SWCC). Beyond on-site testing, AEI performs work for private land owners, developers and the state of Texas in wind research.

“In the 70s, some of our physics professors were doing research on wind energy and renewables. It was about the same time of the 1973 oil embargo where prices went through the roof. The public became much more interested in renewable energy at that point and three professors, Vaughn Nelson, Earl Gilmore and Robert Barieau started the institute as an outgrowth of the research they were already doing,” said David Carr, associate director of AEI.

Carr now manages testing, resource assessment and other programs with a staff of full-time workers and undergraduate and graduate students from the institute’s main hub and 40-acre wind test center.

With initial funding from the State of Texas followed by grants and private contracts with communities and businesses, the institute now specializes in wind data collection and analysis, evaluation of wind turbines, research and development, workshops and training programs, consulting and educational programs and classes.

“We have datasets going back to the 80s for wind and solar in Texas, New Mexico and Oklahoma providing historical data in various areas for wind farm development,” he said. “We took data from various towers across those three states and that data is a big value for our partners in doing predictive assessments for long term wind analysis. We created the first detailed GIS maps for the state of Texas and provided that information to NREL so developers and others in the industry could look at the land and learn the potential for wind farm development.”

The institute also continues to be involved in GIS and WAsP data analysis for developers regionally as well as along the east coast and as far away as Kenya. Carr was involved in working with the group in Kenya as it installed its first site.

Carr says turbine testing is another major part of the work conducted by AEI. “We test turbines up to 50 kW and we test to AWEA standards,” he said. “We also do custom testing on our site for small-to-large-scale turbine models. Between 2009 and 2010, we installed 14 test pads that are ready to go at any time. Test pads are available with 480 volt three phase and 240 volt setups to accommodate many different types of turbines. Manufacturers ship their turbines to us. We can set it up, or their personnel can, and we test to the standards or custom requirements.”

The site is also capable of conducting small wind and custom prototype testing and enjoys Class 4+ winds, which Carr says generate faster results for users, and the construction and maintenance personnel on staff are knowledgeable and available at the site each day.

The AEI Wind Test Center is one of three preferred testing organizations from around the world recognized by the Small Wind Certification Council. Chosen from more than 20 testing centers, the SWCC designation indicates AEI provides quality engineering and testing practices.

West Texas A&M also offers two- and four-year degree programs in engineering technology with an emphasis in renewables, including solar, wind and biomass.

In addition to education, community outreach programs and manufacturing relationships, the center specializes in training and is an official training center for NRG Systems, where workers are trained on 50, 60 or 80 meter tilt-up towers.

“I don’t know if there is anything else like us in the industry all in one place.” Carr said. “We also offer international internships where students learn how to work, not only in wind, but also on our 48 kW solar system. Our entire test site is a net positive producer of energy. We use solar hot water to heat our workshop and solar hot air is pumped into the building for heating.

“We offer very specialized testing, training and data analysis for the wind industry, and we have the capabilities to serve many more developers and manufacturers,” Carr said. – S.M. 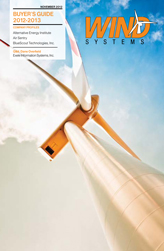 Thinking Outside the Gearbox