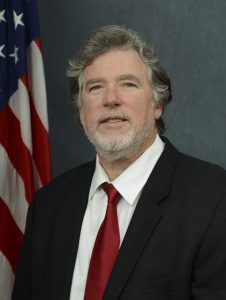 For those who don’t know, what is BOEM’s mission?

This is a very exciting time for the offshore wind industry in the U.S. We are getting to the point where the U.S. is about to have steel in federal waters for wind energy.

Does that not include Block Island?

BOEM has the authority to issue right-of-way grants that allow developers to build electricity transmission lines that connect renewable energy installations to the onshore electrical grid. While the majority of the activities and permanent structures related to the Block Island Wind Farm are sited in state waters and lands, making the U.S. Army Corps of Engineers the lead federal agency for analyzing the potential environmental effects of the project under the National Environmental Policy Act (NEPA), an 8-mile portion of the Block Island transmission system is located on the federally managed Outer Continental Shelf, which required the project to secure a right-of-way (ROW) grant from BOEM.

BOEM also provided some technical assistance on the development of the turbines themselves.

What do you do with BOEM?

Barminski: To complement that, in the Pacific, I’m the regional director here, and we handle all the energy programs, but for renewables we are implementing the program that’s been developed for BOEM specifically in the Pacific, which includes the three West Coast states as well as Hawaii.

What are the advantages of offshore wind in the U.S. versus onshore?

If you look at a map of the country overlaid with wind speeds, you will see that wind is concentrated in the middle of the country and offshore the East and West coasts.

Furthermore, these high wind speeds offshore are located near the major load centers of the nation. Whereas onshore wind has to move power longer distances to the load centers.

Finally, the open ocean allows for larger turbines than could be used onshore due to space restrictions. This results in even greater potential for power production.

The East Coast also has a very shallow shelf, which lends itself to the current available technology for wind energy such as bottom-founded structures, monopiles and jackets.

Barminski: Offshore wind has several benefits compared to onshore. In particular, there may be some limitations in terms of onshore locations. That’s particularly true in Hawaii where there’s interest in offshore wind because of land use already and also accessibility for the resources, as Jim pointed out. There’s a very good wind resource in the vicinity of Oahu.

But in California, too, the state’s very interested in looking at offshore wind, although there has been quite a bit of development of onshore wind resources in the state. Both California and Hawaii have very aggressive renewable energy goals. And meeting those requires them to look at some of the true potential for additional renewable energy resources offshore.

Where does wind stand on the Atlantic Coast?

Bennett: On the Atlantic, we are very optimistic about both the near-term and long-term potential for offshore wind energy.

BOEM has held seven competitive lease sales, which have generated over $68 million in high bids for almost 1.4 million acres in federal waters.

After our last competitive lease sale last March for the Wind Energy Area offshore Kitty Hawk, North Carolina, BOEM now has offshore wind energy leases off every state from Massachusetts to North Carolina (Cape Cod to Cape Hatteras). We have awarded 13 leases with over 15 GW of capacity. This indicates to us that the industry is moving forward in a big way.

BOEM has also received unsolicited lease requests from two companies seeking to develop offshore wind energy in areas located offshore New York and Massachusetts. These are both very important areas and are examples of the importance of state leadership. Both states have established strong goals for the contribution of OSW to their respective states, and both are investing in studies to facilitate future projects.

Where does wind stand on the Pacific Coast?

Barminski: In both California and Hawaii, BOEM has determined that there is competitive interest in commercial leasing for offshore wind. In both states, we are working to conduct planning activities for those possible competitive leasing auctions. So, those are in our future. In California, BOEM and the state are working side-by-side to gather stakeholder input. We’re trying to identify and collect relevant data and information on existing ocean resources and uses. And that’s part of the planning effort.

And all of that information will help identify suitable sites for offshore wind development in the future and help facilitate the decision-making. There is a really good dataset available, which is being put together by the state of California. It’s specifically being collected in something called the California Wind Energy Gateway; there’s a link on our website. In Hawaii, we’re, again, working closely with the state and the Department of Defense, which has a large presence in the state of Hawaii, to identify potential areas for wind leasing offshore Oahu. And, of course, we’re looking for compatibility with military uses and the technical potential for the wind development.

What are the challenges and how do they differ from coast to coast?

Bennett: BOEM’s mandate to manage 1.7 billion acres on the OCS is no small task. On the Atlantic, we have a lot of diverse ocean users. Despite the vastness of the ocean, once you start identifying different activities, such as commercial fisheries, navigation, vessel traffic, and DOD interest, it becomes very difficult to identify areas that don’t have some kind of conflicting use. The OCS is home to multiple users, and BOEM is committed to reducing multiple use conflicts.

Another way BOEM works with its diverse stakeholders is through intergovernmental task forces. These task forces bring together members of state, local, and tribal governments and federal agencies to discuss stakeholder issues, exchange data and information, and identify potential conflicts early in the planning and leasing process.

Barminski: On the Pacific, the main difference is on the technological side in terms of the water depth. In the Pacific, along the West Coast and in Hawaii, there is very little shallow water, and what there is of that is too close to shore and is within the state waters area.

And so in looking at the OCS, there’s a rapid drop-off in water depth, which precludes the use of the bottom-founded structures. We’re looking at floating wind as being the prevalent technology to be utilized in these areas on the West Coast and Hawaii. That’s really the main difference. Floating technologies are being deployed in Europe, and those are informing the decision making for the Pacific. But the proposals we’re seeing are all in the floating realm.

I think there are really a lot of similarities to the Atlantic in terms of the ocean users considerations, the DOD constraints, and the equities they have in the operational arenas.

There’s one other thing I can mention that’s different for the Pacific. The renewable energy authority granted to BOEM allows us to lease on the OCS; however, that same authority precludes us from leasing in national marine sanctuaries.

And along the coast of California, there are several large sanctuaries, which comprise areas where we cannot offer leases.

What is BOEM’s involvement in the development of an offshore wind farm?

Bennett: In 2009, Department of the Interior (DOI) announced the final regulations for the Outer Continental Shelf (OCS) Renewable Energy Program, which was authorized by the Energy Policy Act of 2005 (EPAct).

These regulations provide a framework for issuing leases, easements, and rights-of-way for OCS activities that support production and transmission of energy from sources other than oil and natural gas.

How does wind off the coasts of the U.S. differ from established offshore wind in Europe?

Bennett: We have been working closely with our counterparts in European governments (e.g., Denmark and the U.K.) to benefit from their 20-plus years of experience in offshore wind and seeking to understand how we can best apply that experience to our program.

With Denmark, we signed a Memorandum of Understanding in 2016, which provides a mechanism for bilateral cooperation on areas of mutual interest. We have held information exchanges on a number of topics, with the goal being to share lessons learned and best practices in key program areas.

For instance, BOEM recognizes that the details of a lessee’s project may not be finalized at the time a construction and operation plan is submitted. In Europe, use of a design envelope, commonly referred to as a “Rochdale Envelope,” is an alternative method for considering offshore wind facilities. A project’s design envelope, which is based on conceptual design information and initial survey work, includes engineering options from which the final design will be refined later. Developers have expressed interest in using a similar approach for offshore wind facilities in the U.S.

The use of a design envelope would allow for the evolution of a project and technology in the years between application submission and deployment. Considering a range of build-out options, including different phasing scenarios, could reduce or eliminate additional environmental analysis for revisions to approved COPs, creating efficiencies, and reducing the possibility of delays.

Could the phase out of the PTC affect offshore wind development?

Bennett: There have been some exciting things happening on the state level. For example, in New York, Gov. Andrew Cuomo committed the state to acquiring power from 2.4 GW of offshore wind by 2030 in his State of the State Address in January. New York is also working closely with BOEM to identify additional areas off of New York that might be appropriate for additional wind farm development.

Another example is up in Massachusetts where Gov. Charlie Baker signed a new energy law that requires utilities to procure a combined 1.6 GW of electricity from offshore wind.

There’s a similar situation in Maryland where the state, through its Public Service Commission, has awarded offshore wind renewable energy credits to two companies totaling 368 MW of capacity. The ORECs were awarded to US Wind and Skipjack Offshore Energy, LLC.

Where do you see offshore wind on either coast in the next 10 years?

Barminski: On the Pacific, it’s difficult to definitively outline where we’ll see offshore wind in the next 10 years, but it’s clear that both states and industry are very interested in exploring the opportunities for offshore floating wind. And we have a lot of factors that are guiding our efforts, including demand growth, the state renewable energy goals, which are significant, and then our leasing process and industry readiness.

Cost competitiveness is another driving factor. Based on those factors, we could expect to see initial projects in the 2025 timeframe, at the very least more progress on the planning and then the offshore leasing. But it really does depend on some success with initial deployment and continuation of the cost reductions that have been experienced.

The technologies are definitely being tested in the European arena offshore Portugal and Scotland, where full-scale floating wind technology is being deployed. It’s pretty exciting to see that happening over the last five years.

Bennett: On the East Coast, we’re very enthusiastic. The last two renewable energy lease sales BOEM conducted exceeded our expectations and demonstrated the level of interest from industry. Our progress thus far has been the culmination of 10 years of hard work, and I think within five years we’re going to see actual steel in the water for the first time on the federal outer continental shelf.

I don’t want to be overly optimistic, but I am optimistic that we’ve turned a corner and that the offshore renewable energy industry is going to be coming online in the next few years.