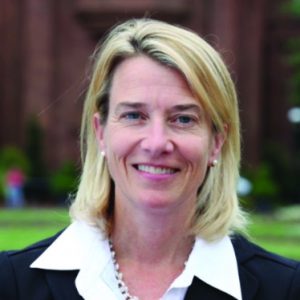 What is your role with AWEA, and how did your background help you prepare for it?

I lead the American Wind Energy Association’s offshore wind policy and regulatory portfolio. That means a lot of time spent advocating before federal agencies regarding policies, regulations, and general approaches for offshore wind. I also work on the Hill in coordination with AWEA’s Federal Affairs team. All of my work is guided by the priorities of AWEA’s business membership — offshore wind developers and lease holders, the supply chain, and turbine manufacturers. The offshore wind supply chain includes a very diverse group of companies that, for instance, build foundations, construction and service vessels, and much more. We balance a broad range of priorities and perspectives, but at the end of the day we’re all rowing together toward our goal to build a U.S. offshore wind industry at scale.

Personally, it’s immensely gratifying to be back working on offshore wind issues at this critical moment for the industry. I just began work for AWEA earlier this summer, but in total I’ve worked on offshore wind issues for more than 10 years. That includes time spent as a regulatory attorney and in senior roles at the Department of Energy, Council on Environmental Quality, and the National Oceanic and Atmospheric Administration. I also led DOE’s collaboration with the Department of the Interior to produce the original National Offshore Wind Strategy, which charted a course to build the U.S. offshore wind industry. Having led interagency teams charged with creating efficiencies in the permitting process for clean-energy projects, I know how important it is for the future of offshore wind investments to make sure the regulatory process works for our members AND other ocean users.

Why is offshore wind important to the U.S.? Doesn’t the country still have plenty of untapped land for onshore farms?

There’s no doubt that land-based wind will continue to grow and play a large role in many parts of the country. But as you know, nearly 80 percent of U.S. electricity demand is in coastal states. Offshore wind is close to those population centers and has the technical potential of producing more than 2,000 GW of wind.

We also have huge amount of momentum now with offshore wind. Companies have invested more than $470 million just for the opportunity to develop projects and are investing millions in local economies, ports, coastal infrastructure, and the workforce.

We also have the potential to grow tens of thousands of U.S. jobs as we build these projects. In fact, a recent study estimates that the first 8 GW are expected to create 36,000 jobs within the next 10 years. There are 74 different occupations required to build a wind farm – from electricians and welders to iron workers, pile drivers, engineers, vessel operators, and scientists.

The U.S. also has a lot of businesses with expertise in offshore infrastructure, including oil and gas supply chain businesses, that are looking for opportunities in offshore wind. We’ve already seen this with the Block Island project. The foundations for the project were built by U.S. craftsmen trained in oil and gas fabrication and a Louisiana liftboat operator used its experienced crews and vessels as feeder vessels for the project.

You recently toured the Block Island facility. What did you take away from that visit?

It was great to see America’s first offshore wind farm in person. Seeing the turbines spinning and delivering clean electricity to consumers shows that offshore wind power is real and possible for the U.S. A 6-MW offshore wind turbine like the ones at Block Island can power approximately 2,300 homes, and manufacturers are working on even more powerful models above 10 MW.

We also saw the U.S. jobs that can be created from wind-farm operations. As we passed by the turbines, we saw a worker suspended from a turbine blade performing a regular maintenance inspection and a specialized offshore wind support vessel designed to safely transfer crew on and off the wind turbines. The vessel is owned and operated by Rhode Island-based Atlantic Wind Transfers, the first U.S. offshore wind-farm support company,
Tourism is also up for Block Island. As we returned to the terminal, folks were waiting in line to take the ferry. Overall, the project stands as proof that U.S. offshore wind farms can and will be successful.

East Coast wind is obviously a priority right now, but is there anything being done to get steel in the water on the West Coast?

You bet. BOEM has already put out call areas in California. They’ve announced in their path forward that they anticipate finalizing those by the end of the year and that they’re planning to hold an auction next year in 2020. There are more than a dozen developers that have expressed their interest in development to BOEM. Investments are also being made to develop innovative floating wind technology given the depth of the waters off the West Coast.

Can you explain what the recent news about Vineyard Wind* means for the future of offshore wind in the U.S.?

There’s no doubt that that we are concerned about the delay, particularly because it was inconsistent to the Administration’s commitment to regulatory certainty and efficient processing of these large energy infrastructure projects.

The industry is committed to working with other ocean users to develop our projects safely and responsibly and understands the need to perform thoughtful impact assessments.

That being said, all capital-intensive energy industries need regulatory stability and certainly. A nascent industry like offshore wind needs a predictable pathway to ensure that investments are made here in the U.S. to realize the potential for a stronger maritime economy.

Supply chain businesses are certainly watching the regulatory process closely as they prepare to make decisions about new factories, port infrastructure, installation and service vessels and other capital investments.

We are confident that BOEM is going to complete its supplemental review by the end of this year or early next and will continue processing other projects and lease sales in the pipeline. The potential for offshore wind job creation and infrastructure investment can’t be ignored.

What can the U.S. learn from established offshore wind farms in Europe?

The answer— just to put it briefly — is a lot. There are decades of experience developing these projects and over 18 GW installed. While there is no doubt that this is a new industry in the U.S., and that there certainly are some differences, the U.S. can learn from the long-standing European experience on a number of areas including vessel navigation and safety, distances between turbines, potential environmental impacts to wildlife, compatibility with commercial fishing and other ocean uses, and O&M practices.

We’ll certainly see the first phase of large-scale offshore wind deployment in the Northeast and mid-Atlantic. We have developers planning to put steel in the water between 2020 and 2024. That’s obviously quite near-term. Recent industry forecasts estimate that between 11 and 16 GW could be in development and come online before 2030.

And again, we can’t forget that that a recent report has projected offshore wind could spur over $70 billion in new capital investment, as well as tens of thousands of American jobs by 2030.

Bottom line, this industry will achieve scale in the U.S.; Federal leases have been issued, and hundreds of millions paid to the U.S. Treasury. We have high state procurements, significant investments being made in ports, coastal infrastructure, and communities, developing supply chains, and a growing workforce.