I don’t want to waste my time, labor, or money doing unnecessary things.
This year I have spent much of my time here talking about data collection on wind turbines in a variety of forms. This is because I want to know when I should do something—when I should react. I am looking for a trigger point to intelligently move into action.

Let’s face it, wind turbines will eventually have problems. So far, every machine I have ever worked on has needed grease, and has broken down. When it comes to maintenance, I figure that you have two options. The first option is to collect data and determine where you should be spending your time, labor, and money. The alternative—your second option—is to just guess or wait until the machine breaks down, and then react to fix it.

The problem with waiting and reacting is that you may never catch up. You will always feel like you are in the dark and be frustrated by the loss of control of the consumption rate of your resources. Besides slowly falling behind, surprise failures affect the entire team’s morale, demolish budgets due to high repair costs,  and cause revenue losses due to the turbine being off line. The best you can hope for is an insurance claim, such as when a turbine totals itself out (e.g. a failure due to fire).

Even when you have data from multiple sources, the machines are still subject to failure. The difference is there are fewer surprises when you can see the failure coming at you. Sometimes data collection allows you to catch and solve the problem in one machine, and make proactive repairs to other turbines before the the same failure affects  all the machines in the fleet.

Sometimes, it makes sense to just let the machine fail. But there is a difference in knowingly letting it fail and having a failure occur without warning. Armed with data, the failure doesn’t catch you by surprise.  The team knows what is going to happen and can plan for it accordingly.

Many of the articles written here this year concerned with different ways of collecting data so as to get a feel as to what is going on for each turbine’s critical components. Each one of these data collection methods is a way to get data to trigger an action. The action part is key. Data collection by itself is not the goal. This data needs to be formatted so that it is able to be reviewed by someone. This should be done immediately in order to maximize the benefits. As such, it makes sense to incorporate incentives for employees who review the data. They should constantly be asking “Where is the new data for us to review?”

I’m sure many feel that they are overloaded with data, but this data is very important, and for some types of failures, time is money. The quicker you are able to react to what the data is telling you can often mean the avoiding significant unplanned added costs.

Even those who are not familiar with the intricacies of the different machinery components can notice trends, and will be able to tell when things are out of the norm. They may not know what is going on, but they can see that something is different and can ask for help from someone who is more experienced.

Sometimes I hear or see that maintenance data is not being reviewed on a timely basis. Ignoring that constant stream of data may seem trivial most of the time. It may seem like you are reducing your workload. Maybe you are. But in reality it just means that, in the event of a failure, you may realize that the data you ignored was telling you a story. The failure may even have been avoidable. Instead, it caught you by surprise and cost your team.

Oil sampling, for example, is a common data collection method that requires analysis. If not followed through properly, there are many areas in which data from oil sampling can fail to be functional.
The first area of failure is taking the oil sample improperly. There are many ways to mess this up, and all have their failure modes. Taking the oil sample at the wrong location or at the wrong time (such as during a period of long-term machinery standstill) introduces the risk of the sample becoming contaminated.

Another failure in prompt data collection occurs when the retrieved oil samples are allowed to bounce around a few days in a truck, or to sit on the counter or desk for weeks before finally sending them in for analysis.

The next failure point in the oil sample cycle occurs when emails containing oil sample data are ignored by the recipient.

Do any of these problems seem familiar? If so, it is time to step up and improve your data collection review.

That’s just one example of how data can be used to trigger a service or action. 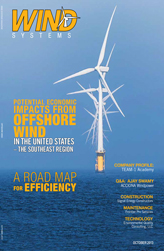 The Case for a Jones Act WTIV