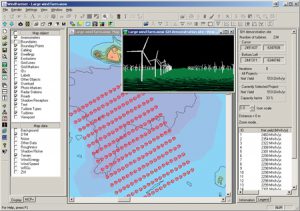 To further boost the productivity of the wind farm design process, GL Garrad Hassan presented an updated version of its WindFarmer software at AWEA Windpower 2011. The software facilitates the layout of wind farms to maximize the power produced while minimizing the environmental impact. The new release of the software offers project planners and developers an even more powerful tool for wind farm design and energy yield calculations.

Professionals around the world work with WindFarmer to design both onshore and offshore wind farms of all sizes. This software tool integrates wind farm energy and environmental assessments with wind farm layout design and data handling. It is acknowledged not only for its user-friendly interface and the speed and accuracy of its calculations, but also for the transparency of its data models. For more information visit www.gl-garradhassan.com/windfarmer.