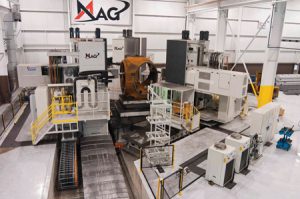 Astraeus Wind Energy’s MAG MEGAFLEX machining system has passed its initial supplier qualification by completing “Operation 20” metal cutting processes in record time on a Clipper Windpower C96 turbine hub, one of the industry’s largest. The unique system simultaneously machines all three blade faces, which enabled it to complete the qualification hub in less than one shift, a first in the industry. “Completing hundreds of features on this hub in such a short time, and meeting the extreme tolerances required, is a world first for U.S. manufacturing technology,” according to Astraeus President Jeff Metts. “We should be able to do the industry’s simpler hubs in even less time. This is, without a doubt, world-leading technology that no one else can compete with. The system is operational now and we are taking orders, forecasting a capacity of about 1800 hubs per year.”

Conceived by MAG in 2009, the MEGAFLEX system’s development was funded in part with grants from the Michigan Economic Development Corporation (MEDC), which audited and approved the progress of Astraeus in meeting its performance requirements. MAG developed the entire system on a turnkey basis, including the process concept, programming, machine systems, and tooling package. The patent-pending MEGAFLEX design, which is based on three MAG FTR 5000 floor-type boring mills surrounding a B-axis rotary table, simultaneously machines all three blade faces on a wind turbine hub in one setup, a concept widely used in mass-production of automotive components and small parts. “This is automotive machining technology scaled up an order of magnitude,” says Pete Beyer, MAG director of product development. “We are using multiple spindles, specialized tools, and clever process technology to finish a part in one setup in the shortest time possible while maintaining the flexibility to process a family of different hubs.”

Concepts borrowed from the automotive industry include offline setup and quick part loading, using a fixture interface plate and a lifting bracket for the workpiece. The interface plate is bolted offline to a locating feature on one side of the casting; the plate then mates with a locating feature on the worktable for fast part setup. The lifting bracket attaches to the top of the part to allow a single crane to transfer the part in and out of the workzone safely and quickly. “These are classic part handling techniques on a gantry-type automotive line that we have adapted for very large parts,” Beyer says. “We can setup the next part offline on an interface plate, and quickly exchange a completed part to maximize utilization of the spindles.”

As part of the MEGAFLEX design, each machine has a latch-plate interface to accept attachments from a head changing rack. However, for cost economy, the system currently has only one attachment rack, which can be moved for use by any of the machines. Rotation of the worktable allows the machine using the attachments to access all three faces of the part. Synchronous/asynchronous processing is then used to balance out the cutting times and cutting forces of the three spindles when doing similar and dissimilar operations. For more information go to www.mag-ias.com.