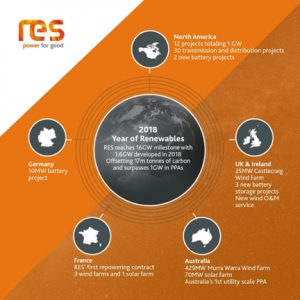 RES’ North American operations delivered 1 GW of renewable projects in 2018, helping the company reach a 16 GW global milestone in what it describes as the “Year of Renewables.”

A total of 12 wind, solar, and energy-storage projects and 30 transmission and distribution projects were developed and/or constructed across North America. During peak construction periods, these projects created more than 2,000 jobs. Among the 2018 milestones were the development and start of construction on a combined solar/energy storage project in Texas, and the sale of three projects: the 200-MW Reading Wind project, the 50-MW Lamesa II solar project, and the 100 MW Wildhorse Mountain Wind project.
“For us, 2018 was the ‘Year of Renewables’ and one in which Power Purchase Agreements came of age, the clearest indication yet that renewable energy has become as competitive as other forms of energy,” said Ivor Catto, chief executive officer at RES. “We have now developed and built over 16 GW of wind, solar, and storage assets across the world after growing our portfolio by 1.6 GW in the last year. Collectively, we now offset enough carbon, which is equivalent to 531,250 trucks of coal – if you lined them up end-to-end, they would stretch from Albuquerque to London.”

Globally, 2018 proved to be the year of the PPA, with November’s agreement with Royal Caribbean Cruises Ltd. helping the company surpass more than 1 GW of contracts with corporate customers. RES has previously signed agreements with Microsoft, Google, General Mills, Telstra, HSBC, and General Motors. RES also continued to serve utility customers in 2018, signing PPAs for the Crossett Solar project with Arkansas Electric and Delta’s Edge Solar project with Cooperative Energy in the United States.
In a year of milestones, RES also:

“We have made great progress in 2018, and this provides us with a solid foundation to continue to build toward a future where everyone has access to affordable zero carbon energy, which is the vision of the company,” Catto said.