When it comes to getting a wind project off the ground, a lot of planning and research takes place years before the wind actually starts to spin a turbine to produce electricity.

Planning and research is where the experts at Debenham Energy LLC come in.

Debenham Energy serves as a consultant on a wide variety of technologies, locations, and customer types and develops projects for its own account.

The consulting and development services provided by Debenham Energy include site evaluation, equipment selection, and recommendations on alternatives for procurement, financing, installation, operations and maintenance, and ownership.

“We’ve identified the best sites where no one else has, but where everyone else should be looking,” said company President Scott Debenham. “We are working with a tribe and joint development partners that see the vast opportunity in renewable energy sites untapped only because of a negligent federal bureaucracy and its burdensome regulations.”

For example, Debenham was involved with the Bureau of Land Management (BLM) before the wind and solar development policies were signed in 2005 starting the land rush. While with BrightSource Energy, he prepared the Standard Form 299 (SF-299) Application to BLM Needles and started discussions that led to the world’s largest solar thermal project (400 MW) at Stateline on Interstate 15. The same SF-299 form is used by the U.S. Forest Service, but that is where the similarities stop.

The company collaborates with federal and tribal governments, which is critical for evaluating each site and energy potential, and establishing the most profitable deal structure, be it for wind or solar resources, or storage, or an optimum combination of available fuels and technologies.

“The homerun for us is applying our knowledge and tribal knowledge to understand energy sites, and then partner with three or four developers to persuade and compel the U.S. Forest Service to use a rational renewable policy and implement it consistently in a decentralized organization while the U.S. Forest Service espouses support for renewables in their D.C. office, but the field offices are not in lockstep, an easily solvable problem,” Debenham said.

The past and current administration issued presidential and secretarial orders that mandated renewable energy development. Yet, since these policies and orders were issued beginning in 2011, the total MWs of renewable energy produced on Forest Service lands is exactly zero, according to Debenham. The Forest supervisors and district rangers in the field have the final say about energy development on Forest Service lands.

“They use permitting regulations to deflect, delay, and defeat developers who seek to release the untapped energy potential on these federal lands,” Debenham said. 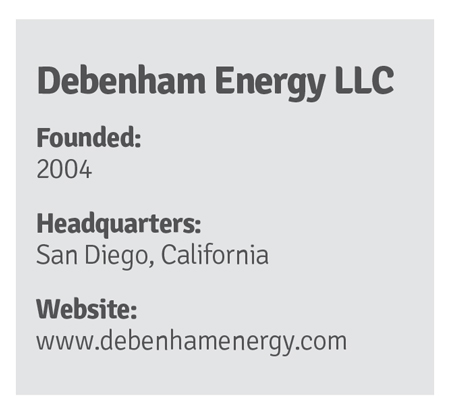 Federal lands often border tribal lands, so the great energy potential on tribal lands is constrained by the Forest Service aversion to energy development, treating it as a disfavored use. This is a political problem that can be resolved if the Administration and Congress hold the U.S. Forest Service responsible for the interests in developing all available energy from all available sources, according to Debenham. Today, the predominant risk in any effort to develop the vast energy potential on federal and tribal lands is overcoming the unresponsive federal bureaucracy. The threat of specious lawsuits called “greenmailing” by conflicted environmental groups is also at the top of the list, according to Debenham.

Debenham described the scenario this way: Forest Service lands are not financeable for energy projects by developers and banks because permitting is weaponized to defeat all applications. The value of this lost opportunity is in the 33 GW of wind and solar energy potential in California. California’s average load is about 30 GW. Anyone can understand the combination of wind, solar, and storage in this amount can help California with its renewable goals and in the management of its grid during high demand periods and during emergencies — wildfire events, for example. Arizona solar and wind potential is more than 200 GW.

Debenham has identified five specific recommendations to remove “burdensome regulations” and allow infrastructure projects to proceed, which he explained in his OpEd that can be found here.

Debenham recognizes tremendous potential for wind and other renewable energy projects on Native American tribal land, and he works closely with tribal governments that desire to gain value from their wind and solar resources. Wind and solar projects of greatest value demand large scale to achieve the economies necessary in today’s low-cost energy markets. Many tribes can benefit from the energy resource, as they have the land to site such projects. However, their development goals have been thwarted by both the Bureau of Indian Affairs and federal land managers, such as the Forest Service. These Forest Service lands stand between the tribes and transmission facilities and off-takers (customers). According to Debenham, the unwillingness of the Forest Service to fairly consider tribal and non-tribal energy projects alike is evidenced by 20 rejection letters from the Forest Service received over the last eight years in four states.

Developers on tribal lands and non-tribal lands are also hampered by the U.S. Fish and Wildlife Service oversight of various environmental and wildlife regulations that add millions of dollars to projects. In their overzealous overreach, according to Debenham, the Fish and Wildlife Service rejects science and traditional tribal knowledge that do not agree with their predetermined outcomes, and seeks mitigation measures, such as idling of wind turbines for extended periods, that can make any profitable energy project uncertain of revenue if not uneconomical. The federal regimes are a particular deterrent to financing, and these costs are ultimately paid for by ratepayers.

Debenham likened high-energy costs to a regressive tax in that the burden falls disproportionately on the poor as a percentage of income.

That leads into an issue that Debenham has been attempting to solve with the U.S. Forest Service for 11 years.

Several wind projects proposed by Debenham Energy have been rejected by the Forest Service, but Debenham said he hopes the new Administration in Washington will listen to tribal governments and to energy developers whose message is to roll back burdensome regulations and federal overreach. This applies to renewable energy, carbon-based, and storage projects. Six reasons for rejection of one of Debenham’s six Nevada applications can be found here.

Debenham asserts the Forest Service is disregarding the benefits of renewable energy and storage projects to wildland fire suppression. Firefighting concerns for firefighter safety is paramount, and safety increases with the sharing of wind resource data with firefighting agencies. Maintenance roads and transmission facilities introduce firebreaks that could help stop wildland fires before they become firestorms.

Debenham said wind and storage benefits are ignored in the USFS screening process but not in carbon-based projects. Additionally, the flexibility added to the grid by storage-coupled renewable energy can keep the grid functioning during wildland fire events. At this scale, given the U.S. Forest Service is 25 percent of the western U.S., there exists an opportunity to stabilize the grid akin to Eisenhower’s interstate highway. Discussions are starting with CAISO and NERC for a preliminary evaluation of the critical locations for energy storage.

The Forest Service’s willingness to allow these wind projects to ‘pass screening’ is especially critical on the projects desired by tribal governments on tribal lands, according to Debenham. Passing screening in USFS parlance is simply allowing the project to be studied (NEPA).

The Ewiiaapaayp Indian reservation is off-grid and has one 12-mile dirt access road, Debenham said. Not only will the Forest Service not approve a road easement permit for a half mile access road to the reservation, they won’t approve an initial permit to evaluate the wind resource potential on contiguous National Forest lands, which were formerly the tribe’s lands. Ewiiaapaayp has thousands of years of traditional knowledge about the wind and about species at risk such as the golden eagle, as well as 25 years in developing a wind project on its lands, so Debenham Energy and the tribe are sharing their expertise.

Tribal lands and Forest Service lands in east San Diego County could yield 250 MW of wind and provide energy storage at two key circuits that will materially help replacing carbon-based energy, complying with San Diego’s unanimously approved Climate Action Plan (CAP) mandating 100 percent renewable. Additionally, it will provide energy security as the generation is in the region, a critical factor if the state is serious about energy security as it relates to fires and terrorist attack, Debenham said.

“I’ve been working on this project for 10 years,” he said. “The tribe has been working on it for 25 years. And it has some of the best wind in all of California. The BLM has rational policies that provide transparency and allow for appeals, which is why they permitted the 150 MW Tule Wind Energy Project on BLM lands, and the tribe permitted 51 MW of the project on the Ewiiaapaayp Indian Reservation. We know this area better than anyone. We just need to shine the light on Forest Service problems and gain congressional support for long overdue and critical changes.”

Working with the local tribes, commercial and industrial customers, and other developers is part of the consulting process that Debenham Energy has implemented to help push wind, other renewables, and increasing storage forward since the company began in 2004.

Debenham Energy has a growing list of 35 clients looking for ways to take advantage of renewable energy and storage.

His 30 years of experience includes the development of a federal (ESPC) performance contract for the federal prison in Victorville, California. It was a self-financed project that included a 750 kW wind turbine, a 70 kW covered parking array, and an energy efficiency retrofit of the HVAC and controls systems.

Looking toward the future, Debenham expects his company’s role in renewables to only get bigger with the market’s growth.

“There’s going to be a point of grid parity,” Debenham said. “Solar costs will keep dropping while efficiency improves. Solar costs dropped 70 percent in five years, and nobody predicted that. And wind installed and maintenance costs continue to drop while efficiencies increase and lower wind speed designs continue to enter the market. I’d like to continue on with wind development coupled with solar and storage and solve the USFS conundrum, which is fixable in short order with luck and hard work.”

But as Debenham Energy reaches out across the globe, it still plans to keep a hand firmly in California and continue to work with as many companies as it can to bring potential projects to fruition, according to Debenham.

“We believe the good people of the Forest Service will eventually follow their own policies,” she said.