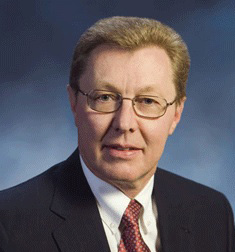 Could you describe the NPPD’s origins and structure?

NPPD is a governmental entity, established in 1970 out of a merger among several other public-power organizations, and it is governed by a publicly-elected board of directors representing 11 districts across the state. Our directors serve six-year terms and set direction and policy for NPPD. Primarily a wholesale power supplier, NPPD has about 3,200 megawatts of generation assets consisting of nuclear, coal, hydro, natural gas, oil, and wind resources. NPPD also operates more than 4,000 miles of high-voltage transmission lines, covering a large share of the state. Our wholesale customers account for approximately three fourths of our total revenues, with the remainder of our revenues coming from energy sold directly to retail customers. Our charter service territory is 91 out of 93 counties, so our retail customers are located throughout the state, in communities outside of Lincoln and Omaha.

When did you decide to pursue wind as a power source?

The board of directors approved our first wind project in 1998 in order to learn more about wind generation and how to integrate it into our system on a small scale. It consisted of two 750-kilowatt turbines located in north-central Nebraska. Our next project, in 2005, was the Ainsworth Wind Energy Facility, which we own and operate. It generates approximately 60MW of electricity with 36 turbines. NPPD retains about 32 megawatts and sells the remaining 28 megawatts to other public-power entities around the state and country. While the large wind farm performed well the first year, we have learned many lessons while operating this facility, and there were some problems to overcome in subsequent years. Nebraska’s environment brings rain, snow, sleet, ice, and dramatically changing wind conditions, not to mention temperatures as high as 110 degrees down to 25 below, so we had some problems with blades cracking, gearboxes, and other maintenance issues. NPPD has since decided to take a different approach to incorporating wind into our generation assets.

What does this new approach involve?

Rather than continuing to develop wind farms as the owner/operator, we’ve begun working with private developers who construct, own, and operate them in areas we have approved. The sites we’ve identified meet two primary criteria; that they have a steady wind supply and are located near existing high-voltage power lines. In this arrangement, NPPD doesn’t have to provide financing to construct the farms, and we don’t have operational responsibilities. In addition, the private developers are able to take advantage of federal incentives that NPPD isn’t eligible for. We purchase the output from them at a fixed rate, so we know exactly what we will be paying for the duration of the contract. Our process begins with issuing a request for proposal, or RFP. In 2008, NPPD signed a power purchase agreement for 80MW from the first of these projects, the Elkhorn Ridge Wind Facility, which came online earlier this year. We see this as a great relationship because we didn’t have to raise capital, and the owner/operator is responsible for all maintenance and upkeep.

What is your prognosis for the future of wind energy in your power portfolio?

Wind will provide an increasingly larger share of NPPD’s energy in the future. Even though less than 2 percent of our energy requirements are currently derived from wind, our board of directors recently established a goal of 10 percent by the year 2020, which I am confident we’ll be able to meet. Nebraska reportedly has the sixth-best wind potential in America, so there is opportunity here, especially for wind industry equipment manufacturers. The state is central to areas where wind generation has the most potential. Nebraska has an excellent workforce, some of the lowest electricity rates in the country, and state incentives for both developers and manufacturers who are thinking of locating here. I can assure you that there is a great deal of opportunity for wind industry manufacturers here in Nebraska.