Normally, when asking people at trade shows if they know of fiber optic cables, I see hesitance accompanied by some shoulder shrugging, and eyes wandering, frantically trying to find the answers from my booth’s advertising banners.  When people think of fiber optics, they often associate it with the telecommunication industry, the Internet, or telephone cables.  What most people don’t know is that optical fiber’s wide range of applications extends to industrial networking, including controls systems for solar and wind power.  Industrialized fiber optics provide an effective means to transmit data in the harsh environments.  How can the wind industry benefit from using fiber optics technology?  Well, if we look back at history we can see how far fiber optics can take us.

Windmills, first developed in China and Persia, have been in use since 2000 B.C.   Used extensively in the Middle East for food production by the 11th century, they influenced merchants and crusaders to carry the idea back to Europe, primarily to the Netherlands.

The Dutch adapted a new method of the windmill and used it to drain lakes and marshes in the Rhine River Delta. In the late 19th century, this technology was brought to the New World by settlers who then pumped water to farms and ranches and later generated electricity for homes and industry.  In Europe and later in America, industrialization led a steady decline in the use of windmills. However, it also sparked the development of larger windmills in order to generate electricity. These windmills became known as wind turbines, which appeared in Denmark as early as 1890.

Early in the twentieth century, advanced scientific research and discovery led to an onslaught of development, production, and manufacturing, creating an enormous demand for electricity.  Seemingly in the blink of an eye, coal mining and crude oil production grew quickly to supply the natural resources necessary for electricity generation.  With an insatiable demand for industrial and consumer electricity, the nuclear age rose as an added source for the energy needs of the world.  In June of 1954, the first nuclear power plant began operation at Obninsk, Soviet Union.  With this event, the world of energy changed forever: generation of billions of megawatts brought power and light to the farthest reaches of economically advanced continents, and incredible cities’ infrastructures emerged around these powerful electrical stations.  Centralized power generation, once a rarity, has become ubiquitous, often taken for granted as we switch on lights, charge smartphones, and enjoy the comfort of environmentally conditioned buildings. Figure 1

This energy boom, unfortunately, also introduces hazards for the population.  All too often, we witness scaled tragedies in far-away places as evidenced by refinery explosions, oil spills, and rare but far-reaching nuclear accidents.  Names like Chernobyl, Fukushima, and Macondo are etched into our collective memories as useful reminders that all forms of energy generation have inherent risk.

Seeking clean and environmentally friendly ways to produce electricity, many turn their attention to modernized wind power and other renewable energy sources.  “Wind energy became the number one source of new U.S. electricity-generating capacity for the first time in 2012, providing 42% of all new generating capacity.” In 2011, German chancellor Angela Merkel proposed a plan to replace all of German nuclear power plants by 2022 and triple the renewables share by 2050.  While these goals are ambitious, the larger picture presents a new era of innovation in alternative approaches to the energy generation.  Figure 2

Why fiber optic technology in the wind power industry?  The simple answer is that the combination of safety, efficiency, cost effectiveness, and reliable performance in harsh conditions makes fiber very attractive for use in these applications.  Fiber optic cable gear is commonly used in Supervisory Control and Data Acquisition (SCADA) systems within and between wind towers.  All dielectric fiber optic cables offer the added advantage of reducing ground potential to help protect critically important controls equipment in the event of lightning strikes.  Complex wind farms are commonly operated through fiber optic cables and switches to connect various servers to the turbines for monitoring and control of wind power plants.  Daily, millions of meters of these cables provide seamless wind farm communications and data integration from the wind towers through centralized control networks.

Known for its ability to transmit vast amounts of data over great distances, optical fiber products also offer these distinct advantages in the harsh environments of wind turbines and wind farms:

Naturally, power generation, transmission, and distribution create strong electrical noise.  Because using optical fiber inside wind turbines offers immunity to radiofrequency interference (RFI) in addition to electromagnetic Interference (EMI), data transmission is not affected by electrical noise.
If optical fiber cable is the best choice, what prevents some manufacturers from using more of it in wind power applications?  Is field termination too difficult? Are technicians too hesitant to work with the fiber?

These questions present serious obstacles in choosing optical fiber; the reality is that some cable technicians are hesitant to work with glass fiber.  Some of the common misconceptions about optical fiber include that it is, “Too complicated, too fragile, too tiny to terminate, messy epoxies are used, tedious polishing processes are needed,” and my personal favorite, “you need special training and certification to work with it.”

Historically, a common fear of the handling and long-term reliability of using glass optical fiber in such environments has hampered its adoption in wind power applications.  Through decades of development, companies like OFS have developed and proven the robustness and simplicity of using optical fibers in applications from subsea, to aerospace, medicine, factory automation, and oil and gas markets.  Recently, significant inroads have been made to both improve fiber handling and simplify field connectorization.  Today, companies like OFS, with GiHCS® optical fiber cables, and Panduit offer a Graded Index Polymer Clad Fiber (GI PCF) fiber solution along with LSZH (Low Smoke Zero Halogen) cables and LC field-installable connectors interoperable with commonly used SFP modular transceivers on their switch lines for Fast and Gigabit Ethernet Uplinks and switch ports.

Such optical fiber cable solutions help ensure stable performance in:
• widely fluctuating temperatures from -20 to +105ËC (-4 to + 221ËF)
• high vibration
• exposure to common industrial oils and chemicals
• exposure to severe electrical noise
• situations where time for connector training is minimal
• installations where technicians are not expert in fiber optics

Maintenance and onsite cable repair in harsh, exposed conditions present other big issues for some installers.  In offshore applications where wind is stronger, towers are taller with larger wind turbines and longer blades than their onshore counterparts.  Recognizing these problems, fiber optic engineers have now designed and developed a simple crimp and cleave termination system that allows for connectorization of ruggedized fiber optic cable with no need for epoxies or polishing and simplified termination training.  Climbing the tower to repair or replace a data link is simplified with lightweight fiber optic cables and compact fiber optic tool kits that require no power during connector attachment.  Following the instruction manual is extremely important; not only does it save technicians effort to “crimp it right” the first time, with no consumables, the system also increases the number of terminations they can perform with one single kit. Figure 4

The simple steps for the field termination of optical fiber breakout cables involve:  first, stripping the waterblocked outer jacket material; then, crimping the connector either directly onto the fiber optic coating (LC, SC, ST and SMA type) or  ETFE-based buffer material (V-pin and F07-type connectors), depending on the connector, for strong, solid connector retention. Strong connector to cable retention is crucial for connectorization in a turbine where strong mechanical vibration is a concern.  The third step is to create an optical finish on the fiber, using the special precision cleave tool with a diamond blade.  This crucial, but simple step creates a near perfect optical surface for low connector insertion loss.  The cleaving step eliminates the tedious need to polish the fiber end-face.  No messy adhesives or polishing equipment needed, your connectorized cable is ready to transmit at Fast and Gigabit Ethernet data rates.

At trade shows, we perform hundreds of connector termination demonstrations.  To prove the simplicity of this termination system, we ask our uninitiated customers to try the stystem for themselves through our “Crimpe, Cleave and Leave” competition.  Contestants are timed while they terminate fibers and often achieve times under 40 seconds per connector.

With only four or five steps depending on connector type, field technicians can perform thousands of terminations using tools they are familiar with.  Finally, a stress-free fiber optic zone, the holy grail of data communications, if you will.

Curiosity and genuine interest about fiber optics kept people in our booth longer and in just a few minutes, many change their perceptions toward optical fiber use in just a few minutes, following these new and simple steps.  No more shoulders shrugging or eyes wandering, previous hesitation and doubtfulness are swept away.  Our hope is that all of our contestants remember the benefits of fiber in the wind applications industry, the simplicity of learning and using the cable termination process, and the fun they had with our “Crimp, Cleave, and Leave” contest.

In the early stages of our lives, we learn new things by exploring, studying, and trying them; each new skill with its own learning curve.  Similarly, adoption of renewable energy has its own learning curve and will take time, but the benefits for humankind are real. Windmills—basically unchanged in design for many centuries—have evolved into wind turbines, which now harness and transform the power of wind. This is made possible through technological advancements like simplified fiber optics, which contribute to a wind turbine’s safety, control, and efficiency.  We felt those winds of change, the change of people’s perceptions, and the change of their vision as they learned new things and new technologies. 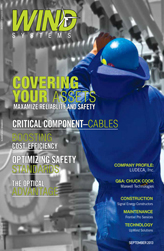