A brand new 62,000 square-foot campus has opened its doors in the Denver metro area, changing the face of wind, solar, and renewable energy education in America. Ecotech Institute is the first and only college entirely focused on preparing America’s workforce for careers in renewable energy and sustainable design, and the facility is sure to spark interest in these fields.

The architectural team was led by Ecotech’s parent company, Education Corporation of America, and Alabama-based Rob Walker Architects. They successfully transformed a vacant, large-footprint building into a progressive campus. The building is home to 30 classrooms, 12 state of the art computer and science labs (e.g. electrical, wiring, solar, wind safety, controls and environmental science), studios, student and faculty lounges, a library, and a variety of other amenities.

Site Selection
Education Corporation of America is often focused on selecting campus sites where they can make a positive impact on a neighborhood. Empty buildings are often an eyesore and can impact neighboring businesses. In this case, an old Amazing Jake’s family fun center was the previous tenant. Once transformed, new traffic, additional consumers and a pleasing appearance will continue to yield positive results. Figure 1

“We were focused on changing the empty commercial building into a community asset that is sustainable, functional, and attractive to its neighbors,” says Celeste Prestenbach, vice president, facilities planning and new campus development at the Education Corporation of America.

Focus on Wind Energy
Although there are energy and resource savings throughout the sustainable design of the building, a major component of the building and the school’s curriculum is wind energy. To support Ecotech’s commitment to wind, the front of the building is adorned with eight small wind turbines mounted on the roof to generate up to 4.8 kilowatts of electricity. In addition, a vertical axis wind turbine was installed to generate a total capacity of 4 kilowatts.

One unique component is a wind safety lab. The square room is simple, yet revolutionary. The 771 square-foot lab has a 20-foot ladder leading up to an 8×8 platform. This is where Ecotech instructors will teach wind safety techniques and practices. The students will be using the actual harnesses that would be used to go up and down a real wind turbine, helping simulate this significant element of a career as a wind technician. “This wind lab is the first of its kind, offering students a glimpse into a career where physical activity and safety are critical,” says Glenn Wilson, academic dean of students at Ecotech Institute. Figure 2

To carry the wind theme from the outside to the inside, ECA’s in-house interior design team integrated the shape and form of the wind turbine blades into the front gallery of the building through the repetition of a similar curve along the walls. This is more evident from a plan view of the interior. In addition to wind elements the building incorporates a variety of solar aspects, as well, including: 12 polycrystalline rooftop photovoltaic solar panels with a system capacity of 2.8 kilowatts; integral thin solar technologies embedded into the glass of the front building canopy with a capacity of 9.4 kilowatts; and two solar trees, each providing 16.9 kilowatts of electricity, which will generate over 50,000 kilowatt hours per year of electricity. All told, the campus will get more than 5 percent of its peak load electricity from wind and solar sources and will generate over 65,000 kilowatt hours of electricity annually.

Additional Energy Savings
Another key component of the campus is its rigorous energy savings and demand side management processes that will cut demand significantly. Some examples include demand control ventilation to modulate ventilation based upon occupancy levels in classrooms. This will dramatically reduce the cooling/heating during partially occupied periods. All rooftop air conditioning equipment will have economizers to provide 100 percent outside air during ideal outdoor conditions for cooling, and energy efficient lighting will reduce lighting energy consumption by 30 percent below standard lighting energy levels. In addition, a measurement and verification system provides real time monitoring of the campus power, natural gas, and water consumption. This information will be displayed in the lobby for visitor knowledge, but will also be recorded and used to determine further energy saving possibilities in the future.

The building also incorporates water and lighting efficiencies. For instance, motion sensors combined with a programmed lighting schedule limit the amount of time lighting stays on when rooms are unoccupied. The campus also includes four electric car charging stations, capable of delivering a full vehicle charge in two to four hours. The campus embraces the institute’s core concerns: exceptional education and commitment to the environment. Figure 3

Ecotech Institute launched its first round of classes in July 2010 in a temporary facility and the third quarter commenced January 10, 2011 in the new facility with almost 200 students enrolled.

Why Colorado?
Ecotech Institute chose to launch its first location in Colorado for many reasons, including its location, entrepreneurial culture, and passion for green job growth. Colorado’s culture, natural beauty, and green-leaning attitude fosters greener lifestyles, education, and careers. The campus is strategically located to serve workforce development throughout the Rocky Mountain region, one of the country’s fastest growing areas for renewable energy.

In 2009, the Colorado Governor’s Energy office, with funding from the U.S. Department of Energy and Clean Energy Funds directed by the state legislature, spent over $25.2 million in fiscal year 2009, with 9 percent, or $2,268,000, directed to renewable energy and sustainability projects.

In 2010, the State Legislature voted to increase the Renewable Energy Standard to a “Best in the West” 30 percent by 2020. The new law will create thousands of clean-energy jobs, further diversify Colorado’s overall energy portfolio and lead to 100,000 solar rooftops over the next decade.

Colorado is also home to public and private institutions that are creating innovation and employment. The National Renewable Energy Laboratory (NREL), the University of Colorado at Boulder, Colorado School of Mines, and Colorado State University created the collaboratory in 2007 to research and develop new, cleaner energy technologies. Figure 4

In wind alone, Colorado makes the grade in national rankings. In 2009 Colorado ranked ninth in wind projects installations by state, adding 178 MW of wind power, ranked eighth in installed wind capacity and eleventh in wind resources. Not only is Colorado a fantastic place to live and work, its culture lends itself to Ecotech’s mission: when you live in a state than appreciates natural beauty, it helps people to understand the importance of sustainability.

What’s Wind’s Future?
According to “Clean Tech Job Trends 2010,” three clean tech categories in particular held their ground as the dominant innovative leaders throughout 2009, based upon number of patents granted: solar (at approximately 31 percent), wind (at approximately 19 percent) and hybrid vehicles (at approximately 15 percent).

It stated that “In 2007, the U.S. RE&EE industries generated more than $1 trillion in sales and created more than 9 million jobs—including $10.3 billion in sales and more than 91,000 jobs in Colorado. U.S. RE&EE revenues represent substantially more than the combined 2007 sales of the three largest U.S. corporations—Wal-Mart, ExxonMobil, and General Motors ($905 billion). RE&EE industries are growing faster than the average U.S. industry and comprise some of the most rapidly growing industries in the world, including wind, photovoltaics (PV), fuel cells, recycling/remanufacturing, and biofuels.”

In 2009, the Executive Office of the President, Council of Economic Advisors, published a report “Preparing the Workers of Today for the Jobs of Tomorrow.” Here are a few of its findings:

• Jobs devoted to environmental improvement grew far faster than other occupations from 2000-2006 and the BLS projects fast relative growth through 2016;
• There are growing opportunities in these fields, particularly for workers with technical skills;
• CEA analysis suggests that particular areas of “green” potential (e.g., wind and turbine manufacturing, mass transit, or producing energy-efficient automobiles) pay more on average than otherwise comparable jobs. They also are more likely to be held by primary earners in the household and to be unionized;
• Well-trained and highly-skilled workers will be best positioned to secure high-wage jobs, thereby fueling American prosperity. Occupations requiring higher educational attainment are projected to grow much faster than those with lower education requirements, with the fastest growth among occupations that require an associate’s degree or a post-secondary vocational award.

Lastly, the research “U.S. Metro Economies: Current and Potential Green Jobs in the U.S. Economy” (2008), prepared by Global Insight for The United States Conference of Mayors and the Mayors Climate Protection Center, published some interesting insights about the wind industry.

The report states that “The bulk of jobs related to wind infrastructure will come in the manufacturing of equipment. The technology of wind electricity is relatively new, but the manufacturing base for its production is very similar to past products. Every state in the country has firms and a labor force with experience making products similar to the blades, gearboxes, brakes, hubs, cooling fans, couplings, drives, cases, bearings, generators, towers, and sensors that make up a wind tower.” 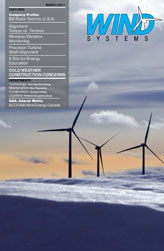 Potential in the Panhandle

To Boom or Not To Bust?