As of January 2009 Texas is the nation’s number-one producer in megawatts of installed utility-scaled wind power, with a total of 7,116 megawatts. As a result of the growth in Texas wind farm development, Mortenson Construction and Brundage-Bone Concrete Pumping have seen an unbelievable boost in wind farm projects.

Farm Forecast
The United States is the world leader in wind electricity generation. As of September 2008, wind provides 20,152 megawatts of its electrical capacity, which is enough electricity to serve 5.3 million U.S. homes. This is the electricity-generating equivalent of 28.7 million tons of coal, or 90 million barrels of oil.

According to the American Wind Energy Association (AWEA) the U.S. wind energy industry installed 5,429 megawatts of new wind capacity in 2007, crushing all of its previous records. In 2006 a record 2,454 megawatts of new capacity was installed, according to the U.S. Department of Energy in their Annual Report on U.S. Wind Power, Installation, Cost, and Performance Trends: 2006. This expanded America’s total wind power generating capacity by 45 percent in 12 months. This record also brought an investment of more than $9 billion into the economy.

Even though Germany has more generating capacity installed (about 23,000 megawatts), the United States is producing more electricity from wind because of its much stronger air currents. AWEA announced on its Web site in January 2009 that a record 8,358 megawatts of new wind capacity was added in 2008 in the United States, again crushing all of its previous records. 2008’s installation of new wind capacity expanded America’s wind energy fleet by 50 percent, bringing total U.S. capacity to about 25,170 megawatts. Texas takes the number-two spot next to first place North Dakota for wind energy potential.

A study by the U.S. Department of Energy showed that wind could provide 20 percent of U.S. electricity by 2030. This would in turn support 500,000 jobs and reduce greenhouse gas emissions equal to removing 140 million vehicles from the road.

Natural Growth
According to Mortenson, the general contractor for the project, the development of the 79.5-megawatt Majestic Wind Farm is part of an initiative by Xcel Energy to supplement its traditional power for the Amarillo, Texas, area with renewable energies.

Xcel is a leading combination electricity and natural gas energy company that offers a comprehensive portfolio of energy-related products and services to 3.3 million electricity customers and 1.8 million natural gas customers. Mortenson had six other wind turbine projects going at the same time as the Majestic Wind Farm. (see Fig. 2)

“At Brundage we’ve had a steady amount of wind turbine projects in the Texas area,” according to Ross Finnestad, branch manager of the company’s Oklahoma City and West Texas branches, a subcontractor on the project, “and we don’t see it slowing down anytime soon.”

Project Pressures
The aggressive schedule was perhaps the most challenging part of this project, especially when Mortenson was coordinating with several different landowners, municipalities, and utility contractors at one time. The Oklahoma City-based Brundage team arrived on site in late July 2008 and was hired by Mortenson to convey 18,000 cubic yards (13,762m3) of concrete for 53 wind turbine foundations and pedestals by early fall 2008. Mortenson’s experience with both the Brundage team’s expertise and their line of Putzmeister Telebelts is what led them to working together again on the Majestic Wind Farm.

“A typical week on the job included early morning pours for the foundations and pedestals that started at two a.m., Monday through Saturday,” Finnestad says. “Usually it would be a 10-hour day. We conveyed concrete for two foundations and two pedestals six days a week, and the Telebelts made what could have been a grueling job more efficient. The purpose of the foundation for a wind turbine is to give the tower stability below the pedestal, which connects it to the tower. The tower rises skyward to support the turbine where the wind will turn its blades, generating as much electricity as possible.”

“The TB 110 proved to be an invaluable asset on this job. Given the tight time constraints for this project as well as the budget, we needed a machine that could be easily operated by one individual to reduce the amount of workers we needed onsite. Production from the TB 110 was outstanding,” Finnestad says, “and it met every need we had for the project.”

Concrete placement for the Majestic Wind Farm occurred during the hot Texas summer, which made the use of the TB 110 even more beneficial. According to Mortenson, using the TB 110 to place the concrete eliminated the possible hose, pipe, or slickline problems that could have been encountered if they had used an alternative method to place the concrete. Because of the heat, the chances of clogs occurring in a boom pump end hose, for example, is much more likely. This not only causes a decrease in production, but also invites the potential of having cold joints occur in the foundation of the concrete. Mortenson’s use of Brundage’s TB 110 prevented these issues.

The TB 110 features a 106’ 1” (32.34m) horizontal reach. Finnestad also notes that the TB 110 conveyed the concrete smoothly, rising easily up the feed conveyor to the main belt from which it was delivered precisely where needed. “We had to move the Telebelt from one foundation and pedestal to the other for all 53 wind turbines so the quick, easy setup and teardown of our TB 110 made for a seamless process in moving to the next foundation,” Finnestad says. “We were able to set up the Telebelt in one location for each foundation and pedestal placement, and we were able to reach every spot where the concrete needed to be conveyed with the quick, telescoping action of the four-section boom.”

The standard folding hopper also contributes to making setup a breeze on any site, including the Majestic Wind Farm. “The side panels of the folding hopper fold into the feed conveyor and the end panels connect with linchpins,” he adds. “The belt can easily be fed by a ready mix truck from three different sides of the hopper, if necessary. The fast placement of the concrete at more than 100 cubic yards per hour (76m3/hr) and the minimal cleanup were added advantages that kept the project moving ahead.”

The Oklahoma City branch of Brundage has five TB 110s, one of which was used on the Majestic Wind Farm. Brundage has a total of 64 branches throughout the United States, with the corporate offices located in Denver, Colorado. 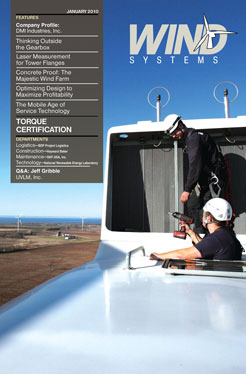