The American Recovery and Reinvestment Act of 2009, or “ARRA,” added two new and significant provisions, enacted as part of an effort to spur domestic development and installation of renewable energy, that are available to developers to help finance their wind projects.

The first provision permits the wide range of renewable energy facilities that qualify for the federal production tax credit (PTC) under Section 45 of the Internal Revenue Code (the “Code”), including those powered by wind energy, to claim the federal investment tax credit (ITC) under Section 48 of the Code in lieu of the PTC. While the PTC is based on the amount of electricity produced and sold to an unrelated person during the 10-year period beginning on the date the facility is placed in service (currently at the rate of 2.1¢ per kWh of such electricity for wind), the ITC is a one-time credit claimed in the year the facility is placed in service that is generally equal to 30 percent of the cost of the renewable energy facility.

The second provision created a new program that enables PTC-eligible and ITC-eligible facilities to receive a cash grant from the Treasury (the “Grant”) in lieu of the PTC or the ITC, in an amount generally equal to the amount of the ITC that would otherwise be available to the facility. The Grant is designed to be paid out faster, and to be claimed more conveniently by developers, than traditional tax credits.

Two notices were recently issued by the federal government establishing the procedures that must be followed to qualify for and claim these incentives. Specifically, in June 2009 the IRS provided guidance for taxpayers wishing to claim the ITC in lieu of the PTC; and in July 2009 Treasury issued guidance for applicants who decide to claim the Grant in lieu of the PTC or the ITC.

Claim Choices
Initially, an owner of a renewable energy project eligible for the PTC, such as a wind facility, must determine whether the expected benefits of the PTC are more or less than the benefits of the ITC or Grant. This requires a consideration of various factors. While the PTC requires a sale of electricity to an unrelated person, the ITC and the Grant do not, so an “in the fence” project—the output of which will be used by the owner—cannot claim the PTC unless the ownership and operation of the project is restructured. In addition, a financial model should be developed to get a clear picture of the net present value associated with the PTC versus the ITC and Grant, which will depend on various factors including the cost, capacity rating, and the net capacity factor of the project. The model should also reflect the fact that the ITC and Grant both require the owner to reduce the basis in the project by an amount equal to 50 percent of the ITC or Grant, thus reducing the amount of depreciation that may be claimed with respect to the project (the PTC does not require any basis reduction), and the fact that the PTC must be reduced (up to 50 percent) by the percentage of total project basis that is funded by tax-exempt or government-subsidized financing (while the use of such financing no longer requires any reduction to the ITC or the Grant).

Any decision to take the PTC must also consider the ability of the owner to utilize or otherwise recognize the benefit of a tax credit. Because developers often operate at a loss in the early years during project development, the Grant may offer the potential to recognize value that may not otherwise be available, at least in the absence of the implementation of a complicated and costly “tax equity” structure. This is especially significant in the current financial environment, which has seen a dramatic decline in the availability of tax equity finance for wind energy projects. Other factors that should be considered include the production (and thus value) risk inherent in the PTC and liquidity concerns, as recapture of the ITC may be required in the event of certain transfers.

If, after an analysis of the relevant factors, the owner of a renewable energy project decides to claim the ITC or Grant in lieu of the PTC, it has the option of either: 1) making an election to claim the ITC pursuant to the procedures set forth in IRS Notice 2009-52 (the “Notice”) or; 2) claiming the Grant pursuant to the guidance issued by the Treasury pursuant to Section 1603 of the ARRA (the “Grant Guidance”). While the Grant may often be preferable where the owner cannot utilize a tax credit, simply claiming the Grant and letting the accelerated depreciation deductions go unutilized would leave a present value benefit on the table that nearly equals the ITC or Grant amount. In an effort to recognize the benefit associated with these deductions, the owner may pursue a monetization structure with part or all of the project owned by a tax equity investor. In this case the tax equity investor may prefer the ITC over the Grant for accounting or other reasons.

As illustrated here, the decision to claim the PTC, the ITC, or the Grant is a complicated one that should be based on a detailed analysis of various factors. Accordingly, we highly encourage owners of renewable energy projects to consult legal counsel before choosing which path they will take. The requirements and procedures set forth in the Notice and the Grant Guidance will now be addressed.

ITC/PTC Considerations
To claim the ITC for a wind facility, a taxpayer must file a completed Form 3468—available at www.irs.gov/pub/irs-pdf/f3468.pdf—with the taxpayer’s income tax return for the year in which the wind facility is placed in service (which occurs once the facility is ready and available for its specific use). In addition, a statement containing the following information must be submitted with the Form:

The Notice also requires the taxpayer to maintain adequate books and records, including with respect to the above-delineated information that is submitted with Form 3468 and all supporting documentation.

While the Notice provides guidance on how a taxpayer may elect the ITC for certain PTC-qualified energy property, the IRS has not addressed all the relevant details. For example, no definition of “facility” is provided, nor is any definition provided for what constitutes property “integral” to a qualified facility. As a result, the IRS might determine, for example, that each wind turbine constitutes a “facility” for this purpose, or it might consider the entire wind farm to constitute the “facility.” Furthermore, the Notice does not delineate what each taxpayer must provide to satisfy the “detailed technical description” requirement.

Grant Claims/Guidance
The Grant Guidance specifies the types of property included in a renewable energy project, the costs of which may be taken into account in determining the Grant amount (such property, “Eligible Property”). Many of the rules set forth in the Grant Guidance depart from those applicable to the ITC, including the rules relating to the property that may be taken into account, and often in a manner that is materially favorable to a developer or applicant.

Applications may be submitted online at www.treasury.gov/recovery and must contain supporting documentation such as design plans, final engineering design documents stamped by a licensed professional engineer, and documents establishing nameplate capacity. An applicant has the option of filing a single application for each grouping of Eligible Property that is functionally interdependent—e.g., each wind turbine together with its tower and pad—or for multiple groupings of interdependent Eligible Property that are part of a single project and located at the same site: e.g., a wind farm. In the latter case, an applicant that cannot complete construction of the wind farm before January 1, 2013, may still apply for the Grant for the Eligible Property that has been placed in service prior to that date.

The Grant will be paid to approved applicants within 60 days from the date the completed application is received by Treasury or, if later, the placed in service date. All payments will be made via electronic funds transfer no later than five days from the date notice of approval is given. The Grant is generally not includible in the income of the recipient. However, as is the case with the ITC, an election may be made by a lessor of a renewable energy project to allow the lessee to claim the Grant; while no reduction to the basis of the project is required as a result of this election, the lessee must agree to include 50 percent of the Grant amount in income ratably over the ensuing five-year period. Furthermore, the lessor and lessee must agree that the lessor waives all rights to receive the Grant, the PTC, or the ITC with respect to the Eligible Property. The election is made by a written agreement between the lessor and the lessee that contains specific information delineated in the Grant Guidance. This agreement must be included in the lessee’s Grant application. The election is irrevocable and may be made with respect to each Eligible Property leased by the lessor to the lessee.

Eligible Property must be placed in service between January 1, 2009, and December 31, 2010, regardless of when construction begins, or placed in service after 2010 and before January 1, 2013 for wind projects, provided that construction of the Eligible Property begins in 2009 or 2010. Construction begins for this purpose when “physical work of a significant nature begins,” and a safe harbor is provided pursuant to which such physical work will be deemed to have occurred when the applicant incurs more than 5 percent of the total cost of the Eligible Property, excluding the cost of any land and preliminary activities.

Generally, governmental and tax-exempt entities, and pass-through entities that have a governmental or tax-exempt entity as a direct or indirect owner (each, a “Disqualified Person”) are ineligible for the Grant; however, a taxable “blocker” C corporation may be created to qualify. Only owners and, if certain conditions are met, lessees of Eligible Property are able to apply for the Grant. Applicant eligibility is determined as of the time Treasury receives the application.

The basis of Eligible Property on which the Grant is calculated is determined in accordance with the general rules for establishing the basis of property for federal income tax purposes. Costs that will be deducted for these purposes in the year in which they are paid or incurred are not includible in the basis. Applicants must submit with their Grant application documentation to support the cost basis claimed for the Eligible Property, including, in the case of projects with Eligible Property that has a cost basis in excess of $500,000, an independent accountant’s certification of such basis.

The Grants should prove helpful to many wind developers, especially in the current economic climate where capital is scarce and generally attainable only by paying large returns. There are several requirements that must be satisfied in addition to those described here; as a result, applicants are encouraged to consult with counsel before submitting an application.

Note: Jessica A. Graf is a shareholder in the Boston office of Greenberg Traurig LLP and is a member of the firm’s Environmental, Energy & Natural Resources and Tax practices. She concentrates her practice in renewable energy and real estate finance, environmental law, land use, and energy projects. Justin B. Mead is a shareholder in the Miami office of Greenberg Traurig. He is a member of the firm’s Tax and Energy practices, concentrating his practice on transactional tax and general tax planning, with an energy focus. 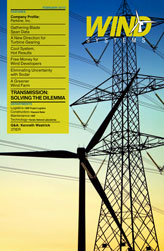 Individual Pitch Control and Its Impact