Minnesota Power and the Duluth Port reached a supply chain milestone recently as the 15th ship bearing wind generation equipment destined for a Minnesota Power wind installation in North Dakota arrived at the harbor beneath the Aerial Lift Bridge.

The BBC cargo ship, Peter Roenna arrived in Duluth in mid-July carrying over two dozen wind energy components after a voyage from Brande, Denmark, where the equipment is manufactured by Siemens. Two other shiploads of Siemens wind equipment bound for North Dakota arrived at the port in June; two more are expected before the end of September.

Since the port first started handing these project cargoes for Minnesota Power, a total of 15 shiploads of wind energy equipment — including these nacelle cooling units and generators — have crossed the Atlantic Ocean, sailing through the Saint Lawrence Seaway and across the Great Lakes into Duluth. The components were then loaded onto trucks for delivery to the Bison Wind Energy Center near New Salem, North Dakota.

The first shipments in 2006 included blades for a 98-MW wind farm in Oliver County, N.D. from which Minnesota Power purchases all the electric generation. That wind installation was constructed, and is owned by, NextEra Energy. Minnesota Power subsequently built the first three phases of its Bison Wind Energy Center adjacent to the initial wind farm located in Oliver County about a 90-minute drive east of Bismarck, North Dakota.

Bison 4, a 205-MW addition to the wind farm, will utilize larger, more powerful Siemens wind turbines than those installed last year in phases 2 and 3 of the project. Because the generators are more powerful, it will take only 64 turbines to produce about the same amount of electricity produced by 70 turbines in last year’s installation. Once operational, Bison 4 will push Minnesota Power past the 25 percent renewable energy goal established by Minnesota legislation 11 years ahead of schedule.

The first of the 64 new wind turbine generators was erected and installed earlier this month. A nacelle was attached to the top of the first Bison 4 tower July 2, and three days later, three wind turbine blades attached to a hub were “flown” to the tower top. Two large crawler cranes are positioned to continue Bison 4 assembly throughout the summer.

“This latest shipment of wind components is meaningful on several levels,” said Dave McMillan, senior vice president of external affairs at ALLETE and executive vice president of Minnesota Power. “It turns a spotlight on the global nature of sustainable energy and the importance of efficiently transporting goods and services. This international ship’s arrival represents the resourcefulness Minnesota Power has shown in striving to reach the renewable energy mandate.” McMillan also serves on the Saint Lawrence Seaway Development Corporation’s Advisory Board.

The Clure Public Marine Terminal — this Port’s only general cargo terminal — is owned by the Duluth Seaway Port Authority and operated by Lake Superior Warehousing. “The strategic location of this port, the capacity of this facility, and the quality of LSW’s workforce has earned Duluth a reputation for efficient cargo handling, secure storage and delivery, particularly for shippers of dimensional cargo,” noted Vanta Coda, Port Authority executive director. “We are pleased to have been able to serve as a transport hub for Minnesota Power’s wind projects since their launch, and congratulate them on meeting the 25 percent renewable energy goal more than a full decade ahead of the state’s 2025 goal.”

This year, to make delivery even more efficient, the generators were separated at the manufacturer from the back ends (main body) of each nacelle, rather than being shipped together as one large dimensional unit as in previous years. Dividing the huge power units into two parts makes them easier to transport by truck, eliminating the requirement to hire extra “flag crew” vehicles to accompany the trucks from the Port of Duluth to New Salem.

“We appreciate the support, the trust placed in us by Minnesota Power,” added Jonathan Lamb, LSW president. “We’ve forged a close working relationship over these many years. We also know how much moving their project cargo through the Port of Duluth also supports the greater business community.”
Tower sections, manufactured in Manitowoc, Wis., using steel produced with Minnesota iron ore, will be transported through Hinckley and Brainerd on their way to Bison as construction continues. With a portion of the nacelle units now manufactured at a Siemens plant in Hutchinson, Kan. and the turbine blades fabricated in Fort Madison, Ia. Bison 4 will have more American-made components than the earlier Bison phases. 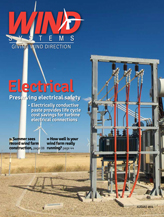