The Energy Department has released a report showing progress for the U.S. offshore wind energy market over the past year, including two projects that have moved into the initial stages of construction, and 14 projects that are in the advanced stages of development– together representing nearly 4,900 MW of potential offshore wind energy capacity for the United States. Further, this year’s report highlights global trends toward building offshore turbines in deeper waters, using larger, more efficient turbines, increasing the amount of electricity that can be delivered to consumers.

This year’s U.S. Offshore Wind Market and Economic Analysis, produced by the Navigant Consulting, builds on past reports by providing additional information on offshore wind’s potential to increase U.S. electricity capacity, create jobs, and outlines policy developments that are influencing the offshore wind market. This report, along with the Energy Department’s ongoing offshore wind research and development (R&D) efforts, and recently announced advanced technology demonstration projects, are part of the Energy Department’s national offshore wind strategy that supports the development of a suite of tools and advanced engineering prototypes that will assist offshore wind project developers and industry stakeholders.

The report’s key findings include:
• Fourteen U.S. projects, representing approximately 4.9 GW of potential capacity, can now be considered in advanced stages of development, meaning they have either been awarded a lease, conducted baseline or geophysical studies, or obtained a power purchase agreement. The report: Two of the United States’ most advanced projects — Cape Wind and Deepwater’s Block Island project — have moved into their initial stages of construction.
• Three of these advanced stage projects — Fishermen’s Energy, Dominion, and Principle Power — were selected to receive up to $46.7 million each from the Energy Department for the final design and construction of their Advanced Technology Demonstration Projects off New Jersey, Virginia and Oregon. These projects will demonstrate the use of innovative foundations and advanced turbines that will provide valuable cost and technical data to the offshore wind community.
• Globally, offshore wind projects continue to trend farther from shore into increasingly deeper waters while increased turbine sizes and hub heights have contributed to higher reported capacity factors.
• Globally, the average capital cost for offshore wind projects completed in 2013 fell 3.7 percent per kWh from 2012, with an additional decrease expected in 2014, while total project installation costs have fallen 6 percent since 2011.
• The shift to more distant locations and larger capacity turbines, along with the goal of reducing tower top mass, has driven continued innovation in drivetrain configurations, with an increase in the deployment of direct-drive and medium-speed drivetrains expected to accompany the deployment of the next generation of 5 to 8 MW turbines.
• The Bureau of Ocean Energy Management (BOEM) has continued to make steady progress on its initiative to facilitate siting, leasing and construction of offshore wind energy projects on the Atlantic Outer Continental Shelf. In 2014, BOEM announced additional competitive lease sales for renewable energy off Massachusetts, Maryland and New Jersey. 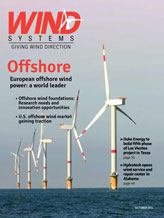 PTC or not, the wind industry is an ever-changing landscape for post-warranty maintenance

The science behind A superior wear-resistant coating for roller bearings