• AGMA’s “Design and Specification of Gearboxes for Wind Turbines” (AGMA 6006-A03), which provides information for specifying, selecting, designing, and manufacturing wind turbine gearboxes. This standard has been adopted by ANSI and the American Wind Energy Association (AWEA).
• AMSE’s “Wind Turbines” (ASME PTC 42), which provides instructions for conducting performance tests of wind turbines. This standard has been adopted by ANSI.
• IEC’s “Wind Turbine Generator Systems” (IEC 61400), which is a set of design requirements to ensure that wind turbines are appropriately engineered.

SEPs and Frand Licensing
It is common for a standard-setting organization to develop a standard that includes a patented invention. When an industry standard includes technology covered by patents, the patents are referred to as “standard-essential patents” (SEPs). Standard-setting organizations commonly have rules that govern licensing of SEPs owned by companies that participate in developing standards. The most common rule is that a SEP must be licensed to an interested party under “fair, reasonable, and non-discriminatory” (FRAND or RAND) terms. In other words, before a patent becomes an accepted part of an industry standard, which as a practical matter industry participants are generally required to adopt, standard-setting organizations will require the patent owner to agree to provide a license that includes FRAND terms (a FRAND license) to any interested party. FRAND licenses are intended to prevent patentees from engaging in licensing abuse based on the negotiating leverage generated as a result of having their patented invention included in an industry standard.

Injunctive Relief for SEPs
A recent hot topic in federal courts, government agencies, scholarly publications, mass media, and congressional hearings is the availability of injunctive relief for SEPs. An injunction is an equitable remedy issued by a court that requires a party to perform, or restrains a party from performing, a particular act. In a patent infringement action, a U.S. federal court may grant an injunction that prevents the infringer from making, using, selling, offering for sale, or importing the patented invention. The factors that must be weighed in granting an injunction are whether (1) the patent holder has suffered an irreparable injury, (2) monetary damages are inadequate to compensate the patent owner, (3) the balance of hardships favors the patent owner over the infringer, and (4) the public interest would not be disserved by an injunction. These factors are often referred to as “the eBay factors” after a 2006 Supreme Court case1.  Similarly, in a patent action before the U.S. International Trade Commission (ITC) under 19 U.S.C. § 1337 (i.e., unfair practices in import trade), if the ITC finds that importation constitutes infringement of a valid and enforceable U.S. patent, it may direct that the articles “be excluded from entry into the United States, unless, after considering [1] the effect of such exclusion upon the public health and welfare, [2] competitive conditions in the United States economy, [3] the production of like or directly competitive articles in the United States, and [4] United States consumers, it finds that such articles should not be excluded from entry.”2

In patent infringement cases involving a SEP, the issue is whether an injunction can be ordered when a patent holder must offer a license to the SEP on FRAND terms. Specifically, should the inclusion of a patent in an industry standard limit the patent holder’s ability to obtain an injunction (or exclusion order from the ITC) against infringers? Patent owners argue that without the threat of an injunction, licensees will not agree to pay a full FRAND royalty without expensive litigation. Accused infringers respond that their right to a FRAND license is not lost simply because the parties are unable to agree on what price constitutes a FRAND royalty.

On January 8, the Department of Justice’s (DOJ) Antitrust Division and the U.S. Patent and Trademark Office released a statement entitled “Policy Statement on Remedies for Standards-Essential Patents Subject to Voluntary F/RAND Commitments” (hereinafter the “DOJ Statement”).3 The DOJ Statement argues that an injunction for a FRAND-encumbered SEP may be inconsistent with the public interest, with some notable exceptions. For example, an injunction may be appropriate where the alleged infringer has refused to take a legitimate FRAND license. Specifically, the DOJ Statement argues that “[i]n some circumstances, the remedy of an injunction or exclusion order may be inconsistent with the public interest. This concern is particularly acute in cases where an exclusion order based on a F/RAND-encumbered patent appears to be incompatible with the terms of a patent holder’s existing F/RAND licensing commitment to [a standards-setting organization].”4 On the other hand, the DOJ Statement asserts that an injunction “may still be an appropriate remedy in some circumstances, such as where the putative licensee is unable or refuses to take a F/RAND license and is acting outside the scope of the patent holder’s commitment to license on F/RAND terms.”5

The Federal Trade Commission (FTC), which shares antitrust enforcement authority with the DOJ, did not join in the DOJ Statement. However, the FTC recently expressed its views regarding SEPs and injunctive relief in an amicus curiae brief filed with the U.S. Court of Appeals for the Federal Circuit (“Federal Circuit”) on December 5, 2012, in Apple v. Motorola, App. Ct. Nos. 2012-1548 and 2012-1549 (hereinafter the “FTC Brief”).6  The FTC asserted that “[p]atent hold-up risks harming competition, innovation, and consumers because it allows a patentee to be rewarded not based on the competitive value of its technology, but based on the infringer’s costs to switch to a non-infringing alternative when an injunction is issued.”7 The FTC Brief suggests using the four eBay factors discussed above, which take into account important competition and innovation policy issues, and that “[w]hen a patentee makes a FRAND commitment to [a standard-setting organization], the irreparable harm analysis, balance of harms, and the public interest will generally militate against an injunction.”8

SEPs and the Wind Industry
As the wind industry in the United States continues to grow, technology standards will play an important role for wind power project developers, equipment suppliers, services providers, parts manufacturers, utility service providers, and researchers. For example, standards are critical for harmonizing wind power with existing utilities (see IEEE 1547 “Standard for Interconnecting Distributed Resources with Electric Power Systems”). In fact, the AWEA has taken on the task of developing industry, national and international wind energy voluntary consensus standards, where “[t]echnical experts and people materially affected by a particular standard govern the content of a standard being developed.”9 With the influx of increased research and development, and the issuance of an abundance of patents in the wind industry, it is nearly inevitable that industry standards will incorporate patented technologies. Wind industry companies are therefore potential SEP owners, as well as FRAND licensees of SEPs, and should be prepared for the financial and legal obligations that may arise from SEPs. With these developments in mind, some practical considerations for the wind power industry are outlined below.

• Standards Participants Must Disclose Essential Patents Prior to Approval
In addition to requiring a commitment to grant licenses on FRAND terms, standard-setting organizations typically require participants to disclose any patents they own that cover proposed technology before including the technology in a standard. When a patent holder files a patent infringement suit based on a SEP, the accused infringer can assert a number of affirmative defenses if the patent holder failed to disclose its patent rights to the standard-setting organization before adoption of the standard. For example, potential defenses include (1) equitable estoppel (i.e., misleading conduct that suggests that the patent owner will not enforce its patent rights), (2) patent misuse (e.g., failure to license under FRAND terms) and (3) implied license (e.g., through consideration other than through a FRAND license; where patent owner “urges” others to practice the patent in order to obtain some benefit). Thus, misconduct or deceptive practices in the standard-setting process can render a SEP unenforceable due to the attempted extension of patent rights beyond their lawful scope.10 Further, misconduct in the standard-setting process (such as concealment of patents) might lead to claims that the patent holder violated federal antitrust laws or committed fraud through deceptive behavior.

• The Details of a FRAND License
A commitment by a patent holder to engage in bilateral licensing negotiations ensures that the patented technologies will be available to parties seeking licenses. First and foremost, a FRAND license must be “fair,” which basically means that the terms must not be anticompetitive in nature (thereby creating a monopoly for the patent holder).

A FRAND license further requires the terms to be “reasonable,” which generally means that the amount of the royalty must be reasonable. This issue is at the heart of most SEP cases, and once a court determines a reasonable royalty, the case (including any issues regarding injunction or exclusion) is typically adjudicated quickly. Various facts can be used to determine whether a particular royalty is reasonable, including, but not limited to: (1) the existence and viability of technical alternatives to determine value, (2) the cost of the next-best alternative, (3) royalties charged by other companies for essential patents of comparable number and value, and (4) royalties charged by the licensor in similar competitive markets.11  One of the most controversial issues in FRAND licensing is whether the reasonable license price should include the value contributed by the standard-setting organization’s decision to adopt the standard.

Lastly, a FRAND license requires that the terms and the rates be “non-discriminatory,” which requires that patent holders treat similarly-positioned licensees in a similar manner. That means, for example, that manufacturers should be offered licenses on similar terms to other manufacturers, and end users should each be offered similar terms (but not necessarily the same terms offered to a different class or group of licensees).12

• Other Practical Considerations
The term “standards essential patent” can be a misnomer or generalization because one must look to the specific claims of the patent in question to determine whether they truly cover the standard in question — and by extension all devices that comply with that standard. Oftentimes, in a SEP infringement action, when the claims are interpreted by the court, all of the patent claims of an asserted patent do not cover both the standard and the accused device.

Another affirmative defense in a patent infringement action may include that the asserted patent is a SEP, and therefore that any damages can be no more than a FRAND royalty and no injunction can be ordered. A FRAND royalty — even if the patent is found to be valid and infringed — would be preferable to lost profit damages and a permanent injunction. However, these considerations do not mean that patent holders should be dissuaded from seeking to have their patents included in industry standards (and thus be SEPs). In fact, patent holders have obvious advantages when their portfolio encompasses SEPs. In addition to the industry-wide royalties collected from FRAND licenses, SEP status can confer an implicit presumption of infringement in licensing negotiations with respect to standard-compliant devices. This can be an important advantage in a patent dispute.

Conclusion
The more cost-efficient, reliable, and abundant wind energy becomes, the more important standards will become to make the associated products and services more interchangeable and interoperable. As such, interested parties in the wind industry should be aware of the legal and business implications associated with SEPs.

* The views expressed in this column are the personal views of the authors, and do not reflect those of Jones Day or its clients. 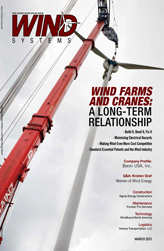