As part of its local production strategy, Vestas has inaugurated its hub and nacelle factory in Aquiraz, Brazil, at a ceremony attended by the governor of Ceará, Camilo Santana, and key stakeholders from the Brazilian wind energy sector.

The new factory is part of Vestas’ plans to meet the increasing production demands in Brazil and Latin America, including the 376 MW of announced orders for projects in Brazil that Vestas received in 2015. In accordance with recent Brazilian Development Bank (BNDES) approval, Vestas expects to localize 70 percent of hub and nacelle manufacturing for the Brazilian market.

“With some of the best wind resources in the world, Brazil has a huge potential for wind power and remains one of Vestas’ key strategic markets,” said Rogério Zampronha, general manager for Vestas Brazil, while speaking at the inauguration. “Our investment in this factory is a key part of providing our customers a strong business case here and underlines Vestas’ competitiveness in Brazil.”

The factory will produce hubs and nacelles for the V110-2.0-MW turbine model that was recently honored as the Wind Turbine of 2015 under the category of onshore wind turbines up to 2.9 MW.

In addition to the factory, Vestas has agreements with Aeris to produce blades and with ABB to produce generators locally, and it currently maintains 13 wind farms in Brazil, including the Xangri-lá (RS) wind farm that produces electricity for the Honda car manufacturing facility located in Sumaré, São Paulo.

Vestas has been present in the Brazilian market since 2000 and has since then installed 364 wind turbines that represent a total installed capacity of 713 MW.

For more information,
go to www.vestas.com. 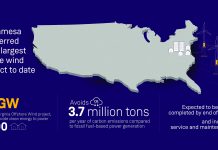