The reliability of wind turbines is a major issue for the industry. Wind turbine failures can be extremely costly in terms of repair costs, replacement parts, and in lost power production due to downtime. Generally the gearbox is not the most likely component to fail in a wind turbine, but a gearbox failure can have a major effect on the turbine availability. If a gearbox failure occurs, the lead time on replacement components such as large bearings or gears can be significant. If the wind turbine is offshore, there can be added complications and delays associated with needing a suitable maintenance vessel, lifting apparatus, and the right weather conditions before any maintenance can take place.

If a gearbox failure occurs, forensic analysis of the failed components allows us to understand the failure mode and the root cause behind a failure. Romax Technology undertakes forensic analysis using a combination of expert knowledge in bearings and wind turbine gearbox design, as well as a range of software simulation tools to provide detailed gearbox analysis. As the wind turbine industry matures, an increased understanding of failure modes and root causes means that we can guard against gearbox failures at the design stage.

Wind turbine gearboxes are generally designed using a range of different software simulation tools, computer models, and calculation methods. Models applied across the industry range in complexity from simple gear contact models and bearing stiffness models to fully-fledged whole system simulations. Our RomaxDesigner software allows us to generate full gearbox and drivetrain models that incorporate all major component interactions and flexibilities. Non-linear bearing models, gear mesh models, shaft deflections, gearbox housing deformations, and interactions with the nacelle bedplate and gearbox mounts can all be considered in a single, fully-coupled analysis. By calculating accurate operating loads and misalignments for each gear and bearing in the system we can determine gear and bearing stresses and predict individual component lives. Complex interactions in planetary gear sets are accurately modelled, allowing us to calculate load sharing between each planet gear load path.

The question remains: What level of detail is required in a model to accurately represent a wind turbine gearbox? Simple models are useful because they can be quickly and easily used to test different design concepts, but the only way to reliably capture all of the component interactions is to use a single fully-detailed model. Currently, wind turbine gearbox design standards do not explicitly recommend the consideration of gearbox housing flexibility or planet carrier flexibility in the design process. However, in operation, each element will flex under load. We conducted detailed research at Romax Technology to investigate the influence of different flexibilities within a gearbox and drivetain model and assess their impact on the predicted durability of the gearbox.

The drivetrain and gearbox model used for this research is based on the gearbox currently being utilized by the Gearbox Reliability Collaborative (GRC), a research program led by the National Renewable Energy Laboratory (NREL). Field and dynamometer tests are being performed in order to build up a complete understanding of the behavior of the gearbox. Results from these tests will be used to support the predictions made using our simulation models. The gearbox itself is rated at 750kW and consists of a single planetary gear stage and two parallel helical gear stages.

Four gearbox and drivetrain models of differing complexity were created for this research. All models included flexible shafts and accurate representations of the gears including detailed gear contact models and mesh stiffness. The simplest of the four models included simple bearing models with linear stiffness and no clearance, a rigid planet carrier, and no housing flexibility. The second model was similar, but all of the bearings were replaced by non-linear bearing models incorporating flexible raceways, clearances, and detailed contact mechanics. The third model was more detailed again, this time including a flexible planet carrier as well as the detailed non-linear bearing models. The final model was fully detailed and included flexible housing as well as the non-linear bearings and flexible planet carrier. Fig. 1 shows the fully detailed gearbox and drivetrain model, and Fig. 2 shows the planetary and parallel gear stages inside the detailed gearbox model.

There are many factors in a design that can influence gear life, but a potentially major contributor to poor gear life is high misalignment between meshing gears. The four gearbox models were analyzed under a simulated load of 100-percent torque, and simulated rotor weight acting on the mainshaft and the misalignment of each gear mesh was calculated. Fig. 3 shows an example of deflection analysis using the fully detailed gearbox model in RomaxDesigner.

Analysis results clearly showed that the calculated gear mesh misalignments depended strongly on the amount of detail and flexibility in our gearbox model. Fig. 4 shows the variation of misalignment for each gear mesh. For the sun gear to planet gear mesh, the simplest gearbox model predicts only 50 percent of the misalignment calculated using the fully detailed model. The relationship between these results and the gear tooth load distribution for the sun gear to planet gear mesh is shown in Fig. 5. These results show that the simplest model predicts a good tooth load distribution (i.e. the load is fairly centered on the tooth and well distributed) but the fully detailed model predicts a poor contact pattern with high edge loading.

The impact of this on the wind turbine industry is clear—underestimating gear life at the design stage can lead to gearbox failures later in the field. 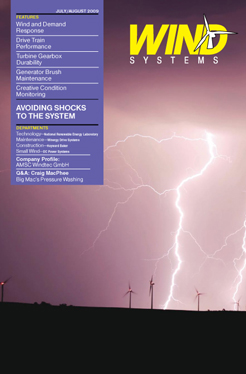 Inspect and Maintain, Refurbish, or Re-blade?

Brushing Up on Turbine Generator Maintenance