As a wind project begins its journey to reality, InEight uses its ability to track and coordinate real-time data to ensure the multi-faceted endeavor is a success from start to finish.

Planning, designing, and constructing a wind farm can be a daunting task, to say the least. Hundreds of constantly moving and shifting parts can make or break a plan, and if that plan fails, millions of dollars can be on the line.

When it comes to ensuring all those moving parts are executed successfully, the experts at InEight have 30 years of experience in making that happen.

“InEight’s focus has always been on taking complex construction projects and applying a disciplined, connected approach to those,” said Brad Barth, chief product officer at InEight. “And that has attracted both owners, who are having to build things, and the contractors that build them. Over the years, some of those customers — which may have started with InEight for more traditional energy projects, like oil and gas — have taken our solution with them as they’ve evolved and transitioned towards renewable energy projects such as wind.”

To get a wind farm up and running, there’s an extensive laundry list of tasks that must be performed and managed including the approval process, permitting, environmental assessments, and more, according to Barth.

Once a project has been approved, InEight’s solutions offer an array of project management capabilities, which allow owners to build schedules and budgets, manage design work, all the way through to issuing contracts for engineering and construction work, which involve multiple stakeholders. According to Barth, the solution offers a collaborative framework for all parties working together, offering all stakeholders increased visibility of project changes. Juggling all the pieces means things often change, so it’s important that InEight’s team is there to make any and all adjustments to keep the project’s momentum going.

“You’re almost like a symphony conductor,” he said. “Somebody’s got to conduct all these different parties. You’re doing the design work; you’re doing the construction work. Another big aspect in wind is the specialized equipment that has to be engineered and procured. You’re not buying concrete pipe or asphalt from an asphalt plant. These things are expensive. You’re buying turbines, for example, and you might buy hundreds of them on a project. And if it’s offshore, then how are we going to get that stuff offshore? We’ve got helicopters and other things. There’s a lot of detail in making sure these projects stay on track.”

By coordinating multiple projects, Barth said there’s an advantage by being able to track what went right and what went wrong while learning from that and setting expectations while better understanding the risks so the next project can improve from that experience.

With supply chain issues being a constant concern, Barth emphasized that his team makes sure there are many different scenarios available to tackle any challenges that might show up.

“You have to have a plan B, because oftentimes your plan A is not working out — whether it’s shortages, logistical challenges, or supply chain challenges,” he said. “You’ve got to have a plan A and a plan B and maybe even a plan C. And sometimes, you execute on both because you can’t take the risk of having one that doesn’t work. It’s a very collaborative approach that we enable, as opposed to, traditionally in construction, it’s a very arm’s length kind of relationship between the owners, engineers, and contractors. With our technology, if there’s a change, your teams go through a change-order process. It’s a very dogmatic approach, but on these wind-farm projects, what we see is you’ve got to react fast. It’s more collaborative, and it’s more iterative, and it’s more transparent.”

With more angles than the sides of a Dungeons and Dragons’ die, InEight handles these plans within plans by dealing with areas Barth calls “siloes.”

“We use the term ‘siloes,’” he said. “That’s where we see these stakeholders, and sometimes even within a stakeholder, there are different roles inside there, and they’ll have their own kind of siloes of data. For example, let’s just take the budget for a project. The owner might have a budget for the project that maybe is fairly high level. And then as they engage different contractors, suppliers, and engineers, they’ll have a more detailed version of their budget that they’re bringing to the table for their scope, and the same goes with the schedule.”

The challenge comes when, for example, a design choice is needed during the engineering work, according to Barth. This could be the nature of the energy collection or maybe even a change in the types of turbines or the number of turbines needed.

“That decision has a ripple effect on everything else,” he said. “What often happens is if you don’t have that visibility and if everybody’s working in their own siloes, you may not realize you’re impacting your construction schedule based on certain design assumptions when those designs change. That does two things: It means that the schedule probably just slipped, because now we have more design work to do, but it also means there are probably different quantities of work that are going to have to be installed and constructed.”

If those factors remain unknown to the project at large, it could mean delays and rising construction costs, according to Barth.

“By bringing all that stuff together, everybody can have their view of their scope and their details, but we bring it together into this one unified view, not only so that you can react easily to changes, but you can also run ‘what if’s,’” he said. “You could say: What if we start to run behind schedule? What if we went to a six-day-a-week schedule instead of five days a week, what would that do? We’re going to pay some overtime, but that shortens the schedule, so the benefit of that might be worth it. Those kinds of ‘what if’s,’ when you’re operating in siloes, that’s hard to do. You can’t do those ‘what if’s’ and see the connections. But in our solution, you can very easily do those ‘what if’ scenarios.”

An important aspect to making sure these projects move as efficiently as possible is being able to gather and track data-driven insights, according to Barth.

“Particularly in the wind sector, it’s really important just because things are changing so rapidly,” he said. “I mean the procurement costs, construction costs, logistical challenges, all that stuff is just in flux partially due to the pandemic and the changes that has brought on the industry. But it’s not just that. Part of it is, but it’s relatively new, and people are reacting and sort of wobbling into best practice and things like that. This data-driven approach allows you to capture lessons learned on every project, so that you get smarter on the next one. And that’s key to setting realistic expectations in the first place. A data-driven approach allows you to, even within a project, as you repeat the work, you get smarter and smarter as you go. So, you can set reasonable expectations, and you can understand risks.”

Being able to track different projects across geographically — and sometimes, geopolitically — diverse areas is an important factor to consider when getting a project up and running, according to Barth.

How much of that is based on civil work, mechanical work, electrical work, instrumentation, components, all that kind of stuff? So, by breaking it down to a detail level, when the next project comes along, some of those details are going to be different. Maybe this is an offshore project, just like the other one, but we’re going to freight the stuff out, not helicopter it. You can make those changes, but still have a nice template and proven list of assumptions. We’re not having to reinvent the wheel every time.”

Barth said he sees InEight’s involvement in wind increasing both on the owner side and the contractor side, which are key customer segments for the company.

“As we always do, when we get feedback from customers in that sector, in terms of what’s working or what’s not working, we will continually innovate on our solutions,” he said. “We do new releases of the software, and we add hundreds of new features into the software every nine weeks. So, we’ve got a large R&D organization that’s continuing to add to the solution, add enhancements, make it better, and deal with some of these real-world issues that are coming up on these projects. We try to be very reactive to that. We’ve been involved in some massive wind projects, and, coming out of that, there has been some great enhancement ideas for the product, and that’ll continue. That’s really our commitment: to continually improve the solution that the owners and the contractors use to manage these wind projects.” 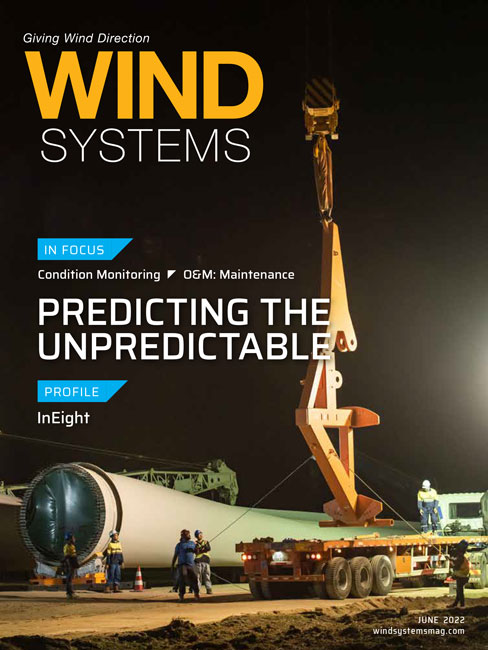