Home inFocus A safer way to look inside the blade

Internal wind-turbine blade inspection using an innovative drone technology can cut inspection time in half, allowing 40 percent more of the blade to be inspected.

Ørsted A/S (formerly DONG Energy) is a Danish multinational power company based in Fredericia, Denmark. It is the largest energy company in the country, and a global leader in promoting practices that are friendly to the environment and designed to help reduce climate change.

Ørsted has investments in a variety of green energy solutions, including:

Wind Power LAB is a Danish company that was founded in Copenhagen in 2016. It delivers automated products and services for the wind-power industry related to blade-defect assessments and blade-risk management. Its goal is to deliver the best available and robust solution for automated blade-defect detection, repair recommendation, and engineering advice.

Together, Ørsted and WindPowerLab have worked to develop, test, and validate an inspection process based on using the Elios 2 for wind-turbine blades.

As with traditional power-generation practices, all of Ørsted’s green-energy operations require regular maintenance.

This means Ørsted must schedule periodic inspections of the different assets it uses in its power-generation work. In wind energy alone, the company owns 600 wind turbines, and each one must be inspected once a year.

A typical internal wind-turbine blade inspection requires an inspector to physically enter the blade. While inside, the inspector collects visual data on the condition of the turbine’s blades.

Each blade has two or more chambers separated by a web. The surface of the blade within these chambers is made of a strong compound of laminated materials glued together, which can present a reflective surface.

Both sides of the blade—or each chamber—must be inspected in order to identify damage from lightning, missing bolts, cracks, or other defects that could compromise the blade’s integrity.

Ørsted planned its test of the Elios 2 for a wind turbine at one of its offshore wind farms.
As part of the test, Ørsted wanted to experiment with attaching a UNISET device on the Elios 2 in order to understand the accuracy of the data captured, as well as the feasibility of putting an additional payload onto the drone.

The UNISET is a device that makes it possible for inspectors to know the exact distance the drone is from it when flying into the blades, which then allows them to determine the precise location of any defects found during the flight.

The four goals for the test were to determine:

Ørsted personnel found the test to be a success on all four fronts. In order to fly the Elios 2 inside the turbine, the drone pilot sat in a hub where all three blades meet. From this hub, a manhole provides access to the chamber that holds the blades. The pilot flew the Elios 2 through the manhole, entering the chamber where the visual data needed to be collected for the turbine inspection. 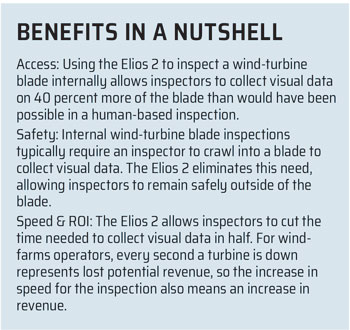 A Note on Data Localization

Instead of using a UNISET payload to pinpoint the location of defects, inspectors of wind turbines can now use Flyability’s Inspector 3.0 software.

Inspector 3.0 allows inspectors to create a sparse point cloud with detailed locational data, which can then be shared with technicians and other project members to pinpoint the exact location of defects found during an inspection mission.

This software was actually tested during the wind-turbine mission and proved useful for localizing defects, along with the UNISET data.

Given the success of the test, Ørsted is exploring the possibility of implementing regular drone inspections for its offshore wind turbines.

It is also looking into other possible drone inspection use cases throughout its green-energy assets, with an eye to helping make its operations safer, more efficient, and more cost effective.

Implementation may take some time, and the actual inspection work may ultimately be performed by third-party contractors hired to do inspections. But the Elios 2’s inspection technology is promising, and could represent significant improvements for internal wind-turbine blade inspections.