Wind energy is both clean and renewable and it helps offset two of the most damaging impacts of conventional electricity generation—air pollution and natural resource depletion. For example, a traditional fossil-fuel plant of the same scale as the recently completed Sheffield Wind project in Vermont’s Northeast Kingdom would burn 61,000 tons of coal or about 221,000 barrels of oil per year.

However, like any other form of development, construction of wind energy facilities does have impacts. As states throughout the U.S. look to expand their renewable energy production capabilities, this article will provide a developer’s perspective on steps to minimize habitat effects by illustrating the importance of considering habitat and wildlife impacts during every step of the development process—from initial planning to erecting turbines to constructing transmission lines.

In addition, for a project to be successful in both the short-term and long-term, it must represent a mutually beneficial partnership with the communities it is located in and with its key stakeholders.  These economic benefits to communities include property tax arrangements, increased income from land leases with local landowners, and increased local business activity to support development, construction and operations.

Minimizing Habitat Impact
As the first developer to build a commercial-scale project in Vermont in decades, First Wind worked hard over many years to develop and build the Sheffield project the right way. In designing and building it, we were highly attentive to protecting the natural resources at the site, and we believe this project is one of the most innovative in the country in taking steps to reduce overall impacts to the natural resources.

Beyond producing clean energy, the Sheffield Wind project has also undertaken several cutting-edge environmental mitigation and conservation measures. One of these measures is an intricate system of storm water ditches, which transport runoff from the roads to 27 basins designed to clean storm water and return it to the local habitat.  During the development and planning of the project, the potential wetland impacts were minimized to less than a 1/10th of an acre), while the footprint of the project was shrunk. These reductions in impacts occurred due to multiple redesigns and the construction of two bridges which spanned higher elevation streams.

The reduced footprint took special care to recognize and protect the natural water resources wherever possible near the proposed project. It has been a highly successful effort.

The project also features narrower roads and smaller turbine pads than most utility-scale wind projects. In previous wind project construction jobs, the crews cleared large areas for the turbine pads, so as to raise the blades into the turbine. But at Sheffield, smaller areas were cleared and blades poked into the forest. This meant that acres of forest were not impacted when they might have otherwise been impacted.

In addition, other efforts were made to protect local wildlife—including bear and moose habitats. In fact, all of the bear habitat was identified pre-construction through mapping trees which had bear scratch marks. This habitat was subsequently avoided by the project.  Similarly, a large area that is known to provide important moose habitat was avoided.

In an effort to protect wildlife and habitat for animals in the area, in cooperation with the landowner, 2,700 acres of land surrounding and including the project were set aside and will be conserved for the life of the project. As a result of these efforts, a large tract of undeveloped land around and including the project is preserved as critical habitat for several large mammals that are frequently observed near the turbines. Figure 1

Measuring Environmental Impacts
Sheffield Wind was the first utility-scale wind project in Vermont to go online since Searsburg in 1996. The project was able to move forward in large part due to agreements established with the state and federal regulators, as well as partnerships with Vermont-based utilities.

These agreements with state and federal environmental regulators resulted in the many mitigation measures, and included several operational studies to measure water quality, sound output and impacts to birds and bats.

First Wind also agreed to partner with state, federal and non-profit bat experts to study the efficacy of curtailing turbines in reducing bat fatalities. As a result of this partnership, a two-year bat curtailment study was conducted by Bat Conservation International at the site in 2012 and 2013.
This study will likely be published and used to set the standards for curtailment to reduce bat fatalities at this site and others.

Since the project began operating on October 19, 2011, it has  generated enough clean, renewable electricity for the equivalent of 14,000 homes in Vermont with no associated emissions or pollution.

For the duration of the contract, the project’s host community, the Town of Sheffield, will receive $520,000 annually, which can be used to lower taxes or toward local services including roads, schools, police, firefighters and more.  In total, including payments and services for land, property and state taxes, and local maintenance contracts, about $1 million a year will be paid into Vermont for the life of the project.

As Vermont continues to diversify its energy supply, we believe that wind power should be an important part of the mix.  No wind project or site is alike, so when approaching new projects, it is important that developers always consider how to balance the impacts instead of taking a one-size-fits-all approach. Careful siting and community-focused development are key to striking that balance to ensure that Vermont wind power provides long-term benefits to future generation of Vermonters. 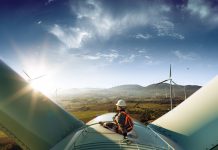