The share purchase agreement was announced in Washington, D.C., in connection with U.S. Secretary of State John Kerry’s Climate and Clean Energy Investment Forum and builds on a long-standing relationship between Google and Vestas, which also includes the 270 MW Alta Wind Energy Centre in southern California and the powering of a Google data center in Finland.

The Lake Turkana Wind Park is expected to be one of the most efficient wind parks in the world, and have an annual power production of more than 1,400 GWh, which will provide around 15 percent of Kenya’s electricity needs based on current generation capacity. The wind park is owned by Lake Turkana Wind Power and is key to Kenya’s development goals and a prime example of wind energy’s ability to create sustainable development across the globe.

Google’s investment is a leading example of companies investing in wind energy globally to achieve attractive financial returns and scale the deployment of renewable energy. This trend shows that whether a company is looking to power one’s own operations, reduce supply risk and price volatility, or contribute to combatting climate change, investing in wind energy makes economic sense.

“We are making a commitment to invest in Lake Turkana because it makes financial sense, but also because it has the potential to have a massive impact on Kenya’s grid, helping to spur the deployment of renewable energy in one of the world’s fastest-growing countries,” said John Woolard, vice president of energy at Google. “We look forward to joining Vestas and others to help accelerate progress toward a future of clean energy in Kenya.”

“We commend Lake Turkana Wind Power for their ground-breaking work in bringing the project to this stage,” said Vestas Group President and CEO Anders Runevad. “We are extremely proud to provide the technology and service for a project that will be one of the most efficient wind parks in the world and which upon completion will include Google among its investors.”

Google’s investment in the Lake Turkana wind project will be its 22nd renewable energy project investment overall and second in Africa. Vestas will retain its equity stake in the project until its completion in 2017, upon which Google will formally join the Lake Turkana Wind Power investor group. 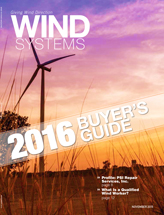 Taking a cue from nature