The progressive, forward-thinking renewable-energy sector resonates with women and represents the future of energy-sector jobs.

It’s no secret that renewable energy is a rapidly growing market. With more than 250,000 expected new jobs in renewables by 2020 in the U.S. alone, the energy industry is seeing both men and women choosing this field over the more traditional energy fields.

The idea of playing a leading role, and being at the forefront of a ground-breaking industry, is attractive for many, particularly graduate-engineering candidates. Renewable energy is a fast-changing and diverse sector consisting of a variety of technologies in constant evolution, such as solar PV, onshore and offshore wind, and energy storage. The industry has earned a reputation of being forward-thinking and often initiates more modern business practices within the workplace. The renewables industry provides professionals with the chance to be involved in some of the most diverse and innovative engineering projects in the world.

For the renewables industry to truly prosper, however, energy workers with the relevant skillsets and experience will need to be mobilized to the right worksite locations. In addition, the renewables talent pools, particularly in booming sectors such as wind and solar, will need to be quickly established and retained.

The Women in Energy Global Study, a recent study by NES Global Talent, a leader in engineering and technical recruitment services, found that one potential talent pool the renewables industry should vigorously tap into is female engineers. Women are changing the future of the energy industry and in order for the sector to continue to thrive, employers must promote an environment of inclusiveness and diversity within the workplace.

A total of 1,200 female professionals participated in the online survey, which ran for one month in the second half of 2018. NES Global Talent and its research partner, Energy Jobline, then analyzed the results, identifying key trends and statistics of women in the energy sector’s workforce.

The study provides breakthrough insights into the female workforce and what women look for in an employer, as well as clear data around trending subjects within the gender diversity topic, such as mentoring, “pink vs. blue jobs,” flexible work schedules, and inclusiveness. The data within these themes can aid hiring managers and organizations within the renewable energy sector to successfully implement invaluable support for female professionals. 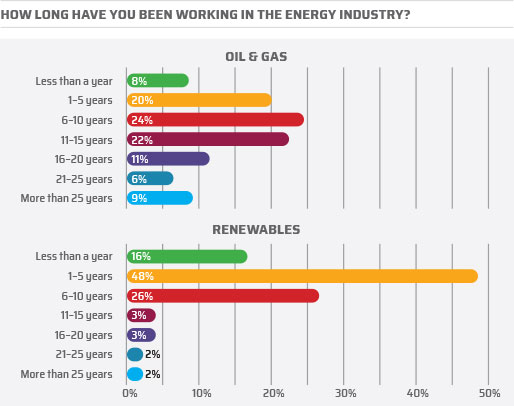 The energy sector is still behind in closing the gender gap that remains across all markets. Women in energy continue to face challenges such as male-dominated environments, a lack of work-life balance, and an absence of female mentors. As the gender diversity topic gains more momentum and more energy companies implement diversity initiatives, the study provides insight on the industry’s progress to-date.

Globally, the strongest energy sector for female representation was the oil and gas sector at 85 percent. When looking at experience, the renewables sector had the best representation of women, with 63 percent of those being less than five years into their career. Additionally, more than 100,000 people work in the wind-energy field, with women making up roughly 32 percent of this figure, which has increased from 20 percent just five years ago. Thus, the renewable energy sector is currently triumphant in growing the future female workforce.

The modernistic nature of renewables, as well as its strong advantage of being environmentally-friendly, seems to be resonating with women who are in the infancy of their careers — the future leaders of the energy sector. Experienced females tend to be working in oil and gas, which will be widely due to the sector itself having had decades of activity.

The renewable energy sector is growing rapidly and is seen as a secure industry of the future. NES Global Talent’s research shows that inexperienced professionals favor renewables because they see it as stable, forward-thinking, and welcoming.

A common stereotype is that women who work in energy only hold support roles, such as administration and human resources. Discrediting this theory, the Women in Energy Global Study shows engineering as the most common job type at 31 percent for all energy sectors and 39 percent for renewables. This means more women are specializing in STEM subjects and qualifying in engineering fields such as wind energy. Only one-fifth of respondents claimed to specialize in “pink jobs.”

Research shows the presence of women in the workplace improves perceptiveness and decision-making processes, both crucial to the renewables and wind-energy fields. A higher volume of women working in leadership roles in the energy industry will continue to pave the way for greater gender equality.

The gender pay gap is still a huge issue for working women, as well as the ability to achieve a healthy work-life balance. For women in energy, the common assumption that men are the big earners is counteracted, as 63 percent of survey respondents were the bread-winners in their households. This number tends to be slightly higher in oil and gas at 66 percent than in renewables at 55 percent.

Additionally, nearly half (44 percent) of those who claimed to be the primary wage earner in their family had children. The infancy of the female renewables workforce is likely to have contributed to only a third of the sector having children.

Furthermore, the U.S. contained the highest number of female professionals that were also parents at 55 percent, whereas the U.K. came in at 40 percent. The U.S. is often ahead of the game when it comes to employment change, which suggests the country is also advanced in establishing flexible working opportunities for parents.

Despite popular belief, the NES study shows that working in the energy sector fails to deter women from having children, as 30 percent of females with up to five years of experience in energy have kids. This data confirms a career in energy can offer a viable work-life balance. 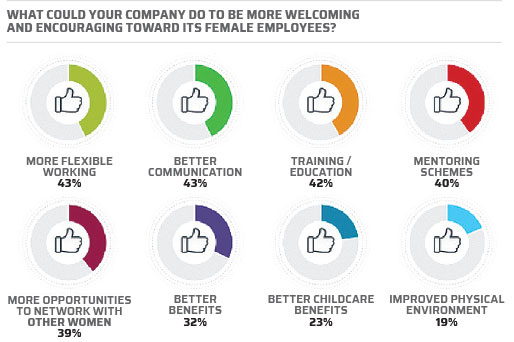 With a male-dominated workforce and lack of female inspiration, a strong company culture should be a prime focus for renewable companies. When asked what their current company could do to be more welcoming and encouraging to women, 43 percent of respondents cited “more flexible working” and “better communication” as their top criteria. This was closely followed by “training/education” at 42 percent and “mentoring schemes” at 40 percent. Positively, nearly half of women in all energy sectors felt their company was inclusive or very inclusive, with renewables ranked at 43 percent.

The energy industry presents many workplace challenges to women, but which challenge is the most significant obstacle? If employers can address this challenge, retaining their female workforce becomes an easier task. The study’s respondents cited a lack of suitable roles at 31 percent as their biggest challenge working in the energy sector. This suggests acceptable roles are few and far between.

Company benefits are an important consideration for attracting and retaining female employees into the under-skilled energy workforce. For a renewables company to improve its gender diversity, its employee benefits must match women’s needs. “Flexible working” was considered the most necessary benefit at 66 percent, closely followed by “remote access” at 60 percent. Access to female networks and enhanced maternity leave also receive strong rankings at 43 percent and 44 percent. Again, female professionals desire to achieve a healthy work-life balance, especially those with children.

Planning for the future

With a skills shortage looming, the industry must consider where female professionals will be in the future. The study shows a keen interest in other engineering sectors, with 55 percent of respondents stated having considered a move. Among the alternative engineering markets, construction and infrastructure had the biggest draw of female interest at 28 percent and 22 percent.

Yet, 84 percent of women said they would encourage a female friend to pursue a career in energy. This signifies that hiring managers’ most successful means of attracting new talent will likely be referral schemes, as incentivized referrals are often an incredibly useful way of widening the candidate pool.

Additionally, 15 percent more women with children (than not) are thinking of leaving the sector, but would recommend it to a friend, suggesting the struggle to balance childcare with a career in energy could play a part in women wanting to leave the sector. Also, the lack of flexibility offered in the workplace can sometimes lead to financial strain in which women are forced to exit the market or scale back hours.

To better improve the relationship between employers and employees, the study investigated the options women place the most emphasis on when considering a new role. The survey showed that women value their ‘career development’ at 31 percent over “salary” at 14 percent. “Job security” was slightly more valued, but “career development” prevails by a considerable amount.

Without a doubt, women are making a huge impact on the energy industry. Younger sectors, such as renewable energy, are rounding up the female troops to provide for the future energy workforce, while the oil and gas sector offers strength in numbers. Women want to feel welcome in an industry, and the progressive, forward-thinking renewables sector resonates with them.

A common theme among women in the renewable energy market is that they are all pioneers, working to build gender equality in a male-dominated industry. Renewable energy companies should continue to strive for inclusivity, female mentorship, equal pay and a healthy work-life balance in order to attract and retain women in the workplace. This will help ensure the sector’s advancement and long-term success within the energy industry.

The Business Value of Digitalization

The state of the art of gearboxes

Unforeseen subsurface conditions: Mitigating the risks of what can’t be seen