The winds of change have definitely been blowing at Consulting Engineers Group (CEG). A wholly owned subsidiary of Dakota Electric Association that provides high-quality, high-tech transmission and distribution engineering to the utility market, CEG has turned its attention to the burgeoning wind power market over the past five years, focusing on design and build work for wind farms in particular.

“It is far and away our biggest area of growth,” according to Vince Granquist, a vice president and senior project engineer with the Minnesota-based firm. “At this point it’s probably more than 75 percent of the company’s focus.”

Asked how this came about, Granquist says “I happened to see that a wind turbine was planned for Carleton College, which is a private liberal arts college in Northfield, Minnesota. I live in Northfield and know these people. Once we got interested in that project it kind of snowballed as we talked to other people building other small wind-related projects in Southwestern Minnesota.”

Critical Component
Once CEG began its journey down the wind farm road it gained valuable expertise that could only be acquired through firsthand experience. A key finding of CEG engineers is that designing and installing collection systems—including the 35kV cable portion, the substations, and the transmission line work that accompanies it—is one of the most critical aspects of a wind farm project. To support this function CEG purchases hundreds of thousands of feet of 35kV TRXLP underground cable. Although the cable is a critical component of the system, it is a standard utility product that is used to connect the turbines, both to each other and back to the substation.

Given that this cable is viewed as a commodity, there are numerous reputable suppliers capable of providing a reliable product. Regardless of whether the end product is a cutting-edge wind farm or a traditional electric facility, the standard utility cable will do the trick. But how does a company determine which supplier is best? One thing that Granquist knows for certain is that while pricing is important, it is by no means a “make or break” purchasing parameter.

“Certainly you’re always looking for the best price possible to lower total project cost,” he says. “For a typical 100-megawatt wind-farm you can be talking about a million dollars worth of underground cable, so the pricing difference between two suppliers can be noticeable. On the other hand, for a 100-megawatt wind farm there’s going to be about eight million dollars in total electrical work, so the decision is not entirely price-sensitive. The level of service matters much more than another tenth of a cent reduction in product price.”

Value-Added Vendor
Back in 2005, a time in which CEG was relatively satisfied with its cable supplier, Granquist became familiar with Hendrix Wire & Cable, an MV Underground Cable business. Hendrix’s local representative, Chuck Healy of ElectroTech, Inc., began talking with CEG and asked that they listen to what Hendrix had to offer. Feeling that Hendrix might be a good fit with CEG, Granquist agreed, and found himself pleased with the quality and pricing of Hendrix’s 35kV cable. What’s more, Hendrix was excited about the prospect of bringing on another wind-farm customer. The first purchase order from CEG came in June 2006, and Hendrix eventually began providing two value-added services to its customer: “Bill and Hold,” and “Capacity Planning.”

Quite simply, Bill and Hold is a means of adjusting for the uncertainty in project lead times versus cable lead times. “Hendrix builds the cable based on the scheduling needs of a given project,” Granquist says, “and then the company holds the cable on-site at no charge for an agreed upon timeframe. This program has provided CEG the certainty of cable availability combined with the flexibility to react to unplanned events.”

This option gives CEG the ability to work within its clients’ production schedules, which are often erratic at best, by providing what is essentially “just in time” delivery of the cable to the jobsite when the time is right. And not just in terms of actual installation, but ensuring that someone is at the site to take delivery.

“Cable manufacturing will consume a fixed amount of plant production time from when you issue a purchase order,” Granquist explains. “You usually issue a purchase order with a ‘notice to proceed’ contract, but without necessarily having everything nailed down as to when work will begin at the site. It becomes necessary to get the cable on order with the distinct possibility that even though the cable is ready, the site won’t actually be available until the following month. In some cases the delay may be as much as two months.”

The typical process would call for the vendor to manufacture the cable and deliver it to the jobsite, despite the fact that the site might be unprepared and nothing but a cornfield. This would require companies like CEG to make alternative storage arrangements. Furthermore, it means locating someone with equipment capable of unloading and moving thousands of pounds of cable. In this case the cable could sit for a month or more at the jobsite with no one to watch over it, exposed to damage or theft.

“Delivering the cable directly to CEG’s offices would be a possibility, but it would have to be moved a second time to the job site,” he adds. “Few people want to pick up and handle cable twice, incurring further cost.”

Overcoming Uncertainties
Capacity Planning is another service that provides CEG with a greater measure of control over the sometimes uncontrollable scheduling of wind farm projects. This option provides CEG with access to the Hendrix production schedule on a regular basis, allowing it to modify items and quantities to respond to multiple wind projects in development.

“If I suspect that a few projects are likely to be released over the course of the summer and fall, I can work out what I think might be the basic cable order, even if the projects aren’t definite,” Granquist says. “I can say to Hendrix, ‘from a capacity planning point of view, plan on taking up a couple of slots in late July to deliver cable to me in early August, and I will confirm it on June 1.’ That way Hendrix can have an idea of what CEG needs for possible production. In the event that one of those slots doesn’t work out, we have at least established a ‘fish or cut bait’ date so that it doesn’t become an economic problem for Hendrix. We essentially needed a procedure to address the fact that we know we’re going to do something, but frankly until people stop moving turbines and tell us to go ahead we don’t know exactly what. So a vendor with flexibility, in terms of how we fit things through their system and get it out the other side, is extremely useful.”

These two programs—along with the consistent quality of the cable and the ability to produce specific lengths with virtually no overage costs—have helped Hendrix and CEG forge a mutually beneficial partnership. Hendrix’s knowledge of the wind farm market and the challenges faced on the jobsite is an advantage that can’t be overstated.

“Most of the firms that supplied primary cable to the electric utilities now supply it to the wind farm industry as well,” Granquist observes, “but it helps that Hendrix has been doing it long enough that we can have shorter, more-productive conversations. We no longer have to work through the same issues over and over again. They know how the wind-power industry works in terms of the cable requirements that are unique to an industry whose projects are out in the middle of nowhere and released on a variable schedule. That’s pretty handy to have.”

Conclusion
In the end, CEG and Hendrix have both gained insights into each other’s world. CEG has learned about cable manufacturing, and Hendrix has become more knowledgeable about wind power project management. Through this close-knit relationship, both companies have crafted a unique approach to serving the wind power market. 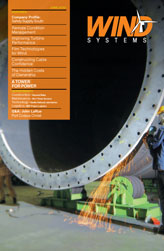