Those three words sum up what Bachmann electronic GmbH brings to the table in the competitive wind-energy game, according to Brian Hill, general manager — North America for Bachmann.

“Across the board for Bachmann, what really differentiates us from our competitors is our quality,” he said. “That really is a huge focus for Bachmann.”

The wind-turbine controller is, for all intents and purposes, the brain of a turbine. Without a properly functioning controller, the turbine will never be able to deliver power correctly.

Those controllers are a large part of Bachmann’s slice of the wind sector.

When it first entered the wind sector more than 20 years ago, Bachmann supplied controllers to GE.

“About 19,000 GE turbines have Bachmann controllers, and we have since become the No. 1 independent controls manufacturer in the wind space,” Hill said. “About 65 percent of Bachmann’s business is now in the wind sector.”

And even though GE recently began manufacturing its own controllers, Bachmann is still a major supplier of controllers to wind companies such as Suzlon, Acciona, Inox Wind in India, as well as several turbine manufacturers in China, according to Hill. 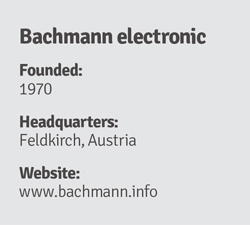 “The number of hardware and software platforms that can be utilized are pretty extensive,” Hill said. “We also have a proprietary communication protocol that allows for very quick communication of large amounts of data, which is becoming more and more in need as these wind parks try to communicate with the grid and respond to the demands of the grid operator. That’s obviously a unique feature as well. That’s our bluecom communication protocol.”

And every module that leaves the Bachmann factory has gone through extensive testing. Whereas other companies may only test a random fraction of products, Bachmann tests every one, according to Hill.

“Our controllers are basically in operation as they go through vibration and environmental testing,” Hill said. “Every one before it leaves has gone through this extensive 48-hour testing. We have a very low rate of failure, so we can really stand behind the product. That quality piece is the hallmark for Bachmann.”

That sums up the quality, but flexibility also is a big part of the Bachmann brand.

“Every module we put out is backward compatible with any of the previous operating parameters that we’ve done,” Hill said. “We service and repair any modules that have problems. We’re now in the wind business 20 years, and a Bachmann module that went into a GE turbine in the early ’90s can be plugged into a brand-new controller string. Each specific function, if there’s a problem with it, can be taken out and replaced instead of having to replace the whole controller string. It allows for expansion of I/O and a lot of flexibility.”

And as Bachmann’s customers face a rapidly changing market that can include grid changes and other new requirements that aren’t grandfathered in, flexibility and adaptability are key, according to Hill.

It’s important to be able to listen carefully to customers in order to assess what their needs may be, because not every need is the same, he said.

“Listening is a very important part in getting to the bottom of those issues,” Hill said. “We’ve come up with custom solutions for some of the big players in the industry to adapt that communication with the grid operator.”

Recently, that Bachmann expertise was able to solve a problem for a wind farm in Texas, in ERCOT territory, according to Hill.

The older turbines and park controller at the site could only provide low resolution frequency on 1-minute averages, but the new grid requirements demanded that information be recorded in Milo hertz resolution in 1-second averages and one year of data be stored.

“The wind-farm owners presented this grid requirement to one of the big OEMs,” Hill said. “It was their turbines and controls, and they went to them first. And they said, ‘sorry, you’re on your own.’”

And there was no way these turbines would be able to comply with those new requirements as originally designed, he said.

“We were able to put in this small PLC — our grid monitoring data unit — and be able to provide that information to ERCOT and basically keep it on the grid,” Hill said. “The important thing for us is listening to what it is the customer is trying to get to. And that may be adapting a solution we already have or creating a new one that meets their needs.”

With more older turbines needing to be re-powered and retrofitted over the coming years, Bachmann is set to play a huge part in that thanks to the modularity in its product line, according to Hill.

“I think Bachmann also will have a good percentage of the new turbines coming out because of that flexibility that we have across that whole automation part of wind,” he said. “Being able to provide a high-quality, long-life product is the key to this business. Some of these older turbines aren’t able to meet the changing rules of the business. But if you have an adaptable product like ours — and we don’t really know what the future will hold on some of these things — we’re confident that we can help our customers meet those unforeseen changes that are coming.”

And some of that flexibility is seeing Bachmann come full circle with one of the companies that it started with: GE.

“With GE now offering retrofit repowering of those older 1.5 MW turbines that have our controls in them,  even though we’re no longer their OEM controls provider, they’re buying upgraded Bachmann PLCs with more memory to adapt to their solutions,” Hill said.

Bachmann’s adaptability applies because it prevents GE from having to put in a whole new controller system, according to Hill.

“Here, they’re adding more sophistication, but they can leave all the older modules that handle the data and the communications and all the other parts of the automation system in place, and just change out the PLC,” he said. “So, last year GE became our largest customer again even though we’re not their OEM controls supplier anymore.”

Bachmann has been a major player in the wind industry for close to 20 years, but the company started life almost 50 years ago with automation in the industrial sector dealing with plastics manufacturing, according to Hill.

Now that a majority of what Bachmann does is in wind, the sheer numbers speak for themselves.

“We have over 100,000 wind turbines in the world with Bachmann controllers and an additional 9,000 condition monitoring systems in place,” Hill said.

It’s that kind of visibility in the industry that Bachmann will demonstrate at the AWEA WINDPOWER show in Chicago in May.

“We’ll have all our major product lines shown,” Hill said. “We’ll be able to demonstrate our SCADA solutions and our retrofit of older turbines all across our product line. And we’ll be happy to speak to them about their customer needs.”