For decades, The Timken Company has been a global leader in bearings and mechanical power transmission, continually improving performance, reliability, and efficiency.

Products made by The Timken Company have powered many of the world’s largest wind turbines, traveled to Mars with the Curiosity rover, and supported drilling of the world’s longest rail tunnel.

But when all is said and done, it’s not about what Timken makes; it’s about the know-how that goes into making it.

“We make it about our knowledge and not just about our bearings,” said Richard Brooks, manager — energy markets with Timken. “We are an engineering company, and you see our know-how and innovation in our products.”

Brooks is responsible for Timken’s energy businesses including bearings and related products for wind-turbine maintenance and reliability.

Although Timken and its subsidiaries have a hand in many different industries, it’s in wind that it has found a simpatico business relationship.

“Wind is an ideal market for us essentially because it matches the types of markets that have high-demand, challenging applications,” Brooks said. “The forces involved in wind are pretty spectacular. They need high reliability because these things are operating by themselves, hundreds of feet in the air, and repairs are expensive. Our goal in wind is continuing to grow and maintain our position as a major supplier for new turbines, as well as their key system sub suppliers like gearbox suppliers.”

Over the past eight years, Timken has acquired about a dozen businesses that deal with well-known brands that include related products and services, according to Brooks.

“About half of these have some play in wind energy,” he said. 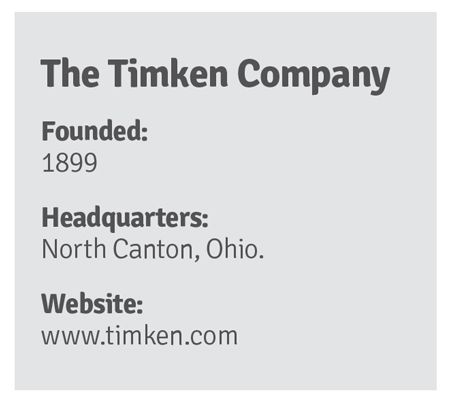 The remainder of that is the aftermarket where distribution of services comes into play, Brooks said.

Energy makes up about 9 percent of those total markets.

“About half of that energy space is wind,” Brooks said. “It’s the largest of the energy segments and the most rapidly growing.”

All of those industries give Timken a global footprint among 28 countries, 57 sales offices, and 75 plants and service centers, but it still remains a major North American-based bearing company.

Roughly 60 percent of Timken’s business is in North America.

So it’s easy to see just how Timken’s products and services have stretched around the world, according to Brooks.

“We’ve grown globally, over the last two decades,” he said. “We really expanded throughout the world, growing in Latin America, Europe, and Asia.

The core of Timken’s business has always been engineered bearings, according to Brooks.

But Timken has been expanding into mechanical power transmissions and industrial services surrounding that drive train.

“We’re looking to grow what we do, still focusing on the challenging part of the drivetrain but adding on couplings or lubrication systems or other services,” Brooks said.

Relationship With The Wind Owners

When it comes to the wind industry, Timken maintains a constant relationship with the actual wind owners, he said.

“In addition to working a lot with turbine builders and gearbox builders, we have very close relationships with turbine owners,” Brooks said. “All those really big end users who own thousands of these turbines have learned a lot in the last 15 years. It’s still a new industry in many ways, and, therefore, there are a lot of problems with some of the existing turbines where we can bring our technology to bear. We’ve had a very collaborative effort with a lot of these end users to take the technology and the higher end products that we have, figure out where they’re having problems, and solve those problems.”

That technology is responsible for several new innovations that Timken plans to unveil this year.

“We have a new grease for main bearings that’s launching this fall,” Brooks said. “We’ve been a little bit cautious in bringing on a grease in wind like we have in many other industries simply because we wanted to make sure it met the needs of the market.”

“There’s a common phenomenon where, instead of the electric current going where it’s supposed to, it ends up going through the bearings and damaging them,” he said. “So we have a new line of generator bearings that are electrically isolated.”

Brooks said in the last year Timken released a new main bearing design — called a TDI — that is designed to solve a lot of problems in many common turbine models.

The design is already being used in specific turbines, and Timken is looking to broaden that offering to even more assets, he said.

From Kilowatts to Megawatts

An example of these turbine problems Timken’s new design should correct stems from when the industry began to grow from kilowatts to megawatts.

“Essentially, what they did is they took the existing designs that worked pretty well at 150 feet and 500 kW and scaled them up to 300 feet in the air at 2 MW,” Brooks said. “The forces involved caused a lot of application problems that were not foreseen.”

A typical design for a 1- to 2-MW turbine uses a spherical roller bearing in its main shaft for the main rotor bearing, which is the bearing that sits right behind the blade and supports both the weight of the blade as well as the thrust from the wind, according to Brooks. That spherical roller bearing can handle the weight, but dealing with the wind thrust proved difficult.

“So working with those end users, we learned that they’ve seen poor performance,” he said. “The turbines were failing long before they were expected to. They wanted them to last 25 years, and they’re having to replace them at eight years. And the real problem is that, although that bearing may be a $20,000 bearing, you have to bring in a quarter-million dollar crane to replace that $20,000 bearing. So it’s pretty much a disaster on their operating budget.” 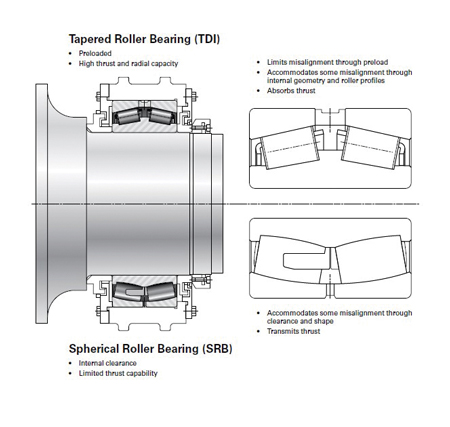 To help solve that problem, Brooks said Timken has come up with two different upgraded offerings for that spherical roller bearing.

One of those options is an upgraded spherical roller bearing equipped with a diamond-like carbon coating that can reduce specific problems and extend the life of the asset, he said.

“The other would be this TDI that I mentioned where we’re basically completely redesigning it and replacing the spherical roller bearing with a tapered roller bearing,” Brooks said.

Timken is constantly striving to stay at the forefront of technology in order to maintain operational excellence for industries that are used to working in extreme harsh environments.

“The Mars rover is a great example where it’s a pretty extreme application. And talk about reliability — it’s got to operate for years in a place where no human will ever see it again. That’s about as extreme as you can get from the reliability side of things,” Brooks said. “Along similar lines are offshore wind turbines. We are involved with most of the wind turbines in the world to one extent or another. So wind is a great example of how we showcase what we do.”

Timken has been able to take its decades-long history with dealing with materials and combine it with innovation and apply it to the wind industry.

“One of the areas where we’re leading the industry, specific to

gearboxes, would be our history with steel and material science,” Brooks said. “The way we’ve innovated in the gearbox side of things is taking that materials knowledge and materials science and applying it to the problems that the industry has been seeing in gearboxes and bringing in better-made bearings with better materials to combat a lot of the existing problems in the field. We’re one of the leaders in working with the gearbox builders as well as the turbine builders to apply these better technologies and higher quality materials to gearboxes to design out the problems that they’re having.”

But that history of knowledge is only part of the equation. Another is Timken’s hands-on collaboration with its end users, according to Brooks.

“We’ve got technicians in their turbines every day, trying to figure out what’s wrong, and then working with their engineering teams to say, ‘OK, you’ve got problems here; let’s fix it,’” he said. “Let’s just not keep replacing that bad bearing; let’s replace it with a better bearing that’s not going to fail next time. And that collaborative process differentiates us as well.”

Even with all the growth and advancement Timken has experienced, Brooks said the company still prides itself as a family environment.

“Our story began with Henry Timken back in the 1890s,” he said. “And even though we’re a publicly traded company, we have fifth-generation members of the Timken family still involved with the company. It’s kind of interesting in that you get the best of both worlds being a part of a large publicly traded company but still having that family sort of feel to it.”