How did you come to co-found Southwest Windpower?

Well, I was living on a ranch that was pretty remote, and I was looking for an energy source. I met this guy named David Calley who’d designed a really interesting small wind turbine, and I was impressed with it. So we joined forces and founded the company in 1987 because we saw a need for a small battery charging wind generator that complements photovoltaics in supplying energy to rural areas. At first we were just thinking about remote locations here in the United States, but as I learned more about both wind power and energy resources we quickly realized how helpful this technology would be to communities in need of clean, sustainable energy around the world.

In order to grow the company and continue developing our turbine designs we began working with the U.S. Small Business Administration (SBA), which has some great resources for smaller companies that don’t have a lot of money to spend in the early stages. With their assistance we were able to develop our Skystream turbine, which really is an amazing piece of equipment. We also joined the American Wind Energy Association (AWEA) and became pretty active in supporting the industry and helping spread the word about wind power. I became something of an advocate, in fact, and was eventually named chair of AWEA’s Small Wind Committee. I began traveling a lot, too, and so far I’ve visited more than 70 countries helping educate people about the benefits of harnessing the wind, at the same time identifying distributors to make this technology available at the local level.

Did this work pave the way to your recent appointment to the U.S. Department of Commerce’s Renewable Energy and Energy Efficiency Advisory Committee (RE&EEAC)?

I’m sure it played a role, especially since I’m such a fan of the SBA and benefited from my involvement with them and other governmental agencies. But I saw it as an opportunity to help achieve a number of goals that will benefit the wind industry at large. As I see it our mission on the committee is twofold. Back in the eighties, before the standards we have today had been established, there were a lot of products on the market that didn’t quite live up to their claims or meet the needs of the end user. Not to cast aspersion on anybody, but manufacturers need to have benchmarks in place to level the playing field, and also to protect customers. So the continued development of standards for the turbines developed for small and community wind is one of our priorities.

The other is directly connected to this standardization of the products we’re manufacturing here in the U.S. but it has more of an economic thrust. We want to continue educating people around the world about the benefits of utilizing renewable energy sources such as wind, so we need to make sure that the products we’re providing to them actually work. They’ve got to be reliable, simple to set up, operate, and maintain, and also to produce the expected energy volume. I don’t think a lot of people here in the States realize that a vast number of countries use fossil fuel to generate the electricity they need, so they’re victims of the highly variable prices associated with those sources. Helping them break that grip will lead to more stable economies and a whole host of related benefits that don’t have a negative impact on their surrounding environment.

We also want to make sure that the types of wind turbines we design are suited to the location in which they’ll be operating. So we’ll be focusing on education, quality, safety, and building on our U.S. export capacity. I’m really honored to have this opportunity to share what I’ve learned about wind energy over the past 25 years to the benefit of the industry both here and abroad, and also to be able to work with such an accomplished and knowledgeable group of individuals. There are 29 people on the committee representing U.S.-based companies, trade associations, and private-sector organizations, so I’m looking forward to learning from them as well. 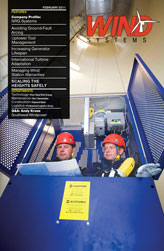