The wind energy market has grown dramatically in recent years, with generating capacity in Germany alone increasing from about 1000MW in 2000 to more than 27,000MW in 2010 [1]. This growth has been accompanied by the use of ever-larger rotor blades [2]. The powers given in Figure 1 are not average power values but rather indicate the maximum size of the wind turbines.

Figure 2 shows the structure of modern rotor blades. A distinction is made between non-structural and structural bonded joints, with the majority of rotor blade manufacturers using rotor blade designs with a structurally bonded joint between the blade shells with integrated spar caps and the shear web, resulting in an “I-beam section.”

The second design variant has no structural load carrying bond lines. An integral manufactured composite structure takes the loads and the bond line has only to transfer the aerodynamical loads in this structure. The mechanical requirements for an adhesive joint in the “I-beam” construction tend to be higher, as failure of the bonded joint would have a significant effect upon the structural integrity of the blade.

Methods for Testing Components
Rotor blades typically require certification in accordance with the current IEC standard 61400 and related regulations; e.g. Germanischer Lloyd [3]. The certification is based on static and dynamic material tests, and a full-scale static blade test. Actual stresses in the bond-line—due to stress concentrations and manufacturing variability, for example—are not directly measured in the full-scale blade test. Without a direct measurement, a large safety factor is assumed to minimize risks in the structural bondlines. For example, Germanischer Lloyd (GL) [3] allows maximum shear loads of 7 N/ mm2 for static loads, yet typical adhesives attain shear strengths of 40 N/mm2 to 50 N/mm2. Over 1,000,000 cycles of simulated dynamic fatigue loading, GL specifies a shear stress below 1N/mm2.

Rotor blade manufacturers, material suppliers, and European research organizations have recognized that there is room between these two extremes for enhancing our understanding of materials and structures. This would allow the reliability of rotor blades to be increased, further optimization of blade designs, and/or reductions in material use. Figure 4 compares the advantages and disadvantages of the test scales shown in Figure 3. The ability to determine SN- lines for structures and study the effect of production faults, material variations, and design adaptations have enormous potential for improving the reliability of bonded joints for rotor blades.

Even though rotor blades are amongst the largest integral fiber composite components that are produced, there are distinct regions of the structure and design that have close similarity. These are, for example: a) rotor blade end section; b) leading edge; c) flange-web design (ply drops in the flanges, flange-web bonded joints); d) sandwich structures, and; e) blade connections (the only blade components currently tested in component tests).

Besides these regions of rotor blades, some of which have to bear very high loads, there are geometrically complex areas of the blade root that are often subject to relatively small loads (Figure 5). Due to the load bearing function of the flange-web joint and the instances of failure and damage observed in operation, this region was chosen in a project between Henkel AG & Co. KgaA, Fraunhofer IWES, as well as in the UpWind project.

Stresses on Bonded Joints
As part of the OPTIMAT project, T. Philippidis published a report [5] about the loads on a 35 m rotor blade and determined the loads using an experimentally validated FE model. Using this model it is possible to estimate the stresses on the bonded blade joint. For a flange-web joint width between 100 mm and 250 mm a shear stress between 0.825 N/mm2 and 0.33 N/mm2 is calculated for the blade radius 5 m. The corresponding axial strain is 0.25 percent. Axial stress thus dominates the load on a bonded joint (Figure 6).

Based on these loads, Henkel and Fraunhofer IWES together developed a representative test specimen whose structure is in principle similar to a rotor blade (Figure 6) and induces comparable mechanical stress in the adhesive. One of the test specimen geometries was also used in the EU funded UpWind project [3] because this gave a more realistic state of stress in the adhesive than with the UpWind design used in the project (for example, see [4]).

GEC and UpWind Beams
The Henkel GEC beam and Henkel UpWind beam shown in Figure 7 have a similar geometric cross-section to a classic I-section, as used today in common blade designs. The beams are supported and loaded by steel bolts that are press fitted and bonded into the beams. In order for the beam loads to be borne by the bolts, these regions are reinforced. The calculated loads on the Henkel UpWind beam are shown in Figure 8. To take account of any differences in blade design and to guarantee conservative results a “safety factor” of two was chosen on the shear stress. A similar load condition was attained in the Henkel GEC beam by varying the flange width.

FE Beam Simulation
The measurement of local strain using the beam model is possible with the help of strain gauges or optical methods. Spatially resolved analysis of the load on the adhesive was carried out using computer simulation (Figure 9).

Special modeling tools are then used to simulate the mechanical behavior of fiber composite materials. These are able to effectively show the anisotropic behavior of the individual layers. Material parameters for the laminates are available as validated empirical values or measured values. Such values have been published by Sayer et al. [7]. The mechanical characterization of a structural adhesive requires stress-strain curves determined with pure tensile and shear loads.

The pure load condition for tensile is achieved in accordance with EN ISO 527-2. The pure load condition for shear is achieved using hollow cylinders under torsional loads (DIN EN 14869-1). In combination with suitable experimental boundary conditions, a model can be developed to determine stress and strain in a three-dimensional subcomponent model. The result is an economic assessment tool for the evaluation of different adhesives and bond-line geometries.

Cyclic Tests
In total, six cyclic progressive tests were performed using the Henkel Macroplast UK1340 adhesive: three on the Henkel GEC beam, and three on the Henkel UpWind beam. A further test was carried out using Macroplast UK1351 adhesive. Figure 10 (the maximum axial stress in the adhesive is plotted) shows that the Wöhler exponent κ lies in the region of the standard value of Germanischer Lloyd [3] for a unidirectional laminate.

Figure 11 shows the test results for the Henkel UpWind beam and the Momentive adhesive from the UpWind project (the maximum axial stress in the adhesive is once again plotted here). The Wöhler exponent κ is higher; however the ultimate strength is lower. Differences in the mixing and dispensing process (laboratory methods versus industrial machine mixing) complicate a conclusion about the relative performance of the tested adhesives. Different beam variations were tested with the Momentive adhesive. For example different joint widths were considered and also a thin biaxial stitched glass fabric (840 g/m2) was laminated across the bonded joint. This leads to a slight reduction in the shear stress in the bonded joint (ca. 25 percent for linear calculation).

These grew across the entire height of the bonded joint and ended at the flange and web laminate. Cracks spread from there to the interface between the laminate and adhesive and led to failure of the structure (Figure 12). It was observed that the density of the axial cracks in the Momentive adhesive was higher than in the Henkel Macroplast adhesive. This could be attributed to normal variations seen in the mixing process.

Summary
Component tests are a worthwhile addition to tests on material and full scale rotor blades level that are currently widely used in the wind power industry. The Henkel UpWind beam design leads to stresses in the adhesive of the flange-web joint that is similar to that in rotor blades. The failure behavior of the adhesives was similar. A pure shear stress, under the tested conditions, had no noteworthy effect on the service lives of the test specimens. Cover laminate for the bonded joint led to a significant increase in the service life. As subcomponent beam tests could play a leading role in the future development of adhesives for wind turbines, the objective is now to establish this economic method to assess the performance of adhesives as a standard test for the wind power industry.

Acknowledgement
The participation of Fraunhofer IWES in the EU UpWind project was made possible by the HookUp2Wind research project, which was funded by the BMU (Federal Ministry for the Environment, Nature Conservation and Nuclear safety). 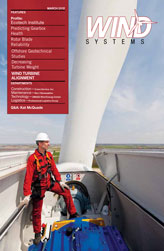 Building a Structure for Safety