As wind turbines increase in size, and their operating conditions become more extreme, a number of current and future tribological challenges exist.

The drive for an increase the amount of sustainable energy sources has given rise to increasing interest in the development of wind turbine technology. Although wind turbines are being increasingly installed around the world, several of the components in a wind turbine have challenges related to tribology that can drastically reduce their expected lifetimes.

Most modern wind turbines are configured with three composite blades in a horizontal-axis setup, transmitting rotational power to the hub of a center nacelle that is mounted onto a steel tower. The nacelle itself contains a main driveshaft onto which the blades are connected, as well as a gearbox and generator. The rotational power from the blades is thus converted into electrical power inside the nacelle.

Although wind turbines are being increasingly used around the world, wind turbine manufacturers and operators are consistently faced with tribological issues that drastically reduce the lifetimes of gearbox systems and increase costs. The ANSI/AGMA/AWEA 6006-A03 standard [1], which was developed for the specification of wind turbine gearbox design, contains maintenance specifications based upon an expected gearbox failure lifetime of 20 years. However, a number of investigations [2] have demonstrated that repair and/or replacement of gearboxes is required over significantly smaller time intervals than that which is expected. The additional cost of providing unexpected maintenance and/or repair to wind turbine systems significantly affects the cost of wind energy as a whole.

Gearbox: The gearbox in a wind turbine system generally employs three stages of gear enhancements in order to provide the appropriate speed ratio between the low- and high-speed shafts. The diagram of a typical gearbox configuration is shown in fig. 1. Each stage can be designed in either an epicyclic or parallel arrangement, with one or two intermediate shafts used to transmit power between the low-speed and high-speed shafts. Because of its harsh operational environment, the gearbox as a whole must be developed with a number of design considerations. In particular, the gearboxes must be designed to handle highly varying loads from the low-speed driveshaft due to the transient nature of wind. The gearbox must also contend with braking loads when the overspeed brake is engaged, as the brakes on most wind turbine systems are connected to the high-speed shaft [3]. The gearbox may also be subjected to contamination and large variations in external temperature. Efficiency and noise generation are also significant concerns that are considered in wind turbine gearbox design.

The gears of a wind turbine system are subjected to both rolling and sliding contact under varying load. In order to prevent wear damage to the gear teeth, the gears are typically lubricated using oil. The oil serves to create a thin film between the mating gears, allowing for elastohydrodynamic lubrication (EHL) between the mating surfaces.

Yaw Drive: The yaw system serves to orient the blades in the direction of the wind. This movement is normally only made a few degrees at a time [4]. A commonly used yaw configuration involves a rolling slewing bearing that uses a rack-and-pinion system to allow several motors to control the axial motion. When the correct yaw position is reached, several brake calipers clamp onto a rotor on the yaw drive in order to fix the yaw direction.

Pitch Drive: The base of each wind turbine blade contains an actuator (either hydraulic or electromagnetic) to actively adjust the angle of attack, or pitch, of each blade into the wind. The pitch variation allows the blades to extract an optimal amount of power under varying wind speed conditions, and also protects against gusty wind situations. The pitch bearings are directly exposed to the harsh environment, and must operate under severe loads.

Low-Speed Bearing: Because the main or low-speed shaft is directly coupled to the blades, the low-speed bearing is subject to cyclic stresses that can cause premature failure. The cyclic stress is caused by the varying torque of each blade as it rotates from the highest altitude (where the wind speed is greatest) to the lowest point (where the low altitude and the presence of the tower causes the wind speed to be fairly low).

High-Speed Bearing: Studies have shown that the high-speed bearing is one of the areas of the wind turbine that is most susceptible to failure [4]. A combination of cylindrical roller bearings, four-point contact ball bearings, and/or tapered roller bearings are used to support the applied radial and thrust loads.

Filtration Issues: The gearbox oil is circulated using a distribution system inside the nacelle. In addition to lubricating the mating components, the distribution system also serves to filter contaminants from the oil and regulate the oil temperature. Particle removal efficiency of filters may be limited by pressure losses across the filters, especially during cold starts due to higher oil viscosity.

Contamination Issues
Contamination from both solid particles and water entrainment can be common in wind turbines, and both have detrimental effects on the lubrication of gears and bearings.

Particulate Contamination: Particulate contaminants pose a significant danger if entrained between contacting surfaces. In concentrated sliding contacts (gears) hard particles abrasively wear away material, leading to loss of clearance and loss of power transmission efficiency. Trapped particles in rolling contacts may cause micropitting (dents in the contacting surfaces, as shown in fig. 2), and also the initiation of surface cracks, leading to fatigue spalling. Contaminant particles can either be built in during start-up, be entrained from the environment during operation, or be internally generated. As shown in fig. 3, hard ductile particles typical of gear teeth wear debris are the most damaging for fatigue spalling [5].

Water Contamination: Contamination from water is also a major issue in wind turbine gearbox design. The ANSI standard [3] lists many of the possible detrimental effects of water contamination to the gearbox lubricant. In particular, wind turbine operators have observed that water entrainment in gearboxes can significantly degrade the gearbox lubricant by causing the lubricant to foam or lose its ability to create a sufficient film for EHL contact. Water contamination can also cause the formation of rust on internal components, or react with the additives in the lubricant and diminish their effectiveness. In order to minimize or eliminate the effects of water contamination before the wind turbine is placed into service, it is generally accepted that the manufacturing environment must be clean and dry, and the components must be shipped to the operation site in a manner in which it is sealed from water entrainment. After being placed into service, wind turbines can still be subject to water contamination depending on their operating environment [6].

A chart of the tribological challenges that are faced by various components in a wind turbine is shown in fig. 4. As the diagram shows, contamination can lead to problems throughout the entire wind turbine system. In addition, there are a number of other tribological issues that are encountered locally.

Wind turbine designs have evolved significantly since their initial growth phase in the early 1980s. As increasingly powerful wind turbines have been designed over the years, more attention has been paid toward providing effective gear and bearing lubrication and increasing gearbox lifetime. Although a great deal of advancements have been made, a number of current and future challenges exist as wind turbines increase in size and their operating conditions become more extreme.

From the proceedings of the STLE/ASME International Joint Tribology Conference 2009, courtesy ASME. 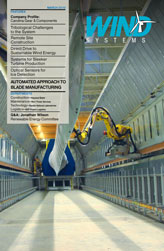 Managing the Grid in Maui