After spending three decades working in the construction industry, M.A. Mortenson, Sr., decided that it was time to start a company of his own. So on April 1, 1954—April Fools’ Day, no less—and at 48 years of age, he took the leap. “I had mixed emotions as I hung out my construction shingle,” he has written of that day. “Most companies don’t survive their first few years, and I knew that it would take some breaks along the way to make it.”

By the time he passed away in 1986 he had lived long enough to see Mortenson Construction, which was founded and is still headquartered in Minneapolis, do far more than merely “make it,” evolving into a massive entity with a global presence that is active in a wide variety of projects, including wind-farm engineering, procurement, and construction (EPC). The first such farm was completed in 1995, according to Jerry Grundtner, the company’s vice president of project development.

“It consisted of erecting a single Vestas wind turbine in Adair, Iowa,” he says. “We installed two that year in the same state, as a matter of fact. And while it was great experience for us to get started by working on smaller projects, our involvement in the wind industry has grown along with the ever-increasing scale of the projects themselves.”

So much so that the company’s Wind Energy Services—which is housed within its Renewable Energy Groups umbrella, alongside sectors devoted to solar energy and biofuels—has completed some 87 wind power facility projects throughout North America to date. That effort has resulted in the installation of 4,747 turbines providing 8,455 MW of electricity, making up 24 percent of the nation’s existing wind power capacity. That’s equivalent to pumping renewable energy into approximately 2.1 million average U.S. households.

According to Grundtner, Mortenson is a design/build EPC contractor of wind energy projects, and despite its level of involvement on a particular job two things always remain the same. “We always erect the turbines, using our own crews, which is pretty rare,” he says. “And we always handle the foundation work ourselves, all the way from the design to the forming, pouring, and installation. About 80 percent of our work is turnkey, providing all of the EPC aspects so that we’re building the farm from start to finish, including roads, collection, and substations.”

With projects ranging from Maine to Hawaii, and from Texas to British Columbia, the company has played a significant role in the development of wind power in the North American market. But it also supports the industry in other ways, including building the most-recent addition to the National Renewable Energy Laboratory’s campus and the new nacelle and blade manufacturing facilities commissioned by Vestas, all of which are located in Colorado, where Mortenson Construction has an office in Denver. Others are found in Chicago, Illinois; Washington, D.C; Madison and Milwaukee, Wisconsin; Phoenix, Arizona; Seattle, Washington; and Shanghai, China.

With other divisions consisting of its Federal Contracting Group, Full Service Facility Solutions, Mortenson Development, Inc., and its Sports Group, the company harnesses the expertise it has amassed as an early entrant into the wind-farm construction market via R&D relationships with various tower and turbine manufacturers, developing leading-edge technologies to the benefit of the industry at large. “We’re currently working with a couple of manufacturers who are intending to deploy 100-meter towers in the near future,” Grundtner says, “so we’re helping them work out the details in terms of the logistics and overall cost-effectiveness of such an endeavor.”

As a family-owned company—M.A. Mortenson, Jr., is currently chairman, David Mortenson is executive vice president, and Mark Mortenson is corporate secretary—Mortenson Construction possesses the financial strength to enter into wind-farm projects of any size with confidence. “We’ve been committed to the wind-energy business for 15 years now, and we are one of the leading contractors in this particular market, so we want to be proactive in its continued growth and development.

“We have the ability and expertise to support our customers on their smallest projects all the way up to their largest, which isn’t something everyone can do,” Grundtner says. “But Mortenson Construction certainly can.” 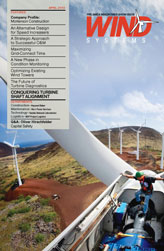