Ever since Heron of Alexandria tapped the wind’s power to operate a musical organ in the first century A.D., engineers and inventors have created imaginative mechanisms for harnessing wind power. Almost all of the ensuing systems have taken advantage of the basic blade design of a windmill, which gets its name because its primary applications until now have involved mills such as grinding mills, sawmills, and hammermills. Today, however, using the wind to turn a generator to produce clean, renewable, and sustainable electric power has become the overarching objective. No longer does the challenge in wind systems development involve how to produce wind-generated power, but how to capture as much of the wind’s power as possible and convert it into electricity.

Of course, electric companies, inventors, and energy entrepreneurs want to develop power-generating wind turbines in an efficient and cost-effective manner. This is no easy task because of the range of engineering, economic, and organizational challenges that they face. Many wind systems developers are tackling the engineering difficulties involved in optimizing wind turbine development by leveraging 3D CAD technology. By using 3D computer-based design tools, designers and engineers can not only create models of new turbine designs but also simulate their performance and optimize their geometries, while using product data management (PDM) software to streamline the entire development process.

3D CAD Eases Offshore
Maximizing the energy potential of the earth’s wind requires building power-generating turbines where the wind is most prevalent. One of these areas—the wind-rich oceans of the world—presents a unique set of engineering challenges that require specialized expertise. The company that developed the first wind turbine towers in 1986 is now using SolidWorks® 3D CAD tools to take on the task of laying the foundations for the burgeoning offshore wind turbine market.

With offices in Denmark and the United Kingdom, Rambøll Wind Energy—part of the Rambøll Group A/S, a global engineering consultancy with more than 8,000 employees and 200 offices worldwide—has delivered the substructures for more than 60 percent of the world’s offshore wind power capacity, which amounts to more than 500 offshore wind turbine towers. Rambøll develops the infrastructure that secures the tower to the ocean floor, including piles, platforms, ladders, and boat landings. The structures, which penetrate up to 30 meters into the seabed, must withstand the constant pounding of tides, waves, and currents, in addition to the loads of the wind tower itself.

In 2007, Rambøll management decided to upgrade its existing 2D design software to a 3D CAD system. Company managers believed that by moving to a 3D CAD platform engineers could consistently and efficiently develop, communicate, and produce the high-quality, innovative designs that would enable the company to continue to grow, according to Filipe Ângelo, a structural engineer in the Esbjerg, Denmark, office.

“It took a lot of time in the previous package to output detailed drawings,” Ângelo recalls. “We were interested in 3D CAD not only as a means for accelerating drawing production but also for taking advantage of improved design visualization, which we believed would make us even more competitive by optimizing the quality of our final product.” Figure 1

Rambøll decided to implement SolidWorks Premium design software because it is easy to use, provides greater flexibility, and improves design communications. Since implementing SolidWorks software in mid-2008, Rambøll has advanced its capacity for developing innovative wind tower designs while simultaneously increasing design accuracy by 20 percent. “SolidWorks enabled an incredible improvement in our final products in terms of detail, quality, and flexibility,” Ângelo notes. “SolidWorks 3D modelling provides a robust and aesthetic overview of the model. With this simple, clean environment, it is much easier to identify design errors and correct them early in the project.”

The improved quality afforded by SolidWorks helps to ensure safe, productive performance during construction and operation of the offshore wind turbine. “With SolidWorks, we can limit obstructions and discover clashes during the design phase so there are no issues when we send the turbine out to the platform,” according to Mike Hallett, senior design engineer in the U.K. office.

Upgrading its development platform to the SolidWorks 3D design system has allowed Rambøll to continue its dominance in offshore wind power—a 60-percent share of the global market. “Innovation has helped us gain a commanding share of the offshore wind turbine market, and SolidWorks is one of the tools that help us to innovate freely,” says Kai Birger Olsen, engineering director at the U.K. office. “SolidWorks enables us to produce better-quality, more-precise preliminary designs faster than our competitors. When a project comes in we can calculate the operation of up to 100 turbines in one go, analyzing many factors such as the wave loads and rapidly produce designs that take them all into consideration.” Figure 2

Simulation Drives Innovation
With a tried and tested design like a windmill, one might think that there’s little potential to improve upon a fundamental design concept that has proven its effectiveness over the centuries. Yet with 3D CAD technology engineers can take the basic geometry of a wind turbine and use simulation tools to optimize it shape in a way that maximizes its ability to catch the wind and turn it into electricity.

For example, just as the angle and intensity of the sun’s rays change throughout the day, wind direction and speed vary widely. Most wind turbines are stationary and constructed to face in the direction of the prevailing winds. However, the ability to adjust the perspective of turbine blades to catch the wind and compensate for sudden changes in wind speed is an innovation that can extend the lifespan and boost the efficiency of wind-based generating systems.

A pioneer in solar power, ADES (Aplicaciones De Energías Sustitutivas), set out to apply the same concept to the wind power market that has made its industry leading solar-tracking systems so successful. Like a flower chasing the sun, the Spanish company’s solar panels include autonomous tracking systems that slowly move the panel so that it remains directly aligned with the sun’s rays throughout the day. ADES engineers believed that they could apply the same approach to wind turbines to not only improve the quality of power output, but also to make them last longer.

The company had used a combination of 2D and 3D design tools until 2007, when management decided to reassess ADES’ design platform in anticipation of an expanded product offering, according to Fabian Riveros, technical office director. “Our entry into the wind turbine market compelled us to look at upgrading our development environment to improve our efficiency,” he recalls. “We needed a single platform within which we could do all of our design work, including simulation. That way we could quickly bring breakthrough products in wind turbine design to market.”

“We particularly value the SolidWorks Simulation capabilities because we can easily analyze our designs without changing formats or modifying drawings, as we did in the past,” he says. “The integration between applications provides the speed and versatility we need to create innovative products while achieving our productivity goals.” Figure 3

ADES engineers utilized SolidWorks design and simulation software to create the company’s revolutionary single-blade pendular wind turbine. With conventional wind turbine designs, the lack of evenness in intensity and direction, as well as the continuity in wind, can damage both turbines and the electric system to which they are connected. The unique ADES pendular wind turbine employs a downwind construction shape that automatically orients itself toward the wind by means of three passive mechanical systems: a swiveling single-blade rotor, a pendulum power train, and a self-steering nacelle. The design compensates, accumulates, and reinstates wind speed variations, preventing them from affecting the evenness of generator rotation and subsequently diminishing structural overload and power peaks caused by wind gusts. With lower stress loads, the turbine tower has a longer lifespan and requires fewer materials in its construction, thereby lowering the cost.

“The project took just six months with a team of six people,” Riveros says. “Simulation was the key to helping us create this product so quickly and shorten our design cycle by 25 percent.”

ADES débuted its 100 kW and 250 kW pendular wind turbines at last year’s Wind Power Expo Fair in Saragossa, Spain, and is working on 1000 kW and 1600 kW turbine models. Riveros asserts that the versatility of SolidWorks design and simulation software enabled the company to cut in half the time it took to bring this revolutionary product to market. “Because of the benefits SolidWorks provides in terms of design speed, we are more competitive,” Riveros says. “It allows us to come up with fast solutions and provides realistic views and animations of our design projects.”

PDM Energizes Development
An often-overlooked aspect of efficient wind system development is effective management of the large volume of data associated with wind turbine design and production. PDM—particularly when integrated with 3D CAD design software—can also boost productivity in wind systems development, especially when an organization is operating on a large scale, like the wind tower factory at Martifer Energy Systems. Figure 4

Headquartered in Portugal, Martifer comprises 120 companies across 20 countries. The global concern first implemented SolidWorks 3D CAD software at its wind tower factory in 2004. Less than five years later Martifer began a PDM implementation designed to increase efficiency across its organization, according to António Caroço, director of information systems and best practices at Martifer. “The company had grown so quickly that we needed to take our systems and processes to a completely new level,” he explains. “We embarked on a huge transformation program that involved a thorough assessment of our processes, software, and systems in an effort to integrate our design work, take advantage of our diverse expertise, and generate greater efficiencies across the organization.

“Our design groups used to work in silos,” Caroço goes on to say. “We wanted to standardize our software solutions and establish best practices as a strategy for encouraging our divisions to work more closely together. After exploring the product lifecycle management (PLM) concept, we ultimately decided to work with Sqédio [Integrated Technology Solutions] to further customize and expand upon our proven SolidWorks CAD and CAE solutions by adding SolidWorks Enterprise PDM software.”

The implementation of SolidWorks Enterprise PDM software at the Martifer Wind Energy Systems division marked the first step in a company-wide deployment that is designed to solidify best practices and establish standardized workflows across Martifer. In addition to facilitating design revision control, promoting collaboration, and encouraging design reuse, the system has reduced the company’s data storage expenses.

“We view PDM as the key data foundation of the organization and plan on replicating our initial implementation throughout Martifer,” Caroço says. “SolidWorks Enterprise PDM fits our needs because it is easy to learn, requiring minimal training; uses open source code, making it easy to customize; and is integrated with our engineering systems, supporting our goals of formalizing best practices and improving efficiency.” Figure 5 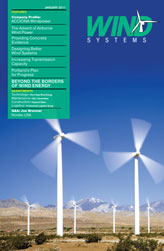 Composite Blades of the Future

Wind is on the Rise