Last spring, the United States Department of Energy (DOE) set an ambitious goal that, if achieved, would usher in a new era in American energy. The DOE’s target: to generate 20 percent of the country’s electricity with wind energy by 2030.

Today, the U.S. is on track to meet or exceed that target. In 2015, wind was America’s largest source of new electric generating capacity, representing 35 percent of all new energy to come online. That’s more than solar or natural gas. Overall, there’s now enough wind energy in the U.S. to power 19 million American homes, and the U.S. produced more electricity from wind than any other country in 2015.

At the state level, progress is just as impressive. Last year, Iowa became the first state to generate more than 30 percent of its electricity using wind. Overall, wind now reliably supplies at least 10 percent of the electricity in a dozen states.

Reaching these milestones means not only cleaner energy, but significant economic activity as well. More than $128 billion has been invested in the U.S. economy over the last 10 years from the construction of new wind projects, while the country’s fastest growing job is now wind turbine technician.

Cost declines of 66 percent in the last six years combined with the long-term policy stability achieved with December 2015’s five-year extension of the Production Tax Credit mean wind energy is poised for even greater growth in the years to come.

As the U.S. wind industry has matured and gets ready to move to the next level, we at the American Wind Energy Association (AWEA) realized it was time for the AWEA Windpower 2016 Conference & Exhibition to do the same.

After gathering feedback from AWEA members on how to best meet the evolving industry needs brought on by increasing demand, we decided that Windpower — the largest annual wind energy conference in North America — needed some adjustments.

One of the biggest changes is to the conference’s education program.

With “Generation Wind” as 2016’s theme, we crafted a program that encompasses the growing demand for wind energy, and for the first time, made it available to all Windpower attendees. We’ve quadrupled the number of sessions, and we’re placing them all on the show floor. Every attendee and exhibitor alike can benefit from the 99 presentations and sessions scheduled across five main stations throughout the exhibit hall.

For a better understanding of how the industry’s leading experts are pushing for a new wave of global wind development, visit the Power Station where attendees will hear about new commercial opportunities, market expansion, and lessons learned and applied. Owners and operators looking for management strategies to address current and future operational life-cycle issues will find everything they need at the Operations Station powered by UpWind Solutions.

At the Technology Station powered by GE Renewable Energy, leaders in business, academia, and government are coming together for a discussion on ways to advance innovations in wind technologies that could fundamentally change the industry. The Project Development Station powered by AWS Truepower is where attendees can examine every step involved in developing a wind project, from siting and wildlife to transmission, integration, and forecasting.

Returning from last year’s conference, the Thought Leader Theater powered by Mortenson will be dedicated to defining the future of wind with more than 14 hours of forward-thinking and thought-provoking content.

Continuing to build a better future is a key aspect for Windpower’s theme, Generation Wind, because today’s youth are tomorrow’s leaders. The next generation of wind leaders is more attune to the positive environmental impacts of wind and the ways in which it can strengthen the economy.

At Windpower 2016, junior high school students will put their talents to use at the National KidWind Challenge. Teams of undergraduates will also attempt to use skills across several disciplines to research, site, market, and build hypothetical wind projects during the DOE’s Collegiate Wind Competition. Local area schools will also have the opportunity to learn about wind energy during the conference’s “Public Day.”

Perhaps most notably, veterans will have the opportunity to connect with up-and-coming leaders during the Emerging Leaders Program. This is a chance for wind’s next generation to absorb wisdom from the old guard, while also providing their more experienced counterparts with new perspectives and fresh ideas.

See what Generation Wind is all about at the AWEA Windpower 2016 Conference & Exhibition May 23-26 in New Orleans. American wind power has turned a corner, and you’ll be able to get all the information you need to make sure you stay ahead of the curve.

For more information, go to www.windpowerexpo.org. 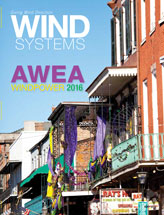