The winds of fortune are shifting rapidly for the energy sector. The rise of hydraulic fracturing and the ongoing OPEC-driven supply glut have pushed fossil fuel prices well below historic norms. While there is evidence that supply is once again starting to constrict, the continued abundance of dirty but cheap fuels, particularly natural gas, has called the economic viability of renewable energy into question. Conversely, the signing of the Paris climate accord and the EPA’s renewed efforts to regulate carbon emissions mean the political and social climate for renewables has never been better. Throw in the unprecedented interest and investment in new energy technologies, and the prognosis for the industry quickly becomes chaotic.

But it is not a chaos without opportunities for wind power.

For existing supply chains, conditions remain largely favorable. It’s true that a strengthening dollar and a flagging global economy have continued to pressure the already anemic U.S. manufacturing industry. With that said, energy manufacturers seem largely immune to these woes. While overall, the industry has shed 13 percent of its workforce over the past decade, employment within the turbine-manufacturing subsector, which of course includes wind power, actually has grown by more than 40 percent. Likewise, it is one of the few manufacturing niches to enjoy a multibillion-dollar export surplus over the past several years.

The regional players benefiting from these trends remain the usual suspects: Texas, the Midwest, and parts of the South. These clusters are well-positioned to dominate this burgeoning industry, and they are home to a robust manufacturing heritage with easy access to both strong logistical hubs and prominent wind-energy markets. Moreover, all signs point to a growing domestic demand that will keep suppliers busy for the foreseeable future.

Iowa took the lead in this wind-energy charge with a recent announcement from MidAmerican Energy promising to add 1,000 new wind turbines to its grid. The additional 2,000 MW of energy provided will boost the state’s renewable portfolio to 85 percent, matching last year’s pledges from Vermont and Hawaii for near-carbonless electricity production by 2050, and those announcements were the cherry atop what was already a boon year for wind power. According to the Energy Information Administration, some 8,112 MW of wind capacity were added in 2015. Accounting for 41 percent of total new capacity, wind power was the leader in additional renewable generation, and indeed additional generation in general, for the year.

All of this indicates that America’s wind industry mostly has been unaffected by the strife facing its fossil-fuel counterparts. In fact, it may be benefiting from that strife. Faced with the economic and political uncertainty surrounding traditional energy sources, many utilities and state governments seem to be opting for less volatile renewables, wind power included. But some of the most exciting developments for the industry aren’t political or economic, or even related directly to wind. They’re happening in the realm of batteries.

Tesla’s planned Gigafactory, its Powerwall prototypes, and the general renaissance of battery technology could shape the future of the green-energy sector. If they prove economically feasible, such innovations would unshackle renewable energy from the constraints of weather and sunlight and encourage investment in distributed generation. It has traditionally been solar that is viewed as the go-to resource for small-scale commercial and residential energy projects. However, recent improvements in vertical-turbine technology have created new opportunities for the so-called “small wind,” particularly in the Northeast, Great Lakes, and Pacific Northwest regions where sunlight is not plentiful.

That’s not to say wind technology, big or small, cannot make yet even greater strides in improving reliance and efficiency.

It should therefore come as good news to pioneering wind-energy researchers that President Barack Obama signed a permanent extension of the R&D tax credit in January. Similarly, state-level R&D credits such as those found in Minnesota and Louisiana can go a long way in offsetting the costs faced by entrepreneurs entering the market. Combined with the numerous wind-energy rebates and subsidies cataloged by the Department of Energy’s DSIRE database, the conditions are set for the continued evolution of wind designs.

But just as public policy can be the great benefactor of wind power, it also can be a hurdle. In Texas, for instance, the last legislative session saw efforts to roll back portions of the state’s renewable energy portfolio. As the political battles over the country’s energy future continue to heat up, it’s likely similar initiatives will become more frequent at both the state and national level.

The lesson of the ongoing policy debate is clear: Wind producers cannot rely on public support to be relevant, but must rather remain successful in their own right. The good news is both manufacturing and research operations within the industry show great promise. The future of America’s energy sector is uncertain, but it’s also diverse. More importantly, there is a clearly defined role to be played by wind power. As long as the industry doesn’t become complacent and fail to adapt, there’s no reason wind energy cannot remain profitable for decades to come. 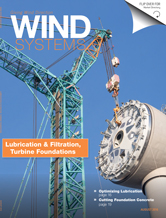 How we can make our hazards more conspicuous and safer