The project marks Pattern Energy’s first wind project outside North America, and expands the company’s portfolio to eight operating wind projects across three countries. The completion of the project expands Pattern’s owned operating capacity by 36 MW (representing its proportional interest in the project) to 1,042 MW.

“With the completion of El Arrayán Wind we are expanding our portfolio of world-class wind power projects with stable long-term cash flows in attractive markets,” said Mike Garland, CEO of Pattern Energy. “We were drawn to Chile for its robust and stable economy, its electricity pricing in U.S. dollars and its aggressive policy to expand renewables given their limited domestic energy resources. The project is one of the best wind sites in all of Chile. We have delivered El Arrayán on time, increasing our total operations to eight operating wind facilities with three more projects totaling 393 MW in construction, all of which are on track to be completed this year.”

El Arrayán Wind is located approximately 400 km north of Santiago on the coast of Chile, in a location with strong coastal winds. The El Arrayán project will generate clean, renewable power equal to the needs of approximately 200,000 Chilean homes each year. The facility is utilizing 50 Siemens 2.3 MW wind turbines, which Pattern Energy is also using at other wind projects in Canada and the United States.

Pattern Energy is the operator of El Arrayán Wind and is a joint venture owner with a net ownership interest of 31.5 percent in the project. Its joint venture partners include AEI El Arrayán Chile SpA, a subsidiary of AEI, and Antofagasta Minerals SA (AMSA) with net ownership interests of 38.5 percent and 30 percent of the project, respectively. In addition, AMSA is the controlling party of the off-taker Minera Los Pelambres, which will acquire approximately 70 percent of the project’s expected electricity generation through a long-term fixed-for-floating hedge. The project will sell its remaining output into the Chilean spot market at the prevailing market price at the time of sale.

Arrayán connects to the Sistema Interconectado Central’s 220kV transmission system. The project is located on approximately 15,320 acres of coastal land on a long-term lease with a single landowner.

Approximately 200 jobs were created during construction, as well as up to 15 ongoing permanent positions. The project was constructed by Skanska Chile SA, a subsidiary of Skanska AB and one of the leading wind-focused construction firms in Chile.

Compared to generation from a coal-fired power plant, the electricity produced annually by El Arrayán Wind will offset more than 300,000 metric tons of carbon dioxide, the equivalent to the annual carbon footprint of an estimated 70,000 Chileans, and will conserve enough water to meet the needs of more than 11,000 Chileans. 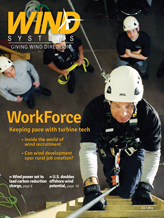