According to the Danish Wind Industry Association, annual maintenance costs of older wind turbines (25-150 kW) average around 3 percent of the original turbine investment, while newer turbines are estimated lower from 1.5-2 percent per year. The organization also cited that the price of a new set of rotor blades, a gearbox, or a generator is typically 15-20 percent of the price of the turbine. Modern wind turbines are designed to be operational for 120,000 hours during their 20-year lifecycle.

With a price tag of nearly $3.5 million installed, commercial scale 2 MW turbines cost tens of thousands of dollars to maintain and operate yearly. When a major component fails, the bill can rise to over a half-million dollars for a replacement, not to mention the enormous cost of downtime and lost revenue. MRO (Maintenance, Repair, and Operations) executives are also adversely impacted by the remote locations of wind parks, unscheduled breakdowns, and a general lack of qualified technicians for preventative maintenance.

Advanced Diagnostics Technology
The challenge of maintaining and operating a wind turbine should be considered with a diagnostic strategy to health monitor and troubleshoot its maze of machinery, controllers, and electronics—literally thousands of parts. Originally developed for NASA applications, model-based maintenance technology has emerged for other sectors of industry where complex systems and expensive downtime are prevalent. Wind power operators looking to reduce disruptions in service may benefit from a well-exercised, systematic approach to MRO that has been field tested by industries such as aerospace, automotive, military, factory and industrial, marine, and more. Figure 1

Qualtech Systems, Inc. (QSI) started on the ground floor of this knowledge revolution to capture insider expertise, and pioneered intelligent diagnostic software solutions around space vehicles, jet engines, telecommunications, medical equipment, and other unique product scenarios. The company cut its teeth on the most formidable “rocket science” projects in town: the new Crew Exploration Vehicle (CEV), the International Space Station, the Unitary Wind Tunnel control systems, the Integrated Vehicle Health Management systems, Project Constellation, and the F135 Joint Strike Fighter program, just to name a few. During these projects QSI engineers discovered that knowledge of how a system fails can be used strategically to keep the equipment working whether it is a system that propels a spacecraft, generates power, or screens transportation systems.

After a decade of research and development and successful partnerships with NASA, Qualtech Systems adapted its TEAMS® (Testability Engineering and Maintenance System) software for large-scale commercial field operations. The TEAMS model literally captures a system’s infrastructure, interconnections, tests, procedures, and failure modes. This data is linked to built-in system tests and repair procedures, and then used to equip field technicians and maintenance engineers with sophisticated tools to streamline troubleshooting capabilities for any level of expertise.

Accessing Knowledge in the Field
Instead of reacting to a system malfunction randomly or using a static decision tree, the field service technician interacts with a dynamic reasoner that computes a diagnosis and charts a response to particular failure conditions. The conclusion can be influenced by the availability of certain tools and test equipment. Procedures are optimized based on time and cost. Essentially, TEAMS assesses the breakdown symptoms and test results, presenting instructions to stabilize the situation. Figure 2

Unlike other diagnostic tools that offer a plurality of suggestions, model-based diagnostic software gets down to business. It isolates the root cause for specific faults based on all its observations, considers resources on hand, then dynamically sequences the “next best test” to intelligently drive Interactive Electronic Test Manuals accessed by its browser-based software. The technician is steered expeditiously along a single path to the corrective action.

There are residual bonuses too. Over time modeling costs go down as models are reused and experience is gained. As data is logged and archived by TEAMS, a company can leverage this intelligence to reduce mean time to diagnose, refine system models, improve spare parts management, and fine tune training programs. On the engineering side, the historical data can be used to unearth vulnerabilities and influence future product design modifications. The data collected can also serve as a vital measuring stick for quality in all aspects of business: service, components and suppliers.

The TEAMS platform has four software components that support system engineering, system design and testability, automated diagnostics and troubleshooting, and system autonomy. TEAMS-Designer® is a graphical modeling and analysis toolset used by engineers for knowledge capture and lifecycle cost assessment. Field service technicians can use TEAMATE® on a portable laptop or handheld device such as a Blackberry to perform all needed diagnostics without connectivity to a host server. Figure 4

The TEAMS RDS® or remote diagnosis server enables telemaintenance around the world, and supports multiple simultaneous diagnostic sessions from a variety of remote systems. The same server can be used to translate the results from diagnostics, automatic tests, and manual tests conducted by a technician into clear step by step troubleshooting instructions. A reduction in false removal rates and travel costs are direct benefits of these capabilities. TEAMS-RT® enables onboard diagnosis and continual system health monitoring from the TEAMS model of the vehicle or machine.

Integrating Design for Serviceability
Worldwide market demand is a powerful arbiter of change. Next-gen and fresh wind power designs are flowing into the marketplace to capture wind in ingenious ways. Designs continue to trend toward fewer and longer lifecycle parts, and materials that are lightweight, ultra strong, and fatigue resistant. Figure 5

According to the 2009 wind industry study released in August 2010 by the National Renewable Energy Laboratory (NREL), wind turbine engineers have also implemented a palette of design changes to decrease both noise emissions and the environmental impact. The report also indicates that hub heights and rotor diameters have also scaled over time. Since the late nineties the average rotor diameter has increased by 69 percent, moving up to 81.6 meters as the average rotor diameter of wind turbines installed in the United States in 2009. During the same time period the average turbine hub height has increased by 39 percent, reaching 78.8 meters as the average hub height of wind turbines installed in the United States last year.

Within this changing landscape, new or modified designs impact wind power maintenance and operations in a profound way for both large- and small-scale operations trying to stay ahead of the curve in a climate where resources are razor thin. But all is not lost, as the implementation of model-based diagnostics can happen anytime during the product development cycle, even after the product has been manufactured or reengineered. Applications based on the TEAMS model can be deployed quickly, in time-frames measured in weeks or months. Figure 6

The opportune time to build the TEAMS model is at the beginning of the design cycle to capture product infrastructure and possibly leverage improvements while working with diagnostic experts who have years of experience working on diverse applications. On the other hand, legacy products and systems are successfully modeled and evaluated as well. If a company already has data in a structured format, it can be easily imported into the QSI system. Systems engineers can evaluate design concepts and proposed technologies, track design decisions, appraise reliability and availability of parts, and perform analysis to enhance the performance of mission-critical components. Figure 7

“By the time a product design is complete, 70 to 90 percent of the support cost is set in stone. Service organizations realize significant downstream savings when they can influence the design of a product up front,” according to Somnath Deb, chief technology officer at QSI. “The design of a product can be optimized until the ambiguity is reduced to an acceptable level. The life cycle cost and logistical footprint can be quantified very early on. Designing the right mix of fault codes into the product to improve fault diagnostics is one of the most inexpensive ways to improve design for serviceability. But the ultimate goal is to develop smart products that automatically indicate the exact service parts that need replacement instead of just generating fault codes. This level of maturity drastically reduces troubleshooting, as service personnel can just swap out the indicated replacement part.”

Predictive and Preemptive Maintenance
When it comes to taming the MRO tiger, product uptime is the bottom line. The old “swaptronics” approach to repair is taking its place on the sidelines. The era of predictive and preemptive maintenance technology is here and now for wind power manufacturers. From military vehicles to helicopter and aerospace engines, the groundwork has been laid and landmines cleared for commercial field maintenance operations. Developing near-optimal diagnostic strategies could be the competitive shot in the arm the wind industry needs to hold strong and squeeze out every cost benefit possible in tough economic times. 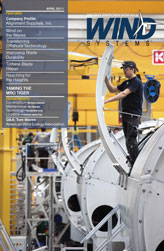 The Mobile Age of Service Technology