It seemed that only a few short years ago much of the wind industry didn’t have a plan for when or how they would change the factory fill oil that was in their newly commissioned wind turbines.

“I can remember pulling into an O&M barn at a wind site back in 2007 and asking, ‘Is there oil up there?’” said Gary Sage, CEO of Sage Oil Vac.

Before that, Sage had been building mobile oil change equipment for a number of industries for more than 10 years prior to this impromptu wind farm stop and he was curious if there was a market for such a system for the wind industry. The site manager responded that there were 80 gallons of synthetic gear oil in each turbine and his crew didn’t know when they would be required to change the oil. Sage was more astonished when he realized that the site didn’t have tools and processes for replacing the oil in the turbine.

“I guess we will have to do the bucket brigade when it comes time,” the site manager said.

Gearbox oil change decisions are sometimes based on service times such as every two or every three years, while some rely on oil analysis samples taken from the gearbox. The industry has evaluated and debated oil change procedures and frequencies over the last few years, ranging from getting as many years out of their factory fill synthetic as possible, to some determining that they will change the oil at the one or two year commissioning anniversary regardless of oil samples. Over the last four to five years, much has changed in the processes and technology related to oil changes in gearboxes.

“Evaluation of lubricating oils in wind towers, is at an all-time high,” says Randy Andersen of Dakota Fluid Power in Sioux Falls, SD. “The need for understanding oil types, oil properties, proper sampling and maintaining target cleanliness levels are all factors for determining the life of the oil. Oil is key to any gearbox or hydraulic system and if applied, the 3C’s (Clean, Cool, and Contain) the results can be very positive.”

Justifying Equipment for the Oil Change

“Our first system was a simple two-tank, two-step system — vacuum the used oil down the tower, and pump new oil back up,” says Phil Seidenberger, vice president of product development for Sage Oil Vac. “Customers wanted to know how many towers they could get done in a day. The more they could get done, the more easily they could justify the purchase.”

Another big change in the industry came when gearbox life cycle started to become an issue for then industry and it became evident that gear oil cleanliness and oil change frequencies could be the difference in a gearbox failing or lasting. Image 1

The industry started to realize that a basic two-step oil change process didn’t necessarily guarantee clean oil. Also, using buckets up and down tower left a lot of room for contamination of the fresh gear oil. As it became clear that more than a basic oil exchange was needed and the gearbox needed to be flushed, then using a gear oil exchange system is necessary. “It’s not economically feasible to change oil and perform an effective flush on a gearbox using buckets manually,” says Gary Sage.

“In the past, wind turbine companies depended on normal oil analysis iron levels as a determination of a good oil change. It seemed that just draining and filling the gearbox was enough. We know that normal ICP oil analysis can only see particles about five microns in size and smaller, whereas Analytical Ferrography can detect all ferrous particles of all sizes and is a much better evaluation in this case.

A recent field test comparison study was performed on eight turbines and the result was that just draining and filling will leave 50 percent of the particles in the gearbox. The study compared normal ICP iron analysis and Analytical Ferrography in two types of oil change procedures; drain and fill and the four-phase flush procedure. The four-phase procedure left just over .1 percent of wear particles compared to the 50 percent in the two-step drain and fill.

When the benefits of flushing the gearbox were realized, then essentially a single oil change became two or three oil changes at one tower. With the four-phase process, you are vacuuming and dispensing used oil, flush oil, rinse oil, and the final fill oil a number of times.

“Over the course of the year starting in 2007, customers went from the basic two tank system to asking about three and four tank systems with flushing capabilities. They weren’t as concerned about how many they could get done; they wanted to know how to replace the oil as cleanly as possible in a multi-step process. Customers didn’t care if they only got one turbine done a day, as long as they ended up with clean oil in the turbine. The industry shifted from quantity to quality, so to speak,” Seidenberger said. “The payback analysis went from ‘how many can we get done in one day?’ to, ‘what is it worth to see how clean can I keep my gearbox and oil during uptime and during oil changes?’” Image 2

The industry has options to obtain proper gearbox flush and oil changes. Equipment can be rented or bought outright or they can choose to contract with a third party who has equipment.

“Our customers include integrated wind farm owner-operators who have their own personnel running and maintaining the wind farm, third-party service providers, startup businesses that specifically offer oil change and flushing capability, manufacturers with personnel on-site during warranty periods, and O&M companies,” Seidenberger said.

The decision to rent or buy equipment versus contracting the service has pros and cons on each side of the equation. If a wind farm with 60 towers wants to have their own unit, it might be difficult to justify the $60,000 to $70,000 investment just to be used on their own farm. But they may be able to rent a unit only during the time period that it is needed, then use it for a month or two, and they are good until the next oil change is due. Some wind farms want to have ultimate control over the gearbox oil change and flush, from selecting the oil all the way down to using their own trained technicians to perform the work.

On the other hand, some wind farms want the expertise of a third party crew who are experts on the operation of the system and who have practice leaving the gearbox free of contaminates with very clean oil. Image 3

Sage’s Gear Oil Exchange System has an onboard CC Jensen 54/27 Fine filter system that will filter fresh gear oil down to ISO 16/14/11 levels. It is necessary in some cases to filter the new oil that is put in the gearbox as final fill. New gear oil out of the tote or drum can be less clean than the wind farm wishes to put in as the final fill.

“New oil is not always clean oil and needs to be considered when changing oil. If possible, it is recommended to run the oil through a filter every time you transfer and provide good housekeeping with storage and containment,” says Randy Anderson, sales manager of Dakota Fluid Power of Sioux Falls, South Dakota. “The ease and handling of oil is key to promoting cleanliness and eliminating accidents. Sage Oil Vac is a leader that has provided the equipment to handle your change out and filtration requirements of oil with ease. Sage has provided an air system for simple filling with the storage of new oil and ease of removing the waste oil, while also including a flush and a rinse for increasing the end result of a complete oil change in the field.”

“Building reliability starts with effective contamination control,” said Justin Stover, sales manger for C.C. Jensen Filtration. “The importance of clean oil in gearboxes has been well documented over the last four decades. Contamination in a wind turbine gearbox must be controlled throughout its life cycle. Contaminants are defined as anything foreign to the lubricant that alter its performance. Over 90 percent of the damage done to a gearbox is a direct result of particle and moisture contamination. Dirt and water are inevitably introduced during service and maintenance. These “wrecking balls” create wear particles that act as catalysts — in effect microscopic spark plugs — that cause more wear, tear and lubricant failure. While it is important that particles large enough to be seen or felt are not exposed to lubricants, more frequently it is the invisible particles that cause the most damage. That is why it is essential that a filter with a fine micron rating and water removal capabilities be selected and installed. Lubricants are what we buy – lubrication and contamination control are what we do to ensure optimum lifetime and reliability. We cannot wish greater reliability into existence. It must be the right lubricant, in the right place, in the right amount, at the right time, keeping it clean, and keeping it dry. Their design allows for ISO 320 Gear Oil to be vacuumed from a drum or a tote at a rate of 15 to 20 gallons per minute. This is done without a fluid pump or venting of tanks. The operator builds vacuum on the fresh oil tank and connects the barrel tote or straw and quickly vacuums fluid.  This is a time saving step that most people don’t factor in. The customer does not have to have a pump to transfer from the tote or drum to the Gear Oil Exchange unit.”

Once oil has been brought onto the Sage Oil Vac system, the customer can filter the new oil using a kidney loop fine filtration system, while simultaneously passing oil through a shell and tube heat exchanger adding heat to the oil for easier pumping capability.

The use of a 1000 PSI modified diaphragm pump with the Sage Gear Oil Exchange System leaves no gear pump wear metals in the filtered clean fresh oil. The unit also has a flushing wand that allows the uptower technician to insert the wand inside the inspection plate and wash down individual gears and ledges inside the box.

Certainly, much has changed in just a short period of time when it comes to gearbox maintenance, from the “bucket brigade” mentality to the gear oil exchange trailer two-step process of flushing and filtration. Whatever comes next, there is no doubt that much more thought and care has gone into extending the life of the gearbox. 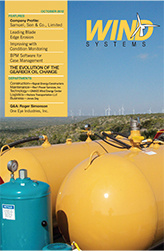