Denmark-based Vest-Fiber recently announced an expansion of its employment in the United States due to the strength of its wind turbine industry. Headquartered in Tarm, Denmark, as a global provider of fiberglass components to manufacturers of wind turbines, the company is expanding its Moberly, Missouri, facility. The expansion will result in the creation of 30 new full-time positions in the coming months.

“An increase in the company’s customer demands has resulted in the need for additional quality craftsmen,” said Corey Mehaffy, president of Moberly Area Economic Development. “Fortunately, our region of Missouri has an established track record of a workforce capability of supporting the growth of strong companies.”

Founded in 2000, Vest-Fiber is a traditional supplier of small fiberglass products and services to the wind turbine industry. Two years later, at the request of its clients, Vest-Fiber made an additional investment to begin fiberglass-cutting operations to supply material in prepackaged kits ready for the assembly process. The new process lent itself to creating efficiencies in the client’s workflow in their manufacturing operations, creating a value the client could not afford to replicate.

The increase in the proliferation of wind energy led the management team at Vest-Fiber to look at the industry on a global basis. It was in 2010 that their first operations outside of Denmark were established.

After a search that encompassed several midwestern states, the company planted roots in Moberly because it allows for easy access to existing clients in the wind corridor in the middle of the U.S. Available production facilities helped to reduce the start-up time of the new Vest-Fiber North American operations.

The Moberly location also provided an advantage to service new clients located on both the Eastern and Western seaboards of North America from one centrally located facility.

“Being located in the center of North America gives companies access to markets in the U.S., Canada, and Mexico,” said David Gaines, vice president of Moberly Area Economic Development. “There is a real value in logistics that companies through multiple industries can benefit from by being situated in the middle.”

“This is the fourth company in the central and northeast Missouri region that has announced an expansion of employment,” Mehaffy said.  “This is a strong indicator that local, national, and international companies can successfully conduct business on a global basis from Missouri.”

For more information,
go to www.moberly-edc.com. 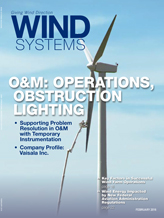