Traditionally, the most common method of transporting large wind components has been via specialized truck transportation carriers. In recent years rail transport has been effectively utilized by large volume manufacturers such as GE, Vestas, and Siemens. In special cases, however, there is a third option for moving components that takes advantage of the extensive inland water systems in North America.

Barge transportation is an excellent and viable transportation mode to move large, heavy components. Depending on the origin and final destination, barge allows for the mass movement of goods to or from southern Gulf ports using the inland river system, or using the Great Lakes St. Lawrence Seaway System for transportation to and from northern ports in the region. There is also the Columbia River system in the northwest, but it has a much smaller geographic reach. Barge has strong advantages when component are imported or exported because at some ports, such a New Orleans, components can be directly discharged from an ocean vessel into the barge while in the river, avoiding double handling and some port fees. Towers and wind blades have been successfully moved via barge for several years. Up to this time nacelles have not moved via barge in the river system, but there is little technical limitation for this form of transport if the conditions are right.

Barge transportation is a clean, economic mode of transport that avoids the congestion of cities and towns that trucks and rail must mitigate. The barge equipment along the rivers and lakes is standardized and, if required, can be reinforced for the heaviest of components. There is a wide range of service providers for barge movements, including asset based and non-asset based companies. When considering a barge move, the barge service provider will draw up a schematic of the laydown configuration and the securement plan. Typically customers are buying the entire barge, and the better the utilization of the barge equipment the more economical the transit costs. If possible, double stacking components using frames is a good way to increase utilization.

Different equipment runs in the different inland seaway systems, smaller box hopper barge are used for river transport and are not suitable for travel on the Great Lakes. Box hopper barges can access the closet Great Lakes ports such as Burns Harbor, Indiana, or Milwaukee, Wisconsin, but it is not recommended that they travel far in the Great Lakes. Similarly, Great Lakes vessels, which are much larger than the hopper barge, are not used in the river system. If a shipment needs to travel on both the Great Lakes and the inland river system, a transload must occur from one vessel type to another. Also, the Great Lakes vessels are subject to the Jones Act, which requires U.S. to U.S. port moves be service by a U.S. flag ship. This restriction limits carrier option. U.S. to Canadian ports do not have the same restrictions.

Transit time is another challenge for barge. It is the slowest form of transport, and enough time needs to be built into the delivery schedule to ensure components arrive on time. For instance, a barge move from Houston to central Illinois could take up to 25 days, and a move from New Orleans to central Illinois can take 15-20 days.

Another disadvantage of barge is that the system in the northern part of the country is shut down four months out of the year—December through March—due to freezing on the waterway. The inland river system shuts down just north of St. Louis, Missouri, where the Mississippi and the Illinois Rivers intersect. The one important exception is the Illinois River, which is open year around.

Available barge vessel capacity and pricing is dictated by market conditions. Since the waterways are mostly used to transport commodities such as grains, fertilizer, and coal, the availability and pricing will be highly influenced by factors in those markets. For instance, last year a large amount of grain was being exported from the Port of Duluth, which increased traffic and competition for this port. This year pricing and capacity has been greatly influenced by the spring flooding. Also, many ports do not have the crane capacity to lift to lift some of the heaviest components. Cranes will need to be brought in for the project and mobilization costs should be consider in the total economics of the move.

Barge is an important, viable, and economically advantageous option for moving components within a specific geography. Barge options should especially be considered when importing and exporting overseas. 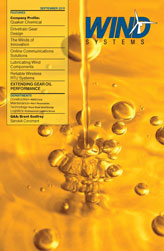 With the increase in megawatt output, turbines and associated components pose maintenance challenges