The U.S. Department of Energy established its Wind Powering America (WPA) initiative in 1999 with the goal of increasing the installed wind capacity, then around 2.5GW, to 5GW by 2005 and 10GW by 2010.  It also set goals for wind generation capacity at the state level and renewable energy consumption at the federal level of 5 percent by 2010.

In fact, by 2005 the national installed wind capacity had reached over 9GW—far surpassing the original WPA goal.  During this same time, the average generating capacity of mass produced wind turbines increased by more than 40 percent.  Wind turbines were getting taller and wind farms were growing larger.  Until this time FAA Advisory Circulars had treated wind turbines much like communication towers, requiring prescribed lighting on each structure.  Wind turbine farms represented a new type of obstruction, not a lone structure like a communication tower, and not multiple structures closely spaced together like “antenna farms,” but many tall structures spread over large distances.  The FAA’s William J. Hughes Technical Center took on the task of studying how best to mark wind turbine farms.  The study took over four years to complete and included eleven wind turbine sites in five separate states.  The result of the study, a report authored by James W. Patterson, Jr., titled “DEVELOPMENT OF OBSTRUCTION LIGHTING STANDARDS FOR WIND TURBINE FARMS” was published in November, 2005.  FAA Advisory Circular 70/7460-1K Obstruction Marking and Lighting was updated in February of 2007 and incorporates many of the recommendations of the Patterson report with the addition of Chapter 13. Marking and Lighting Wind Turbine Farms.

Marking and Lighting of Wind Turbine Farms
The following is brief summary of FAA Advisory Circular 70/7460-1K, Chapter 13, Marking and Lighting of Wind Turbine Farms.  The complete Advisory Circular is available at www.faa.gov.  Red flashing obstruction lights (FAA Type L-864) are the preferred lighting system for wind farms.  Light fixtures should be placed as high as possible on the nacelle for increased visibility.  Wind turbines around the periphery of an array of turbines should be lit.  Unlighted gaps of less than one half statue mile are allowed in many instances, however, a wind turbine located apart from the grouping of turbines should be lit.  The array of flashing obstruction lights should be synchronized to flash simultaneously.  For daytime conspicuity turbine structures painted in a bright white or light off-white color are effective.  Other colors, such as light gray or blue are less effective.

Automatic Monitoring
While the FAA Advisory Circular does allow for visual inspection of obstruction lighting systems, the size and location of wind farms is rapidly making visual inspection impractical. The Advisory Circular addresses this in stating “In the event that a structure is not readily accessible for visual observation, a properly maintained automatic monitor should be used.”  Wind turbines are typically equipped with remote monitoring capability such as SCADA (Supervisory Control And Data Acquisition).  Wind turbine obstruction lighting systems provide dry-contact alarm points that can be easily interfaced to monitoring equipment such as SCADA for alarm notification.  All available dry contact alarms on the obstruction lighting system should be monitored.  During installation, the latency of the alarm reporting should be measured to verify that it happens quickly enough to allow reporting within the 30-minute time window.  Similar to visual monitoring, the AC similarly states that “When using remote monitoring devices, the communication status and operational status of the system should be confirmed at least once every 24 hours.”

Reporting
Section 23 of FAA AC 70/7460-1K addresses light failure notification or reporting.  The AC states “Any failure or malfunction that lasts more than thirty (30) minutes and affects a top light or a flashing obstruction light, regardless of position, should be reported immediately.”  The AC includes the basic information required for reporting an obstruction light outage, however, it refers the reader to the “telephone book” or to www.afss.com (Automated Flight Service Station) web site for information on who to contact to report outages.  Unfortunately, neither of these resources provides quick access to the contact information for reporting an outage.  A valuable resource that clearly presents this information is the FAA’s Obstruction Evaluation / Airport Airspace Analysis (OE/AAA) web site (https://oeaaa.faa.gov).  In the left side bar of this the page there is a link for “Light Outage Reporting.” The Light Outage Reporting page lists the toll free numbers for reporting, 877-487-6867, for Alaska 800-478-3576, as well as detailed information that will be required to complete the report.  This site has many other useful resources in the sidebar so it is worth spending some time exploring. When you call the toll free number, you will be connected with Lockheed Martin Flight Services. An automated system will ask you “What state are you departing from?”  You should answer will the name of the state in which you wish to report the outage. You will then be directed to Flight Service Specialist who will ask you for information regarding the outage.  The list below is an example of the minimum that should be recorded for an obstruction light outage report.  This list also contains much of the information the Flight Service Specialist may request. Figure 2

• Your name and the name of your company or organization
• Your phone number
• Name or identification number of the structure.
• The type of Structure
• Location of structure (latitude/longitude)
• Height of structure above ground level (AGL)/above mean sea level (AMSL)
• Nearest Airport to the structure with the outage.
• A return to service date (usually assumed to be 15 days)
• Your initials (usually given using the NATO phonetic alphabet, ie. “Alpha-Zulu”)
• Flight Service Specialist initials for the outage report
• Date and time of the outage report

The Flight Service Specialist will issue a Notice to Airmen (NOTAM) describing the outage.  NOTAMs are associated with airports so you may be asked for the airport nearest the structure with the outage.  You may also be asked for the “ASN” or “ASR.” For telecommunication structures this is the Antenna Structure Registration Number, but for wind turbines and MET towers you will not have such a number. The Flight Service Station processes an average of 13,200 obstruction light outage NOTAMs each month.  Since most of these NOTAMs are issued for communication and broadcast towers it is often assumed you are reporting on a structure that is regulated by the FCC.

A NOTAM will be issued that will last 15 days after which time it will automatically be canceled.  If additional time past the 15 days is required to repair the outage, call before the NOTAM expires and request to extend the NOTAM.  Rather than let the NOTAM expire, call and cancel the NOTAM when a repair has been completed and the lighting system is functioning correctly.  Allowing NOTAMs to expire is at least considered bad housekeeping. In the world of telecommunications, FCC licensees risk fines when a NOTAM is allowed to expire.  In addition to the information listed above the date and time that the NOTAM was canceled should be recorded as well as the initials of the Flight Service Specialist who canceled the NOTAM.

Keeping an up-to-date database of information on each structure equipped with obstruction lighting is essential to facilitating the timely and accurate reporting of light outages.

Reporting via the Internet with e-NOTAM II
At a time when everything is changing through internet connectivity one might wonder why you have to pick up a telephone and call a toll free number to report a tower light outage.  The FAA has undertaken the Federal NOTAM System (FNS) modernization initiative and it is approaching completion.  Companies providing tower light monitoring services, like my employer International Tower Lighting, LLC (www.i-nocc.com), already use FNS NOTAM Origination Service (FNS NOS) to electronically file NOTAMs, and “Sponsors” such as wind farms, broadcasters, and wireless infrastructure providers are being provided with access to e-NOTAM-II (EN-II) Web Application to request NOTAMs using a web portal.  The EN-II web site contains a new user registration link that can be used to request access.  EN-II accounts must be individual so each person who will need to file NOTAMs must register at https://notams.aim.faa.gov/en2/.

Going Further
While the FCC does not have regulatory authority over wind farms, it may be of benefit to review some of their requirements.  FCC rules in 47 CFR §17.47 require quarterly light Inspections.
47 CFR §17.47 “The owner of any antenna structure which is registered with the Commission …. Shall inspect at intervals not to exceed 3 months all automatic or mechanical control devices, indicators, and alarm systems associated with the antenna structure lighting to insure that such apparatus is functioning properly.”

Performing and documenting quarterly light inspections would be an appropriate practice for wind farm operators to consider adopting.

Conclusion
While the majority of this article has dealt with FAA Advisory Circular 70/7560-1K requirements for reporting light outages and filing NOTAMs, a NOTAM is not a substitute for a properly functioning obstruction lighting system.  The Advisory Circular makes this point well:

“Sponsors should keep in mind that conspicuity is achieved only when all recommended lights are working. Partial equipment outages decrease the margin of safety. Any outage should be corrected as soon as possible.” 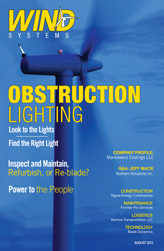