What role do you see wind power playing in the country’s future energy portfolio?

Wind energy promises to play a critical role, and the Department of Energy (DOE) is dedicated to supporting projects that will advance wind turbine technology and reduce market barriers. Our nation has long been a leader in this market. By the end of 2010 the United States had the second-largest amount of installed wind energy in the world, with a total of more than 41,000MW of installed land-based wind capacity, and that number is growing. The U.S. installed more than 5,000MW of wind in 2010 over 2,000MW so far in 2011, representing roughly 25 percent of all new domestic electric generation capacity. Wind power has the potential to provide a much larger share of our nation’s electricity.

The U.S. enjoys abundant wind resources both on land and offshore, but despite significant growth in installed capacity much of this resource remains untapped. In 2008 the DOE published the “20% Wind Energy by 2030: Increasing Wind Energy’s Contribution to U.S. Electricity Supply” report, which found that it is technically feasible for wind energy to generate 20 percent of the nation’s electricity demand by 2030, which will make a significant contribution toward achieving the administration’s goal of generating 80 percent of our nation’s electricity from clean resources by 2035. Additionally, given the abundance of offshore wind resources, the DOE plans to support the development of 54GW of offshore wind energy by 2030.

Do you see a future where wind energy is derived from multiple platforms, such as community/distributed wind, “big wind” farms, and offshore developments?

While the wind energy technologies manufactured and deployed in the U.S. already span a wide range of sizes and nameplate capacities, the majority of electricity produced comes from utility scale turbines on land-based farms. The number and types of applications for wind turbines will likely expand in the coming years as technological and financial model advancements allow for more favorable project economics in offshore and community wind. Likewise, the availability of technologically advanced wind turbine designs and sizes will be increasingly important. Although the U.S. has not yet installed any offshore wind turbines, there are currently nine proposed projects that have advanced significantly in the permitting and development process.

As the U.S. industry develops, projects will presumably employ deepwater wind turbine technologies that are still in development, providing an opportunity for domestic developers and manufacturers to produce next-generation designs. The DOE is supporting offshore development efforts actively, with over $50 million recently awarded to speed technical innovations, lower costs, and shorten the timeline for deploying offshore wind systems. The 47 projects across 20 states will advance turbine design tools and hardware, improve information about offshore wind resources, and accelerate offshore deployment by reducing market barriers such as supply chain development, transmission, and infrastructure. Offshore wind energy can provide access to a vast, clean, domestic renewable resource that can help the U.S. meet its critical energy, environmental, and economic challenges. These awards will also help the U.S. to compete in the global wind energy manufacturing sector, promote economic development and job creation, and support the development of emerging industry.

Regarding the midsize turbine market, it has faced limited new technology development and manufacturing in spite of increased interest. Few manufacturers offer wind turbines with nameplate capacities in the range of 100kW to 1MW, a size that allows installation near the consumer and minimizes the need for new electric transmission lines. Demonstrating our commitment, we announced a competitive solicitation in May 2010 aimed at reducing the cost of energy of midsize turbine technology by driving innovation.

How is this administration supporting the current and future growth of wind energy in the United States?

These ambitious goals I’ve mentioned will go far in increasing the nation’s energy independence, and will create great opportunity for economic advancement and job growth. The DOE is supporting these goals through critical investments to improve technology and ramp up development. For example, the American Recovery and Reinvestment Act injected much-needed funds to jumpstart this sector and others, investing funds in several wind projects and supporting businesses that are developing and testing the next generation of large wind turbines. The Obama Administration understands that achieving energy independence demands a comprehensive and long-term commitment to wind energy and other renewable energy sources.

To learn more: Go to www.energy.gov. 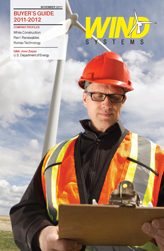