With the proper planning and by incorporating some of the best experience from European models, the U.S. should be able to roll out robust offshore wind development.

Bold action comes from bold ambition, and ambitions don’t come much bolder than the United States’ plan to scale up offshore wind capacity from 42 MW to 30 GW by 2030. That goal will require wind farms across almost the entire coastline, yet today there are no commercial-scale offshore wind farms operational in the country.

This will require an unprecedented pace of development. The U.S. is not allowing itself the luxury of the multi-decade timescales European pioneers such as the U.K. have allowed themselves. That’s OK though, because the U.S. is not starting from zero and can build on the expertise and technology developed in Europe to accelerate the roll-out — and after all, if any country has proven its ability to deliver on supersize projects, it’s the U.S.

How exactly then, can the U.S. incorporate the best of the European offshore wind industry to meet its ambitions? It helps to be specific, so let’s focus on supporting installation infrastructure and supply chains.

The Problem of Ports and Vessels

Installing and commissioning turbines offshore requires a variety of specialized vessels, ranging from wind-turbine installation vessels (WTIVs) to jack-ups, crew-transfer vessels, and cable laying vessels. These, in turn, rely on specialist port infrastructure shoreside to load, service, and deploy them.

The U.S. has a shortage of the necessary specialized vessels. An obvious solution would be to source them from elsewhere, but this avenue is restricted by the Jones Act, which prevents foreign-built, owned, or manned vessels transporting goods between U.S. ports and, therefore, hinders the import of fleets from more mature markets. Eversource and Orsted recently announced construction on a 260-foot wind-farm service operations vessel, following behind Dominion Energy’s Charybdis, the first Jones Act-compliant WTIV, projected to be sea-ready by 2023. The tight timelines involved in installing 30 GW by 2030 render it unlikely that a new compliant vessel supply will suffice, even if the order book balloons tomorrow — designing and commissioning such vessels is itself a multi-year undertaking. However, the challenge is surmountable. Indeed, the Jones Act has been in place since 1920, and in that time, another offshore industry with similarly complex requirements has thrived — the Gulf of Mexico oil and gas sector.

Possible workarounds include operating out of Canada for projects in the Northeast or relying on U.S.-flagged barges. The Jones Act applies from port-to-port, so for example, components could possibly be transported from the shore by barges to waiting WTIVs that have sailed from Europe or Asia.

Such solutions come with ingrained inefficiency and don’t obviate the need for investment in U.S. specialist vessels, but they can make the short-term pain less acute.

The U.S. also lacks a fully established domestic supply chain for offshore wind as of today; relying on an internationally dispersed and disparate supply chain could also impede development. Capital projects worldwide — and not just in the offshore wind sector — are suffering from materials shortages at the time of writing, and that problem is harder — and more expensive — to manage when suppliers are extremely remote.

As an added incentive to build out the domestic supply chain for the sector, local economies can be bolstered by local content and skilled employment opportunities. This is particularly important in the U.S., which takes pride in supporting a healthy ecosystem of independent service and equipment suppliers such as those so prevalent in the Gulf of Mexico and in the onshore oil and gas sector.

Fortunately, there are signs that elements of the U.S. offshore wind supply chain are clicking into place. Homegrown giants and specialists such as GE and Oceaneering have rich expertise earned abroad to bring to bear at home. Then there are other companies doing the reverse — taking expertise developed in far-flung home markets and applying it to the States. For example, the likes of JDR (U.K.) and Prysmian (Italy) have made strides in manufacturing subsea cables out of the U.S., and supermajor BP is poised to leverage expertise built in U.S. onshore wind, U.S. offshore oil and gas, and European offshore wind to move quickly in the space.

This appears to be a winning combination — a balance of American companies supplying American projects, and specialists from abroad plugging the gaps by creating American jobs in the process. However, there is a significant stumbling block in this regard, as it can be difficult for foreign companies to know where to base their U.S. operations. Different states apply different offshore licensing rules, employment law, taxes, and incentives, and it’s impossible to know. The day after a decision is made, another state may announce an even better deal, leading to decision paralysis. In time, this problem will fade as different areas generate a critical mass of certain businesses and become the de-facto centers of gravity for their respective niches — but time is of the essence, and an expedited solution would help maintain momentum.

All Eyes on Martha’s Vineyard

There is an urgent imperative to integrate and simplify buying services across a complex, far-flung international supply chain. U.S. developers could benefit from neutral conveners capable of bringing together an ecosystem of equipment and providing an integrated end-to-end offering from equipment sourcing to operation.

In this context, it will be instructive to watch the progress of the 800-MW Vineyard 1 project off the coast of Martha’s Vineyard — “a project that the industry has long treated as a harbinger of the industry’s fortunes” and the first commercial scale offshore wind farm in the U.S.

At Motive Offshore, our knowledge and experience from working on wind projects across the U.K., Taiwan, and Europe allows us to supply reliable cable handling, lifting, and pulling equipment on both a purchase and rental basis to the offshore wind market. Our expert global teams also provide inspection services to the specialist vessels, which are vital to sustaining safe and efficient wind operations offshore. This can expand to include everything from equipment sourcing and testing to mobilization and operation under one umbrella. To date, we’ve provided support to more than 30 large, global offshore wind projects such as Greater Changhua in Taiwan, Seagreen in the U.K., and Vineyard in the U.S.

The U.S. can benefit from Europe’s more mature offshore wind market, which has been able to join up everything from supply chains to design and engineering — both by sourcing services and components directly and by looking to its development for instruction. If it can get the balance right, the nascent U.S. offshore wind industry could become a tremendous source of jobs and wealth for the country and even bring that lofty 30 GW by 2030 target within reach. 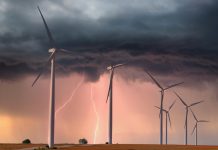