Wind turbines are awe-inspiring machines. Rising hundreds of feet into the sky, with their blades spinning majestically, they make a humming sound that I find pleasant. It seems as though nothing could ever bring them down. Since I admire these structures my thoughts often turn to what keeps them going day after day, diligently doing the duty of creating energy, and it occurs to me that one of those components is fairly easy to identify—fasteners. With the recent attention given to an Ohio-based fastener manufacturer by President Barack Obama, now seems like a good time to re-examine the critical nature of a component that has been dismissed as a “commodity” by too many buyers and engineers in the user community. Power generation from wind depends on bolts, studs, screws, and nuts, from the structural bolting patterns at ground level all the way to the generator high in the air.

An improperly designed joint, a substandard screw, or even a loose nut can bring the entire operation to a stop. It can happen suddenly or take many months, going unnoticed until the final failure occurs. There are three basic elements to a sound joint: good joint design, proper assembly and maintenance of the joint, and consistent high-quality fasteners. Proper joint design is both a science and an art, and the engineer should keep in mind what has worked for similar applications in the past, since the history of wind turbines is relatively brief. Many U.S. manufacturers are putting their components into turbines for the first time, in fact. It may be useful to review the basic steps of bolted joint design. First the basic geometry of the joint should be considered, and the material of the clamped parts. Give thought to the number of axes in the joint, and make the initial selection of joint materials. Second, calculate the magnitude, direction, and introductory point of the external forces acting upon the joint, and whether they are static or dynamic. Determine the acting temperature range of the joint and coefficients of thermal expansion of the mating parts. Next, select the material properties, size, drive style, and thread type of the fastener. Fasteners act like springs in storing energy to resist external forces that work to separate clamped parts. Long, slender screws are the best choice.

A 1:4 or even 1:6 diameter to length ratio is desirable. Estimate the clamp load required for keeping the joint functional. Develop a force diagram, as shown in Fig. 1. Now calculate the mating material’s capacity to resist embedment while keeping in mind other setting force losses. Determine safety factor desirable for the joint. Now, the most important step: test the joint in application under realistic conditions. The second element of a sound joint—proper assembly and maintenance—has new challenges in wind power applications. The forces involved in these applications may differ from those in the original design. Fastener maintenance on a wind turbine will present unusual challenges—working height, space restrictions, and awkwardness of tool use in various weather conditions. This must be dealt with at the design level. Assembly and maintenance of the bolted joint must be realistic. Keep in mind that preload or tension is the goal in maintaining the fasteners. If direct tensioning of screws cannot be achieved, or clamp load indicating devices are not appropriate, then it is good to know about the relationship between torque and tension. Torque and tension have a linear relationship. and it is examined most easily by a brief treatment of the short form torque equation and a review of a study published by the fastener industry outlining various means of tightening screws.

The short form torque equation is: Tin = KxDxP, where Tin is the input torque, K is the nut factor (loosely equivalent to a coefficient of friction), D is the stress area of the screw for inch series parts, or nominal diameter for metric parts, and P is the desired preload. It has been estimated that there are over 250 factors that influence the value of K. Most fastener manufacturers publishing recommended installation torque charts have tested hundreds of their screws to find an average value for K in steel or another specified material and expect a scatter of plus or minus 20 percent. What are a few of those 250-plus factors making up K? Thread fit and condition of the mating threads, the finish on the fasteners and clamped parts, the means of assembly and frequency and means of maintenance, and whether a fastener has been previously installed and in service are just a few. Poor thread fit and condition not only hinders installation, it subtracts from clamp load achievement. Tab. 1

Properly rolled threads on a screw, rerolled to smooth out nicks picked up in processing, assure a consistency in stretching the part to desired preload. Plating or coating screw threads or nut threads changes the relationship between torque and tension. For instance, zinc plating increases friction between the threads, while nickel reduces drag. Organic finishes can be modified to different friction coefficients but care must be taken in choosing organics. The thickness of the coating needed to achieve the corrosion resistance desired can interfere in mating parts if that thickness is not accounted for in the screw design. Torque, when used as a means to achieve tension has variability, stemming from the tools, the operator, and even the conditions at the time of installation.

Fig. 2 shows the variability of preload as a result of using certain means of installation. Other factors influencing clamp load in assembly or maintenance are tightening sequence, initial relaxation of the joint and improper use of mating fastener components. Fasteners lose 5-10 percent of initial clamp load in the first 24 hours after tightening. Screws in a joint should be tightened using two or three snugging passes then a final tightening to desired torque. It should be done in a pattern designed to spread the load equally among the screws and so as not to create prying action felt by any screw. The correct choice of mating fasteners should not be taken lightly. Screws and nuts should be strength matched. Having a nut the same strength as the screw ensures that the nut threads fail first, because they are actually a bit stronger than the screw threads. A failed nut is more easily detected than a broken screw.

Hardened washers should be used when needed under hardened screws and nuts to increase the effective bearing area of the joint. Split lock washers used to prevent loosening under the heads of hardened screws actually hinder the performance of the joint. Conical washers and disc springs can increase the effective length of a screw, allowing it to develop more preload to resist external forces. Reuse of fasteners previously installed can be covered in three words—don’t do it! The relationship between torque and tension assumed during the original installation changes with subsequent reuse. The second time a screw is torqued to the recommended value, the clamp load achieved is reduced. Fastener manufacturers’ recommended installation torque data presumes certain conditions and mating materials that are usually spelled out in the chart. The values are not meant for anything other than new screws in “as received” condition. Most often taken for granted is the third element in a sound joint: consistent, high quality fasteners. Making the correct choice for any application involves more than simply selecting the tensile strength of the fasteners. There are preferred methods of manufacturing for high strength screws. Threads should be rolled and have radiused roots, and the fillet between head and body should also be radiused. The wire chosen should be free from harmful inclusions and properly prepared for the heading process. In extreme fatigue applications screws can have reduced diameter bodies effectively lengthening them. Thread can be rolled after heat treatment for greater strength. Fastener specifications called out should be reviewed before inclusion on a drawing. Too often I hear from engineers that standards are all the same. While much has been done in the past few years to rationalize international standards, differences remain.

Dimensionally ASME, ISO, and JIS standards are very similar and have many overlapping tolerances. Generally they may be considered “functionally” equivalent with regard to dimensions. The same cannot be said in all cases for high strength fasteners when it comes to mechanical properties and permissible discontinuities. For instance, ASTM A574 and A574M, governing inch and metric socket head cap screws, do not permit laps and seams below the pitch diameter of the screw thread. ISO 6157-3 governing high strength socket cap screws for special applications permits certain laps and seams below the pitch line. In effect, the standard allows a manufacturer to produce a screw designed for a tough application to have flaws in the smallest cross sectional area of the screw. Those thread laps and seams are a contributing factor to fastener and joint failure. Socket head cap screws and other high strength threaded products can be made without flaws in this critical area as proven over the last 100 years by many respected screw manufacturers. Proper raw material selection and maintenance of threading dies eliminate most issues. The best screw manufacturers continue to test production pieces every 30 minutes to ensure that the parts being run are defect-free.

Parts are taken from the machine, sectioned, placed in a mount, and then examined microscopically for the absence of thread laps. The cost difference for this benefit—critical to every part of a wind turbine that helps it work—is a matter of pennies per fastener, not dollars. What is the cost of downtime for a turbine, small or large? Couldn’t we estimate it as hundreds, thousands, or even hundreds of thousands of dollars? Finally, regardless of where or how a fastener is used on a wind turbine let me implore you to know your supplier. There are many notable manufacturing companies around the world that test the worthiness of components from outside suppliers regularly, and they purchase only from those who are approved. Fasteners, if not a part of that list of “from approved sources only” components, should be a part of it. Keep a record of the manufacturers’ markings stamped into the fasteners of your approved sources. One example, on a socket head cap screw, is shown in Fig. 3.

It doesn’t make sense to let an inexpensive yet integral piece of a wind turbine be the thing that brings it to a painful halt. Threaded fasteners have held the world together for 500 years. They should never be dismissed as a commodity. 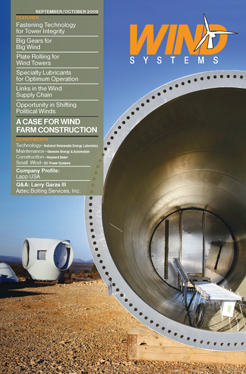