Gamesa and the Mexican Electricity Board (the CFE for its acronym in Spanish) have signed a memorandum of understanding (MoU) for the fostering of wind power generation in Mexico by means of the co-development of wind energy projects.

The two companies have pledged to search for ways to encourage technological, industrial, and supply chain development in the sector in Mexico and to champion research, development, and innovation in the renewable energy field. The MoU also contemplates the possibility of the CFE studying opportunities for participating in wind projects in which Gamesa has a stake in other Latin American markets and the U.S. In addition, the MoU will promote the extension of best practices in wind farm operations, maintenance, and control.

Construction of a Tower Factory in Mexico
Against the backdrop of this agreement and with the aim of contributing to the sector’s technological and industrial development in Mexico, Gamesa, the leading OEM in this market, is planning to build a wind tower factory through Windar Renovables, the joint venture with the Daniel Alonso Group.

The factory will be located in Puerto Altamira, in the state of Tamaulipas, a high-potential wind region. Stretching 75,000 m2, the center will have enough capacity to manufacture 500 MW per year for the Mexican, U.S., and Central American markets. The construction work was scheduled to begin in December 2015, and the factory should be up and running by the end of 2016.

Gamesa is also planning to step up the renewable energy training and research activities it already carries out in Mexico through the existing Gamesa University located in Juchitán where local people specialize in operations and maintenance tasks.

“This MoU with the CFE highlights Gamesa’s commitment to the Mexican market where, in addition to developing and on-selling wind farms, it supplies, installs, and services wind turbines,” Suárez said. “Execution of this agreement will lead to the creation of hundreds of jobs in the tower manufacturing area and by nurturing a local supply chain capable of manufacturing major parts not only for the Mexican market, but also for the U.S.”

Since it began doing business in Mexico in 1999, Gamesa has been active in its capacity as an OEM, having installed over 1,700 MW and, as a wind farm developer, with more than 700 MW complete and a sizeable pipeline at various stages of development.

For more information,
go to www.gamesacorp.com. 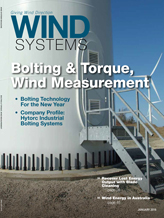