MidAmerican Energy Company has completed work on four of the five wind farms that make up its 1,050-megawatt Wind VIII project — the largest economic development project in Iowa history.

The three wind farms completed in 2014 — Lundgren in Webster County, Macksburg in Madison County and Wellsburg in Grundy County — account for a total of 511.4 megawatts of wind generation capacity, to go along with the 44.6 megawatts of generation capacity at the Vienna II wind farm in Marshall County, which was completed in 2013. The final piece of the Wind VIII project — the 495-megawatt Highland wind farm in O’Brien County — will be finished by the end of 2015.

“With more than half the turbines in our Wind VIII project up and running, we’ve reached a major milestone in the development of another sustainable energy solution for our customers,” said Adam Wright, vice president, wind generation and development for MidAmerican Energy. “By 2016, we’ll be able to produce enough energy from wind to meet the equivalent of approximately half of the electricity needs of our retail customers.”

The Wind VIII project, announced in May 2013 during a joint press conference with Iowa Governor Terry Branstad, represents an investment by MidAmerican Energy of up to $1.9 billion. With the addition of Wind VIII’s 448 turbines at the five wind farm sites, the company’s wind generation fleet will expand to 1,715 turbines, which can produce enough energy to power the equivalent of more than one million average Iowa homes.

“We are extremely proud of our progress over the last decade in the development of wind energy,” Wright said. “We constructed our first wind farm in 2004, and today MidAmerican Energy is a national leader in wind generation.”

Wright noted that wind energy offers many benefits for MidAmerican Energy customers, communities and the environment.

“Unlike many other forms of energy, wind generation has no fuel costs associated with it, so wind energy helps keep electricity rates stable and affordable for our customers over the long term,” he said.

That’s music to the ears of Iowa officials charged with attracting new business and industry to the state. MidAmerican Energy’s investment in wind energy — by 2016 the company will have spent nearly $6 billion on wind generation projects — has helped make Iowa the nation’s leader in the percentage of energy derived from wind. Both Iowa Governor Terry Branstad and Lieutenant Governor Kim Reynolds have championed wind as an integral component of Iowa’s energy future and a competitive advantage in attracting major tech companies such as Google, Microsoft and Facebook to build facilities in the state.

The economic benefits of wind energy are being felt in communities throughout Iowa. Wright noted that the Wind VIII project provides annual lease payments to the owners of land where wind turbines are constructed and will generate more than $360 million in additional property tax revenues over the next 30 years, benefiting local schools, communities and county governments. Approximately 1,000 construction jobs are being added to the state’s economy during the two-year construction period, and approximately 40 new permanent jobs will be created by the project.

Tom Leners, executive director of the Madison County Development Group, said the Macksburg wind project has been a positive development for residents of the county. “Money spent here during the construction process has been a boon to local businesses, and the additional property tax revenues will benefit local government, schools and all residents in the years to come,” Leners said. “We’ve been pleased to partner with MidAmerican Energy to bring new economic opportunity to this area.”

Wright foresees a bright future for wind generation. “Our customers want more non-carbon energy sources,” he said. “Wind is a key element of MidAmerican Energy’s balanced approach to energy generation, and can be a factor in helping us reduce our carbon intensity and meet more stringent environmental standards. Our decade of investment in wind projects has been good for our customers, good for the environment and good for the state of Iowa.”

MidAmerican Energy Company provides electric service to 739,000 customers and natural gas service to 719,000 customers in Iowa, Illinois, Nebraska and South Dakota. It is headquartered in Des Moines, Iowa. Information about MidAmerican Energy is available on the company’s website, Twitter, Facebook and YouTube pages, which can be accessed via www.midamericanenergy.com. 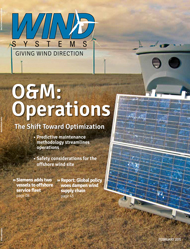 Grounding: The Key to Lightning Protection