Wind speeds during India’s annual monsoon season have fallen by as much as 9 percent over the past two decades, with three of the past four years also below average. This is according to research by Vaisala, a global leader in environmental and industrial measurement. Vaisala’s latest analysis, performed on global reanalysis datasets, highlights the impact of this decline, both on wind-energy production and on the suitability of long-term averages as a reference point for wind energy yield estimates.

Installed wind power capacity in India has rapidly expanded in recent years, currently totaling more than 32 GW and accounting for close to 10 percent of India’s total power generation capacity, and the country typically sees its strongest winds during the southwest monsoon season.

However, it is clear that this fall in wind speeds presents challenges to the wind industry’s ability to undertake accurate long-term forecasting and to asset-owners looking to effectively plan and budget on the basis of these forecasts.

Using data derived from NASA’s MERRA-2 dataset, Vaisala has analyzed long-term wind speeds at seven significant regions for wind development in India. In each case, wind speeds trended downwards over a 20-year period up to 2017, but with significant variation in the extent of the decline — ranging from 9 percent at wind farms in Rajasthan to 2 percent at those in Karnataka. These results are partially corroborated by climate research from the Indian Institute of Tropical Meteorology, which shows a 40-percent reduction in surface wind speeds during monsoon season over the past four decades.

Despite this, analysis of performance over the past 12 months reveals above-average wind conditions in several regions, highlighting the importance of location when considering longer-term trends.

“It’s important to note that the declines didn’t happen across the board — for example, wind speeds were markedly higher than normal in parts of Uttar Pradesh during August and September, and higher in central India during July,” said Rajni Umakanthan, managing director of Vaisala subsidiary 3TIER India. “A scientific approach to both wind-resource assessment and energy forecasting can allow investors to minimize their risk and operators to budget effectively.”

As a result of observed changes to the wind resource, a number of independent engineers have shifted their reference point from 20 to 10 years, but this creates additional challenges, as a shorter record will naturally introduce greater uncertainty into estimates and increase the possibility that they will not accurately reflect long-term energy production.

Vaisala’ s Energy Risk Framework, developed in 2012, was designed to account for the possibility that long-term trends or jumps in mean wind speed might occur due to climate change. Using re-analysis data, the Energy Risk Framework adjusts and refines long-term estimates by defining the likelihood that recent wind speeds are consistent with past data.

“Our analysis illustrates the stark decline in Indian monsoon wind speeds — both year-on-year and over the past two decades — and is consistent with results recording weaker surface wind speeds,” Umakanthan said. “Our Energy Risk Framework seeks to address this by comparing recent wind speeds with long-term performance data, defining the likelihood that recent data is consistent with past performance. A shortening of the long-term climate reference is then calculated and applied when appropriate to refine the energy due diligence process and provide asset owners with the best reference possible.”

Vaisala continues to refine the Energy Risk Framework by incorporating additional wind-speed analysis and testing conducted as part of its continuous validation process.

For more information, go to www.vaisala.com 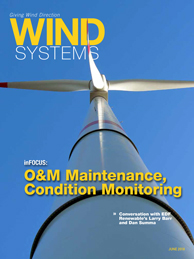