Can you tell us a little about Laufers Wind’s obstruction lighting system for wind farms? How does it work?

How did the idea for this alternative approach to obstruction lighting come about?

Many small airports have pilot-controlled lighting on their runways. The bright runway lights are off until needed, and can be controlled via a pilot‚Äôs radio when coming in for a landing. The ADSS is essentially an automated, radar-controlled version of that system for obstructions. It‚Äôs important that stationary obstructions be lit in order to warn aircraft pilots against possible collisions, but the lights don‚Äôt need to be on when there are no aircraft around.

Currently, the Federal Aviation Administration Advisory Circular regarding obstruction lighting (70/7460-1K) does not mention radar-control. What is the current status regarding the system with the FAA?

We believe the FAA is doing a fine job of balancing the needs of the wind industry with their principal mandate for aviation safety. They are reviewing draft language now. I hope the updated FAA Advisory Circular, which contains a new section on radar activated lighting called Aircraft Detection Systems, comes out by the end of 2013.

Tell us about your company’s relationship with the wind energy industry in the development of this system?

We are in communication with various obstruction light vendors so that the proper interfaces between their technologies and ours can be worked out to maximize safety and performance. We also speak with various turbine manufacturers to understand the best methods for integration for wind farm deployments. Finally, we work with developers to let them know that they have a new arrow in their quiver in dealing with objections from local communities and in mitigating impact on the avian population.

Laufer places a good deal of emphasis on  improving nighttime aesthetics due to the ADSS. Can you talk about that a little?

With an ADSS system deployed on a wind farm, the nighttime aesthetic impact is near zero. There are not that many low-flying general aviation aircraft flying at all hours of the night in areas where wind farms are located. When the lights do come on, nearby residents can be confident that there is a specific safety purpose for that action.

Laufer states it believes the ADSS is the safest obstruction lighting system coming to market. How so?

The Laufer Wind ADSS is the only radar-activated lighting system that has been engineered from the ground up for the specific application of controlling obstruction lights on wind farms. We also believe that we have the most robust systems engineering which will activate the lights in the event of component failure, which will be a requirement from the FAA.

Obstruction lighting is often cited by the ‚”NIMBY” crowd as an argument against wind farm development. Does the ADSS  help to ease that tension?

We believe that deploying the Laufer Wind ADSS on a wind farm provides the best solution for addressing NIMBY concerns about obstruction lighting, while still meeting the marking requirements from the FAA. 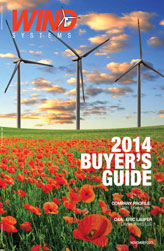